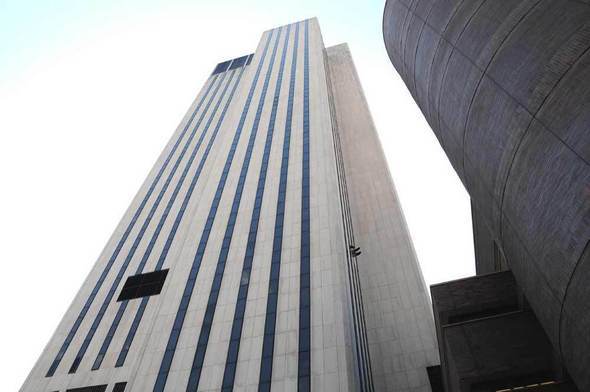 The 32-story building opens for business this month with one customer, the New York Genome Center, which will house servers there for its computing-intensive work in genome sequencing. Sabey is betting that the data center's prime location in New York City's business district, and the building's state-of-the-art infrastructure, will attract many more customers in the finance, healthcare, retail and technology industries, as well as Web companies, startups and government agencies.

The data center, called Intergate.Manhattan, sits at the foot of the Brooklyn Bridge. It's also next door to the headquarters of the New York Police Department, which company CEO David Sabey said assures a secure perimeter.

The building, at 375 Pearl Street, opened in 1975 as a telecommunications switching center for New York Telephone. That's key because, even though the facility is 38 years old, it has many of the design characteristics required of modern data centers: basement-to-roof cabling shafts, diverse network access points and, with capacity for 40 megawatts, loads of electricity. Verizon still occupies three floors of the building.

Sabey's data center has 32 stories, yet it's much taller than one would expect, at 540 feet. That's because the ceilings, designed for a telephone switching center, are higher than in a typical office building.

Sabey gutted the former switching center, used computer-aided design for the interior, and brought in new electrical and cooling systems and diesel-powered backup generators. The company describes the facility as "a fortress," and says critical infrastructure isn't at risk of flooding if another Sandy-size storm brings water into lower Manhattan. The data center's electrical systems are on the second floor, 33 feet about ground level.

At the official opening, New York City Mayor Michael Bloomberg said the new data center will support growing demand for state-of-the-art data center capacity as the city positions itself as a center of technology development and talent and tech-enabled businesses. "This is wonderful for the city," Bloomberg said.

All photos, unless otherwise noted, by John Foley.