Sentiment analysis is hot among financial-market traders, so why not for that other great betting domain, sports?
Seth Grimes
Contributor
January 26, 2012
Wall Street wizards are tallying social and news sentiment in order to predict share-price movements. What are the odds that sentiment technologies can predict sports outcomes?

Sentibet, currently in beta, applies text analytics to sports-related tweets, extracting wishes, feelings, and predictions from tweets about specific sports and games. The output is a Sentiment Based Forecast (SBF) for each event, presented graphically with options that allow you to filter and explore the data.

[ Want more on sentiment analysis? Read Get Close To Customers Through Social Media . ]

Click on the thumbnail image below to see Sentibet's read of more than 6,600 tweets about Super Bowl 46 as of January 26. Or jump right to the site to check out the latest fan sentiment.

Neurolingo's Mnemosyne language-analysis platform (which is explained in this video presentation) seems to be on the right track. (I don't have any business relationships with Neurolingo, but I am hoping the company will present on Sentibet at my upcoming Sentiment Analysis Symposium in New York.)

The Sentibet dashboard is nice enough, although it could use interface improvements and better response times: it should take less than eight seconds, the average lag I experienced, to bring up an analysis. But Sentibet is still in beta; these are points to work on. 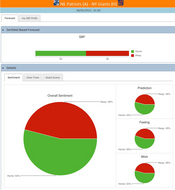 Sentibet's read of Super Bowl sentiment.
To explore the analyses, try the Most Tweeted and Finished Games tabs, clicking through to a particular match.

The prediction/feeling/wish categorization is conceptually quite interesting. It reflects the richness of human emotion, that we may have a variety of different purposes and meanings when we express seemingly similar feelings, attitudes and opinions. That you hope Manchester United will beat Arsenal doesn't mean you think a draw won't be the outcome.

I also liked the Team A (Home)/Team B (Away)/Draw categorization. It's goal-aligned. We're interested in which team you predict, expect, or hope will win, not whether you like or dislike (or are indifferent about) a team. Consider: You might think that Penn State football is great, or that the team's handling of its recent scandal was reprehensible, but a positive/negative/neutral sentiment classification--an approach that's typical of the Twitter-sentiment toys that are far too common--is off little help to odds makers.

The best part is that you can view the tweets behind the classifications, and you can apply filters to select only tweets in certain categories. I was skeptical of the analysis displayed: 2% of tweets on an Arsenal-Manchester United match wished for a draw! Who hopes for a draw? Well, SentiBet got it right.

One tweet read "@darrenpage1983 revenge weekend spurs bt man city or atleast don't get stuffed 5-1 arsenal man u would like to c a draw there." Another read, "@Slickon_CFC Good Morning guys. Its super sunday today and i'm hoping for a City win and a draw between United and Arsenal. #Top3." And a third example read, "@annemacey02 @Betherz_BCFC I want my spurs to thrash manc and a manu arsenal draw."

Note the fine points: the NLP technology correctly sees "Manchester United," "man u," and "manu" as one and the same. It also distinguished two different matches in a single tweet. This is strong text analytics.

It's a good sign when an app leaves you hungry for more data and additional analysis. Sentibet does. Within the Finished Games area, for example, it would be interesting to be able to correlate scores and forecasts, to understand the relationship between tweet aggregates and match outcomes. How well do Sentibet forecasts predict final scores? That's a Neurolingo work in progress, as explained on the Sentibet Post Game Analysis page.

It would be even cooler to connect forecasts and betting lines, that is, bookmakers' odds. As the expression goes, "The proof of the pudding is in the eating." If you consider sports betting as a business, the payoff isn't in scores predicted, it's in your gambling winnings. Financial-market traders exploit the price-expectation gaps, and so do winning gamblers. That's another to-do for Neurolingo.

Scandalos tells me that Neurolingo is seeking financing to accelerate service development and also that Sentibet is just one application of the underlying Mnemosyne platform, meant to demonstrate possibilities to potential customers and investors. Judging from Sentibet, Neurolingo seems like a good bet.

Seth Grimes is an analytics strategy consultant with Alta Plana and organizes the Sentiment Analysis Symposium. Follow him on Twitter at @sethgrimes.