SEARCH
A minimum of 3 characters are required to be typed in the search bar in order to perform a search.
Announcements
Event
SupportWorld Live: May 15-20, 2022 | MGM Grand, Las Vegas, NV
Event
Data Center World is the leading global conference for data center facilities and IT infrastructure professionals.
Report
IT Enterprise Dashboard: This interactive data tool enables access to global research on IT budgets, business challenges
Event
Get in-depth insights & analysis from experts on all aspects of communications, collaboration, & networking technologies
Report
Find out what you need to know so that you can plan your next career steps and maximize your salary.
PreviousNext
Information Management
Slideshow 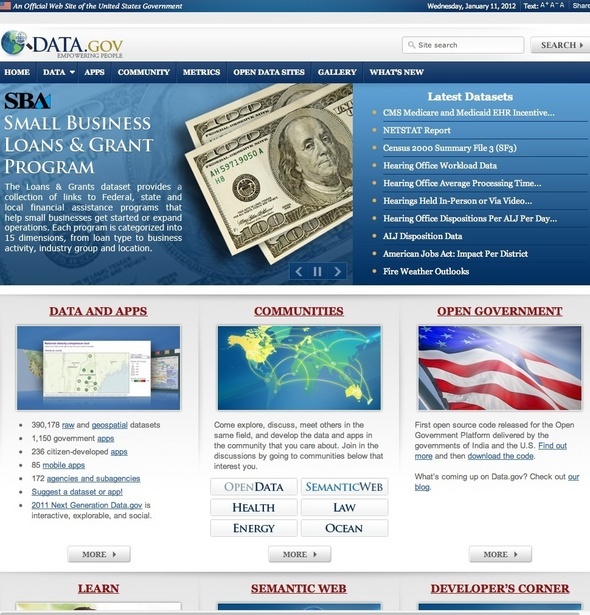 Dozens of websites have been created under the White House's Open Government Directive, announced in December 2009, with the goals of increasing transparency and fostering greater public participation and collaboration in government processes and policy.

Some sites, such as Data.gov, are far-reaching. Data.gov (pictured above) is an online repository of government data that's available to the public in a variety of formats. As of the middle of January, more than 390,000 data sets from 172 agencies and sub-agencies were available there. Among the most popular are U.S. Geological Survey statistics on earthquakes and the U.S. Agency for International Development's data on economic aid and military assistance to foreign governments.

Data.gov, more than a big database, serves as a platform for communities of interest, where researchers, application developers, and others brainstorm about public data. One recent example is the National Ocean Council's Ocean portal, with information on offshore seabirds and critical habitats for endangered species, among other data sets. There are also discussion forums and interactive maps.

Some specialty sites focus on a particular area of government activity. The Environmental Protection Agency recently released a cache of data on greenhouse gas emissions, along with an interactive map and tools for analysis.

Other sites built around narrow data sets are AirNow (focused on air quality), the Department of Energy's Green Energy site, the National Archives and Records Administration's virtual community for educators, and the National Library of Medicine's Pillbox site, for identifying tablet and capsule medications.

The White House has established a Web page where the public can track the progress of open government. A dashboard shows how agencies are faring in 10 areas, such as releasing data and publishing their plans.

InformationWeek has selected 10 federal websites that are the best examples of open government in all of its forms. (State and metropolitan open government sites aren't included in this overview.) Some put an emphasis on data transparency, while others encourage public participation or collaboration. Even so, there's room for improvement. The data on these sites isn't always timely or accurate, and public participation sometimes wanes, underscoring that open government needs constant attention to be effective.