SEARCH
A minimum of 3 characters are required to be typed in the search bar in order to perform a search.
Announcements
Report
Find out what you need to know so that you can plan your next career steps and maximize your salary.
Event
Explore strategies, new technologies, and best practices to provide a secure infrastructure - Learn more at Interop!
PreviousNext
Information Management
Commentary

Tell me, which area gets the biggest slice of the pie? Is it:

To me, the three choices look about equal based on area. Contracts-Purple, in the foreground, seems the largest by a bit. But that's the power of perspective for you -- the pie chart is oval rather than circular, and tilted in 3-D space in a way that enlarges the foreground area -- with the foreground, purple segment further enlarged by the addition of disk-edge area to it.

If you agreed with my perception, you'd be wrong. The Red, Grants segment is almost 10 percentage points larger than the seemingly bigger Purple, Contracts segment. Perhaps my foolish eye overcompensated for the tilting in 3-D space when I saw the combined Orange and Blue segments as large as the other two. In fact, together they represent about 40% of the spending that the Purple, Contracts segment represents.

(By the way, how is a negative quantity depicted in this (or any) pie chart? The Loans amount is negative but fortunately disappearingly small.)

But do you notice anything strange? At this point, I did. The wedge sizes -- the share of the pie for each segment -- simply doesn't correspond to the numbers, to the percentages. That's a serious fault so I set out to reproduce the number and the graphic. Based on the color palette, the graphic was created in Excel so I fired up a copy.

Now I'm not a big believer in 3-D charting that simply adds depths, supposedly creating visual appeal, to a 2-D chart. (Browse Stephen Few's Perceptual Edge site to learn more about the evils of 3-D charting, for instance his article The Information Cannot Speak for Itself.) I entered the IT spending figures given at USAspending.gov, verified the percentages in the government's chart, and created my own 2-D chart, this chart: 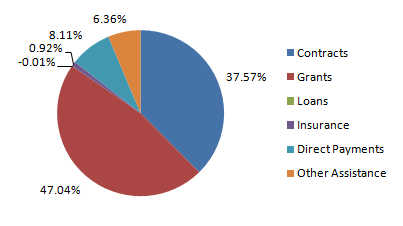 Next, I redid the chart in 3-D and carried out these transformations:

I didn't bother with shading and lighting. Here's what I got to:

Not even close. I tried one more step,

This puts the centerpoint of the wedges closer to the centerpoint of the overall graphic, sort of flattening the graphic in the picture plane and accentuating the areas that are "farther away" when you consider the use of perspective. Still no dice. Compare my recreation with the government's published graphic:

Which looks correct to you? (Mine is first, the government's is second.) My best guess is that the folks at USAspending.gov who created the chart turned it over to a graphic artist who took it on himself or herself to "improve" the graphic. That's only a guess. Maybe one of you out there can reproduce those "improvements" for us. I've put my Excel 2007 workbook on-line if you'd like to give it a shot and report back to me. Regardless, I sure hope that USAspending.gov staff will figure out and correct the problem.