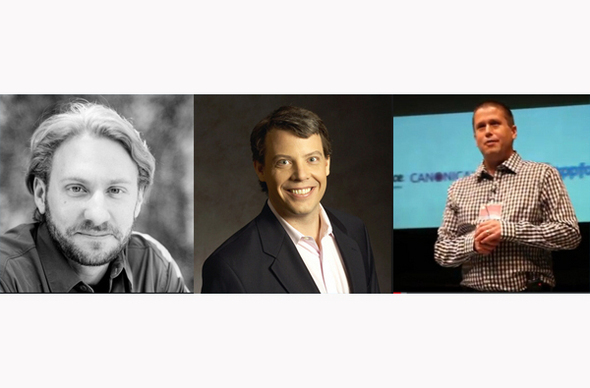 Cloud computing is barely old enough to separate out a few pioneers who have made outstanding contributions to it. InformationWeek made its first attempt to do so Nov. 26, 2012, pulling 10 names off a long list of potential cloud leaders and explaining why they made the select group. Now we're calling out another group of people whose contributions have frequently matched those of the first 10, but who have tended to labor a step back from the limelight or sometimes even in the shadows.

They include an open-source programmer, an industry consultant, entrepreneurs, authors, public speakers and software strategists. For the most part they are individuals, but we wanted to start off by looking at a team of pioneers: the Rackspace OpenStack team.

No single individual at Rackspace is responsible for the company deciding to launch the OpenStack open source project -- several individuals played important roles.

President of Rackspace Cloud Lew Moorman points out that even when Rackspace was offering hosted servers for lease, they were Linux servers tied into other open-source code in the Rackspace environment. As Rackspace Cloud was launched, it, too, was heavily tied to open source, offering virtual servers based on Xen. Noting the connection, a team of MySQL developers, members of the Drizzle Project, came to talk to Rackspace sometime after Sun acquired MySQL AB in late 2008. Drizzle was a MySQL fork and the last thing Sun was interested in was forks. Drizzle team members were wondering if Rackspace might offer steady sponsorship.

A Rackspace engineering team met with the Drizzle developers in 2009. Rackspace representatives included Jason Seats, lead engineer after coming to the company with the SliceHost acquisition in late 2008. The two teams met for a day. Adding a MySQL fork wasn't a fit with what Rackspace was trying to do, but the visitors had impressed upon Rackspace how successful open-source code could be as a method of establishing a new software standard. Jason Seats, lead engineer for Rackspace at the time, turned to Moorman and Jim Curry, director of business development at the time (now senior VP and general manager of Rackspace Private Cloud), after the Drizzle team had left and said, "We should make everything we do open source."

Rackspace wanted to differentiate itself on service for cloud users, not the software it was creating to run the cloud. Moorman and Curry agreed it was the right way to go. "Jason was the first one to state explicitly that what we were doing should be made open source," recalls Moorman, but several co-workers immediately endorsed and enlarged the idea. Curry took on the task of organizing an open-source project with an active community; Seats and Moorman went to the board of directors to say they were giving away the company's latest software "and the board bought it."

"We can make money by deploying OpenStack and helping others deploy it," Moorman said.

Although Moorman doesn't put it this way, OpenStack was also needed by Rackspace. Amazon Web Services was off to a big lead in attracting cloud users and a company like Rackspace needed to organize a larger movement to compete. The idea that OpenStack was a good idea as a standard for cloud computing and good for Rackspace to establish filtered down into the ranks of both the business and engineering sides of the company. Plans were laid to launch the open-source project. Rackspace's first contribution was its Swift cloud storage system. A few weeks before the announcement at the first OpenStack Design Summit, Rackspace learned NASA was also planning to make its Nova cloud compute software open source. The two moves were complementary and both teamed up to get the announcement of OpenStack off the ground in July 2010.

Within a few months, Seats moved on to TechStars in Boulder, Colo. But other San Antonio employees were brought into the effort. Jonathan Bryce, organizer of the original Mosso cloud at Rackspace, joined and eventually became executive director of the Rackspace Foundation. CTO John Engates became an effective OpenStack spokesman at various events.

OpenStack had a slow start as various potential backers evaluated Rackspace's central role and the possibility it might one day be a competitor. The Rackspace team realized open source thrives best when it is not the stepchild of a single company. Rackspace needed the status of having played a leadership role in organizing OpenStack, but it mainly needed OpenStack to succeed. It worked to enlarge the community and share responsibility as NASA, under server budget constraints, faded from the project. With a minimum of friction, it helped transfer governing authority from its own offices to the OpenStack Foundation with a board of contributing and elected directors.

To Curry, the latest sign of what their work accomplished was IBM's adoption of OpenStack as its standard for implementing cloud software, adding its name to an already long list of backers. "It's exactly what we wanted to happen," he said in an interview. The move will have far-reaching consequences, he predicted. OpenStack will become an industry standard, Rackspace will be the first and a leading supplier of OpenStack infrastructure as a service (IaaS), and many other providers and enterprises will follow in these footsteps.