SEARCH
A minimum of 3 characters are required to be typed in the search bar in order to perform a search.
Announcements
Alert
Got some free time? Grow your knowledge from the comfort of your computer for FREE!
Alert
Are you looking to stay on top of IT trends? Check out our FREE webinars and virtual events!
Alert
Planning for 2023? Be sure to check out our upcoming in-person events!
Report
How does your salary stack up? 2022 IT Salary Survey Results Revealed
PreviousNext
Infrastructure as a Service
4 MIN READ
News

AWS and Equinix are already cloud partners in six other locations, and Equinix officials said the close working relationship makes it likely that AWS will use the Seattle facility at some point in the future.

Amazon Web Services currently relies on Equinix facilities to power its Direct Connect service, used by financial services and other privacy-oriented organizations that wish to establish a fiber-optic communications link with an Amazon data center rather than relying on the public Internet.

The new Seattle site, however, already has one cloud service provider, Blue Box, a young supplier of infrastructure with custom, private cloud characteristics to 600 customers. Jesse Proudman, Bluebox founder and CEO, said in an interview that his firm likes the SE3 facility "because of the growth possibilities. If you go with a regional provider and outgrow their facilities, where do you go next?" Equinix has also "always been a hub of network connectivity," and Blue Box likes connectivity that can reach its California customers as well as those in the Seattle area. It also has plans to expand in Asia. Soon Blue Box will offer its cloud services from Zurich, again from an Equinix facility there.

The Equinix expansion also puts Seattle on the map as an e-commerce and Web content gateway, not only to the West Coast of the U.S., but also to Asia. Equinix has a reputation for building its facilities at the most densely trafficked trading and communications hubs; 60 network suppliers are available through its downtown Seattle facilities. Unlike Facebook's sprawling new data center complex in central Oregon, Equinix's new center is built up -- eight stories high.

Equinix already had a presence in Seattle's 34-story Westin Building, a shared telecommunications and co-location center. The new SE3 data center is next door, currently housing its first 500 racks of servers and switching equipment. At 59,000 square feet, it will eventually be a 1,000-rack facility. "It's the most densely equipped, highly interconnected facility in the area," said Equinix's Charles Meyer, president, the Americas.

RightScale is a management company that transfers customer workloads between clouds, a service that requires well-connected locations. Online game company Zynga also builds its Z-cloud data centers near Facebook and Equinix data centers so its users can take advantage of the low latency and short hops between Facebook applications and Zynga games. Equinix's Seattle facility shows how regional concentrations of data centers appear to be an emerging trend as very large Internet companies extend their reach. 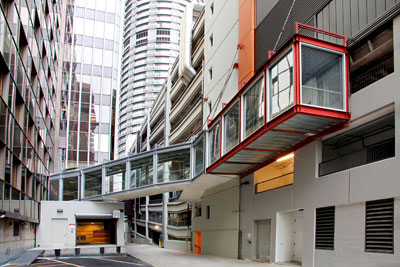 Northern Virginia is also home to a variety of data centers, including Amazon's most heavily trafficked one, U.S. East, in Ashburn, Va. Equinix has one its IBX (international business exchange) facilities in Ashburn, and Verizon Terremark's secure government processing facility is also located there. Apple, Google and Facebook are building data centers in the foothills of Maiden, Lenoir and Forest City, North Carolina, respectively, within an hour of each other. Apple is also building one next to Facebook's new Prineville, Oregon site. Equinix tries to combine communications links with co-location space and processing power. In several of its locations, it links a downtown communications hub with another nearby suburban data center – for example, in the New York area, Equinix operates a Manhattan facility and another major data center in nearby Secaucus, N.J. In Chicago, it has both a downtown facility and one in Oakbrook, Ill.

The Seattle facility fits this same profile. Meyers said Equinix supplements its SE3 and Westin Building facilities with a data center located 12 miles south, in Tukwila, Wash. Together, the three data centers offer customers a backup site that's often separate from their primary site on the power grid. In many of its downtown sites, Equinix must use buildings that were constructed long before the advent of the Internet. "It's very challenging to work in a legacy building [such as the Westin Building]," Meyers noted, adding that suburban centers allow more communications and power hookups as well as more space.

During Hurricane Sandy, occupants of a legacy building at 75 Broad, a communications hub in Manhattan, found their disaster plans overturned when 4 feet of water washed into the lobby, filling the basement and disabling the fuel distribution system located there. Peer 1 crews in the building ended up carrying diesel fuel in a bucket brigade to the backup generators on the 18th floor.

Meyers thinks Equinix's combination of urban and suburban data centers will save the company from needing such post-disaster relief efforts. And Equinix is positioning itself for a future that includes heavy use of cloud computing. "We see good demand in the pipeline," Meyers said.

Attend Interop Las Vegas May 6-10 and learn the emerging trends in information risk management and security. Use Priority Code MPIWK by March 22 to save an additional $200 off the early bird discount on All Access and Conference Passes. Join us in Las Vegas for access to 125+ workshops and conference classes, 300+ exhibiting companies, and the latest technology. Register today!