SEARCH
A minimum of 3 characters are required to be typed in the search bar in order to perform a search.
Announcements
Event
Discover the latest in hybrid work trends, including new technologies - Learn more at Interop.com!
Event
SupportWorld Live: May 15-20, 2022 | MGM Grand, Las Vegas, NV
PreviousNext
Infrastructure as a Service
5 min read
article

Satya Nadella, in his first public appearance since taking over for Microsoft's Bob Muglia, said that the cloud age equals a sales opportunity for Microsoft, not a threat.
Charles Babcock
Editor at Large, Cloud
June 23, 2011 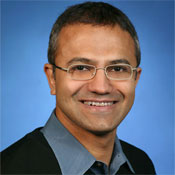 Satya Nadella
Satya Nadella, in his first public appearance since replacing Bob Muglia as Microsoft's president of its server and tools business, said cloud computing is a natural extension of Microsoft's "high volume, low price business model" and Microsoft will thrive in the cloud era.

Looking a youthful 43, lanky, and eager to speak out, the bespectacled Nadella put in a 15-minute appearance at the Structure 2011 conference in San Francisco, a show sponsored by the GigaOm news and analytics group. Nadella took over the server and tools business in February after CEO Steve Ballmer ordered a change at the top.

He took office in the midst of "a sea change, a foundational change" from the client/server era in which Microsoft had risen to desktop dominance, but the emerging cloud age with its de-emphasis of the Windows desktop is not necessarily hostile to Microsoft's future, Nadella said. "There's nothing in there that's a threat," he said.

The cloud is encouraging more computing on many fronts, including in non-Windows mobile devices. But many of the virtual servers booted up in Amazon's EC2 are benefiting Microsoft. "Amazon has done a fantastic job. Amazon represents a good chunk of our Windows business," he noted.

Some developers who work in Microsoft's Azure cloud also make use of Amazon's EC2, and Nadella said Microsoft "will support customers using multiple clouds. We'll have to partner and provision for that."

Asked by Eric Savitz, San Francisco bureau chief for Forbes, whether all the smartphone apps and workloads running in the cloud didn't represent reduced prospects for Microsoft applications, Nadella refused to be put off his positive message. Cloud computing is part of a general increased appetite among its customers for more computing, he said. "We see a lot of new business getting created, like Ticket Direct," a Ticketmaster-like service in New Zealand and Australia. The online service at www.ticketdirect.com.au uses Azure to expand its capacity as tickets go on sale for a popular concert, allowing customer service to expand as demand peaks, then "dehydrate" as it falls away.

Microsoft is getting its share of software-as-a-service customers through its Business Productivity Online Suite, including Microsoft Exchange Online and SharePoint Online, and its Office 365. Half of the Fortune 500 businesses that have tried Microsoft SaaS offerings have signed up for regular service, he said. "Tens of thousands of customers are playing with Azure," he added.

As long as cloud suppliers and cloud users are spinning up Windows when they're ready to compute, "we will be competitive," said Nadella. He appeared to tacitly concede that Amazon.com and other vendors had been the pioneers of the cloud, not Microsoft, but early in his talk, he said "we're very early in this process" and for years to come the cloud will fit into Microsoft's business model.

Customers were still concerned about security. They might "be very happy to put their stateless website in the cloud, but are they moving their core billing system, taking that into the public cloud? Probably not."

For that matter, use of online apps wasn't seriously damaging Microsoft's ability to sell desktop applications, he said. "If you want a pure model, you can use Office 365. Office Web applications are very good. We're experimenting with HTML 5," he noted. "But they're not as good as client Office. People want Office apps" loaded on their desktop, he noted.

What he didn't say about the state of the cloud was whether AWS and its customers have thoroughly recovered from the three-day outage of its short-term storage and database cloud services in its eastern U.S. data center in Virginia in April. He might have been obliquely referring to the setback at the end of his talk, when he praised innovators on EC2's infrastructure as a service, such as Advanced Innovations. The firm builds global supply chains with highly reliable business processes built on a multi-region cloud architecture, not a single data center, Vogels said.

A data center on the East Coast "could disappear off the face of the earth," he suggested, and its work would be picked up by one in Europe or one on the West Coast. AWS operates data centers in Europe and in Northern California, as well as Northern Virginia, so it, too, could host highly reliable services built by the firm. Amazon previously said customers could have full recovery features by mirroring their cloud workloads in a second availability zone running in the same data center. The Easter weekend incident, however, cut across availability zones in the Virginia facility.

Security concerns give many companies pause as they consider migrating portions of their IT operations to cloud-based services. But you can stay safe in the cloud, as this Tech Center report explains. Download it now. (Free registration required.)