Microsoft Office 2013: 10 Best Features
(click image for larger view and for slideshow)
Microsoft has unveiled a major revamp of SkyDrive, and said the cloud storage service has moved beyond the "preview" stage to become fully operational.

The enhancements include a new Web front, faster uploading and sorting, new tools for developers, and a forthcoming SkyDrive app for mobile devices that run Google Android.

The most apparent change to the service is a new home page, SkyDrive.com. The page organizes users' documents into folders and files and presents them on tiles similar to those used by Windows 8 and Windows Phone.

It's not all cosmetic though. The home page also offers a tool that allows users to instantly search the contents of their SkyDrive account, including searching for information within Office documents.

"We've updated nearly 100% of the SkyDrive UI to provide a fast and fluid Web experience on all browsers and devices," said SkyDrive group program managers Omar Shahine and Mike Torres, in a blog post Tuesday.

The SkyDrive client for Windows and Mac OS X also gets some updates. Photo uploads are now up to 1.7 times faster, according to Microsoft. And syncing of files between the desktop and SkyDrive cloud is also much quicker and less resource intensive.

"We focused on minimizing CPU time while looking for changes, which has significantly reduced the total work that we do on every scan--meaning a much faster sync experience and more time for your CPU to tackle its other tasks," said Shahine and Torres. According to Microsoft's tests, syncing between the desktop and the cloud is 300% faster on the new, non-preview version of SkyDrive.

Developers who want to integrate a SkyDrive storage option directly into their apps will also see some benefits from the revamped service. 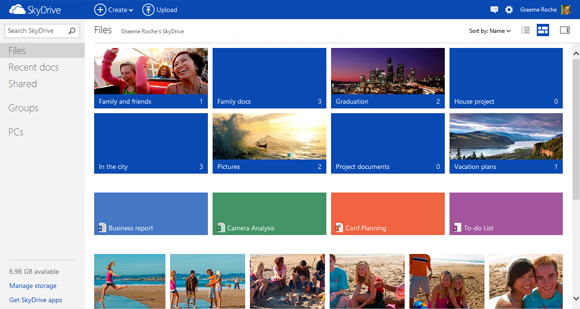 Restrictions such as resolution limits on photos to be uploaded have been lifted, and the SkyDrive API now includes a file picker that adds SkyDrive functionality to any website with just a few lines of JavaScript.

Finally, Android users will be able to get their hands on a SkyDrive app in the coming weeks, though Microsoft would not be more specific on an arrival date. It will be similar to the SkyDrive apps already available for Windows Phone and the iPhone, according to the company.

"While there's always more to do to improve our products, these updates bring SkyDrive out of preview and ready for a billion users," said Microsoft Windows business group VP Chris Jones, in the blog post.