It's always been difficult to compare cloud pricing. The picture has gotten more complex since the cloud's inception because of a proliferation of instance types in each of the Big Three cloud vendors offerings. In addition, each offers its own approach to discounting.

The main reason it's been difficult to compare pricing is because the basic units of measure are different – one virtual server is different from another's, as InformationWeek explained in this story in 2012.

A third party who is in position to compare cloud prices has attempted to do so and publish its findings. RightScale serves as a front-end management platform for Amazon Web Services, Google Cloud Platform and Microsoft Azure. Many of its customers turn to RightScale to connect their workloads to more than one cloud. As a result, it's had the opportunity to examine the choices in depth. In a blog posted Nov. 28, it summarized some of its long term findings, supported by a set of slides viewable on SlideShare.

[How one company measured the cost of the cloud. Read First American Cloud Analysis Point To Savings.]

The main route to getting a good price in the cloud consists of mastering the details of each suppliers approach to discounting, and understanding which one best applies to the particular task at hand. Amazon Web Services' discount through use of Reserved Instances is well known. The price per hour goes down, the longer the RI commitment, either one or three years, combined with the amount the user is willing to pay upfront.

A typical RI discount reduces the price per hour from 24% up to 76%, depending on the instance type, whether it's a one or three-year deal and the region in which the RI commitment is made. The size of the discount also depends on whether the customer is willing to pay some of the commitment upfront. 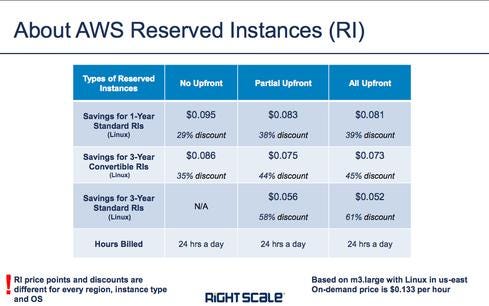 But Reserved Instances lock you into a particular virtual server type as well as a time commitment. Did you know AWS now offers convertible RIs, which can start out as one instance type and convert to another before the term of use is up. That's something many seekers of the Reserved Instance savings would like to do, but RightScale warns that convertibles come at a steep price. Instead of getting the steep 3-year discount with a convertible RI, a customer gets 5-6% off the standard 1-year RI price but the term of use is still for a full three-years. Most AWS customers would find their computing needs change over that time period. A conservative estimate of those servers deemed to be sure to be running three-years hence is the right group with which to pursue the steepest RI discount, and the best discount avoided in other cases, the RightScale blog said.

"Your usage may change drastically over 3 years... We recommend caution in purchasing three-year RIs," the RightScale blog said.

One example, 3 years vs 1 year

If a typical one-year RI discount for a certain instance were 24%, then the convertible, three-year RI instance would amount to another 5-6% off or 29-30% for a three year contract. Instead of that option, consider "as a starting point" a one-year reserved instance, with no down payment up front. RightScale used that option for purposes of comparison with other cloud discounts.

Getting the compute instance priced right is important because it represents 75-80% of what enterprises spend in the cloud, regardless of which vendor they choose, as RightScale cited in a previous study discussed here.

The Google and Microsoft stories

Microsoft Azure offers enterprise discounts from 15-45%, based on customer's level of usage and length of commitment. RightScale selected 30% as the midpoint and used it in comparisons.

Unlike AWS and Google, Microsoft always includes solid state disk with its instances, while at AWS it's ordered by the customer for a fee. SSDs are not included by customer choice or otherwise in the Google cloud; they're simply not available. Keep that in mind when looking at Microsoft pricing, particularly if the SSD adds value to your virtual machine.

Google Cloud offers Sustained Usage Discount or SUD, which requires no upfront commitment. In the Amazon examples, the instances were presumed to be running 24 hours a day. Google will implement a discount automatically once an instance has run for 25% of the month, the price goes down to 80% of the regular on-demand price. The 20% discount is doubled to 40% when the instance has been running 50% of the month. For an instance that runs continuously, the discount will amount to 30% of the initial on-demand price, without the customer needing to make a series of instance type decisions and place an order, as with AWS.

The closest RightScale could come to comparing comparable cloud resources was to look at the cost for one year for a general purpose virtual server on each supplier. For AWS it was the m3.large Reserved Instance; on Microsoft Azure, it was a D2v2 instance; on Google Compute Engine, an n1-standard-2 instance, with discounts applied in each case.

RightScale went on to do additional comparisons with results that sometimes favored AWS or Google, depending on the configuration.

When SSDs had no value to the workload, then the comparison tended to favor Google; indeed it was the lowest price for five the scenarios that the RightScale authors conceived. But it was also the highest price for seven of them. When an SSD was needed, then customers had to add on a 375 GB SSD and pay the accompanying fee. When no discounts were applied, however, Google often came out as the lowest priced supplier, an approach that might reflect its focus on and popularity with young companies and startups less likely to plotting three-year contracts. Also, don't forget Google charges by the minute and doesn't round up to the next hour after 15 minutes of use, the way Amazon does.

Azure was the lowest price for seven scenarios, the highest price for two. Azure tended to match or be lower than AWS, except in one of the workload example constructed by the authors.

Amazon was the lowest price for one workload example, the highest for four, and most frequently was somewhere in between Azure and Google.

To inspect the specifics of each comparison, visit the RightScale blog. It was authored by Brian Adler, director of enterprise architecture at RightScale, and Kim Weins, VP of marketing. There's also this cloud comparison tool available on the RightScale site.