What new Mac and iPad technologies might Apple have in the pipeline? Take a peek, innovation critics. 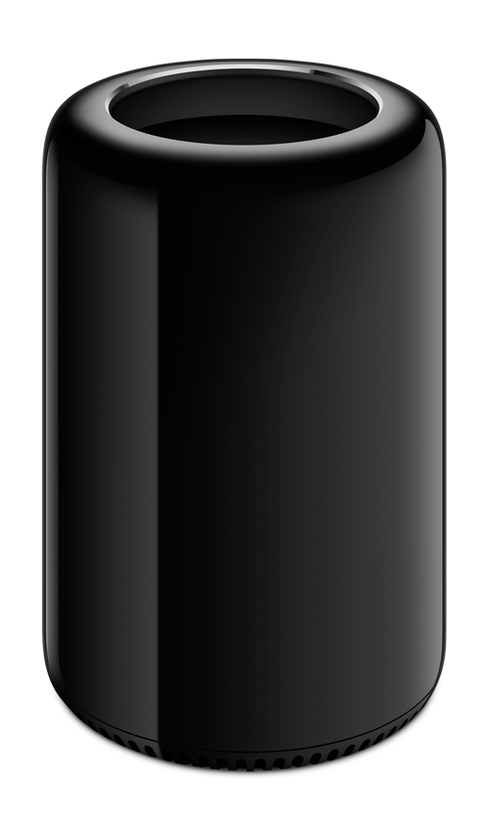 Apple is back in the headlines this week, due not only to the company's mixed earnings report, announced Monday, but also the public release of two new patents: a stylus that can produce both fine-point and thick strokes on a touchscreen, depending how the user orients the pen; and a solar-powered laptop whose rear panel includes touch controls and even a second screen.

Apple hasn't indicated whether it will ever release products based on these patents. Like most companies of its scale, Apple has registered countless inventions that haven't been integrated into any products and which might never be.

Indeed, Apple executives frequently dismiss concepts covered in many of the company's patents. CEO Tim Cook and other Apple leaders have shown only disdain for touchscreen PCs and laptop-tablet hybrids, for example, even though patents indicate the company has repeatedly investigated the idea.

But Apple execs' distaste for certain ideas isn't always as firm as it appears. Before the iPad Mini became a hit, Steve Jobs famously belittled smaller tablets. Jobs also rejected stylus accessories and other concepts Apple has continued to explore since its founder passed away.

Granted, these patents might exist as much to block competitors' moves as to advance future Apple products. But with the PC market still fragile and the tablet market rapidly maturing, Apple, which has spent the last year iteratively improving products rather than aiming for game changers, might use 2014 to launch more attention-grabbing technologies.

What concepts has Apple been exploring? Here are five of Apple's recent eye-opening patents.

1. A stylus that makes writing on iPads like writing on paper
In a patent released this week called "stylus orientation detection," Apple describes technology to make a stylus and touchscreen function more like a pencil and piece of paper. If a user were to apply the pointed tip of the pen to a touchscreen, for instance, the stylus would produce a fine line, but if the user were to apply the broad side of the tip, the stylus would produce thicker strokes. Apple also holds earlier patents related to stylus input, including inventions registered in 2010 that describe how an electronic pen might vibrate to provide haptic feedback as the user writes and which could even include speakers to mimic the sound of a pencil on paper. 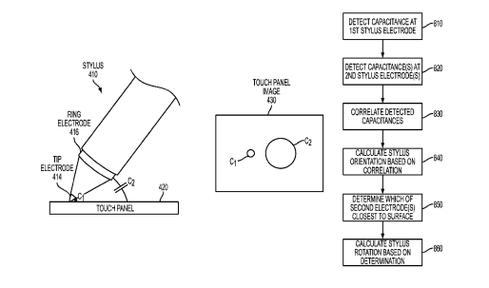 2. A solar-power MacBook with touch controls on the rear panel
Originally filed in 2012, this newly public Apple patent allows the backside of a MacBook's display enclosure to double as a touch-sensitive, solar-powered surface that could house a variety of controls or even a second screen. The patent describes technologies to hide these rear controls when not in use. The touch controls can also support a variety of input methods, including capacitive, acoustic, optical, or pressure-sensitive stimuli.

3. Solar-powered iPad keyboards and 2-in-1 MacBook-iPad hybrids
Supply chain rumors indicate Apple could soon release a larger, productivity-oriented "iPad Pro" to complement the recent iPad Air. If such a device comes to market, a 2011 Apple patent that describes an iPad keyboard accessory is sure to generate attention. The patent describes a flexible Smart Cover that doubles as a keyboard, broadly like Microsoft's Type Cover for its Surface line. But just as Microsoft is experimenting with music-mixing Surface covers in addition to keyboards, Apple's patent describes a Smart Cover used for more than typing. The invention includes the potential integration of AMOLED displays to extend the iPad's viewing surface onto the cover, as well as electronic paper displays that would allow at-a-glance information, such as social media updates or calendar appointments, to be displayed when the Smart Cover is folded to prop up the device. 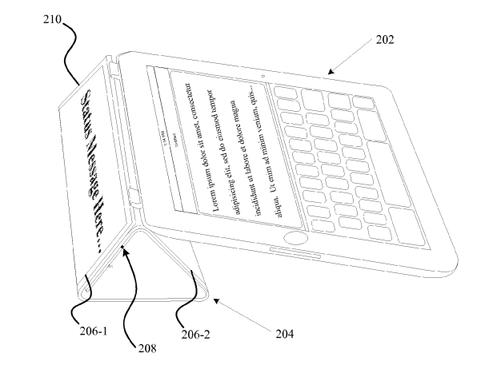 Tapping into a related vein, a former Apple employee named Jamie Ryan made news last year when he blogged that Apple was investigating iPad keyboards. Apple also holds patents for sturdier keyboard accessories, such as a base station into which an iPad could be docked.

4. Touchscreen MacBooks and iMacs
Apple execs have claimed touchscreens don't work on PCs and laptops because users prefer to apply touch input on horizontal surfaces. That's why Apple focuses on multi-gesture support in Mac Trackpads, rather than touch-enabled displays.

Nevertheless, Apple has registered a number of patents related to touchscreen PCs, including one for an iMac with an adjustable stand that would, like the Lenovo Horizon 2 and other plus-sized Windows 8.1 tablets, allow the monitor to be used both upright and flat.

Vaguely like the Air Gesture feature in Samsung's Galaxy S4 (but implemented through different methods), Apple's invention detects not only 2D objects on the display, but also, via embedded proximity and capacitive touch sensors, user gestures made just above the screen's surface. These gestures could enable users to manipulate CAD projects by grasping the space above an iPad's screen, or to shape 3D models, among other things. Filed in 2012, the patent was made public in August of last year.

@Michael: And Apple and Microsoft both ripped off Xerox!  ;)
Reply  |  Post Message  |  Messages List  |  Start a Board

@Kristin: This was always a problem for me with those old calculators when I was younger; they purported to be solar-powered, but you couldn't see the darn things in the sunlight.

Still, technology exists now to mitigate that.  The new Kindle Paperwhite boasts that it is far more readable in sunlight than the basic iPad.
Reply  |  Post Message  |  Messages List  |  Start a Board

The Apple patent I'm most excited about -- above all of these others -- is the one described here.  Put into action, this technology and process would allow for iPhone customers to carrier-shop directly from their iPhones, comparing rates, contracts, and deals/packages all at once in one easy interface -- seizing power away from carriers and putting it in the hands of Apple (indeed, the customer would be billed through Apple's iTunes store instead of via the carrier directly).

Not only would that be great for consumers, but it would be bound to be a huge moneymaker for Apple if made a reality.
Reply  |  Post Message  |  Messages List  |  Start a Board

Solar-powered devices are interesting but glare is a big problem. I suppose you could charge it via sunlight, you just cant use it in sunlight.
Reply  |  Post Message  |  Messages List  |  Start a Board

While I'd definitely like to see what an Apple TV set would look like, I'm not convinced such a product is coming. To preserve the margins to which it's accustomed, Apple would need to introduce a pretty magical device. I think that the next Apple TV could be pretty cool, however. As television and the Internet collapse on one another, I'm not convinced that the hardware itself will matter much (beyond certain base specs) for Apple's goals. Apple TV could become sort of like an operating system that takes over your TV set's native OS. You could buy any of a range of sets from a range of manufacturers, but content  delivery, navigation and perhaps even storage will run through Apple's UI and ecosystem. Microsoft and others are doing many of the same things. So perhaps as Apple TV evolves, Apple (and its customers) can get the benefits of an Apple television without the TV itself.
Reply  |  Post Message  |  Messages List  |  Start a Board

I can appreciate why some of these patents might not feel like fresh ideas. But as you alluded, they're noteworthy because they're from Apple. If there's one thing the company has done remarkably well, it's this: find the right moment and manner to bring previously-expressed ideas to market.

Some people like to argue that Apple gets too much praise for the iPad, for example, and that Microsoft actually invented tablet computers. There's a nugget of validity in this kind of argument, but it's also pretty myopic. If what Apple accomplished were so easy to dismiss, why hasn't someone else managed comparable success? Apple might not have produced the first tablet prototype, but it built the first one that people actually wanted to use. Based on this kind of batting average, there's a natural curiosity when Apple focuses attention around a specific technology. Without Steve Jobs, Apple still has to prove that its intuition for market shifts is intact, but when the company decides to take a stab where others have dabbled and failed, I pay attention.

Among these patents, I like the idea of a Smart Cover that extends the iPad's display. Pretty cool-- and I like that both Apple and Microsoft are thinking of tablet covers that do more than typing. Tablets welcome certain use cases, and we should be seeing more first-party accessories that push the envelope a bit.
Reply  |  Post Message  |  Messages List  |  Start a Board

I will respectfully disagree. It will be harder for Apple to convince people to dump their flat screen TVs than it was to convince them to dump Windows notebooks and BlackBerry devices. I am watching what happens to existing Apple TV device.
Reply  |  Post Message  |  Messages List  |  Start a Board

How intrigued are you by the solar power patents, readers? My Twitter feed is buzzing on this one.
Reply  |  Post Message  |  Messages List  |  Start a Board
InformationWeek Is Getting an Upgrade!