LG, which makes displays for Apple, may have revealed what that next iMac looks like, including its 8K display. However, some are skeptical.

An Apple iMac desktop with twice the resolution of a 4K screen could be in the works, according to an LG press release issued March 31 saying the company was in alignment with the consumer electronics giant to produce 8K display for its upcoming iMac desktop computers

LG, which makes displays for Apple computers, may have jumped the gun on Apple’s announcement, though skeptical tech enthusiasts have been wondering whether the statement was part of a collection of April Fools' stunts.

"It has become clear that Japan is planning to launch an 8K SHV test broadcast and then promptly restructure the UHD service," the LG release said, according to Cupertino Times. "Apple has also announced that they will release the 'iMac 8K' with a super-high resolution display later this year. Korea is also preparing to offer an 8K service demonstration at the 2018 Pyeongchang Winter Olympics. LG Display displayed a new beacon of the 8K era by revealing their 98-inch 8K Color Prime Ultra HDTV at CES 2015."

However, a quick scan of the LG site finds that the release, even if true, is no longer there.

Adding to the doubt is the fact that Apple just released an iMac with a 5K display late last year, which features 14.7 million pixels and retails for a whopping $2,499.

Given the already impressive pixel density contained in a 27-inch 5K display -- 1080p fits inside of it seven times -- an 8K display or "Quad Ultra-High Definition" as LG describes it, would boast a resolution of 7,680 by 4,320 pixels, twice the number of pixels as a 4K display. 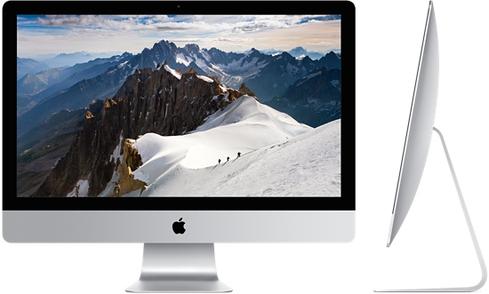 As unlikely as the proposal may seem, LG would be in a position to know -- the company unveiled an 8K display on a 98-inch screen at the Consumer Electronics Show in January, and LG currently manufacturers the iMac's 5K display.

While the pixel density and resolution capabilities are no doubt impressive, it's worth noting that 4K resolution content is still hard to come by. The prospect of 8K displays, while alluring, might have limited value until media quality catches up.

In other Apple news, TechCrunch reported the company quietly purchased Ottocat, a startup that specializes in search technology, in 2013.

Ottocat's search software is supposedly behind the "Explore" application-- which was announced as an App Store addition last year.

Ever since the announcement of the Apple Watch in March, the Apple rumor mill has started the churn about that the company has up its sleeve next. Much of the speculation is focused on the upcoming Worldwide Developers Conference, which kicks off June 8. A lot of talk has involved a revamped Apple TV product that is slated to debut at the show, along with other updates, including a new version of iOS.

In addition, many are already looking ahead to the next version of the iPhone, which some are calling the "iPhone 7," although Apple's naming scheme indicates the company will continue to use some variation of iPhone 6.

Nathan Eddy is a freelance writer for InformationWeek. He has written for Popular Mechanics, Sales & Marketing Management Magazine, FierceMarkets, and CRN, among others. In 2012 he made his first documentary film, The Absent Column. He currently lives in Berlin. View Full Bio
We welcome your comments on this topic on our social media channels, or [contact us directly] with questions about the site.
Comment  |
Email This  |
Print  |
RSS
More Insights
Webcasts
Protecting Your Enterprise's Intellectual Property
Making Cybersecurity Work in Small and Medium-Sized Businesses
More Webcasts
White Papers
Passwordless: The Future of Authentication
Presenting Your Cloud Security Strategy to the Board
More White Papers
Reports
Assessing Cybersecurity Risk in Todays Enterprises
Evolution of Ransomware Gangs
More Reports

Actually, it would be 4 times as many pixels, since the resolution is doubled horizontally and doubled vertically.
Reply  |  Post Message  |  Messages List  |  Start a Board

With 8K, I'll be the user will feel like he/she is actually there. Even on the smallest screen I bet it's got the wow factor.
Reply  |  Post Message  |  Messages List  |  Start a Board

There's a point of diminishing returns in resolution improvements.

Isn't value-add always an option, though? Are you suggesting they should use something else for value add?
Reply  |  Post Message  |  Messages List  |  Start a Board

I agree, simply building these high specs because it is doable, without many applications calling for working in high resolutions, not to mention the type of storage requirements that would be required to house these potentially gigantic files doesn't make too much sense.  That being said, if we see future standards being based in needing 8K resolution, then sure, why not.  But to build it with higher costs just to say it does 8K isn't really going to drive huge sales I don't think.
Reply  |  Post Message  |  Messages List  |  Start a Board

There's a point of diminishing returns in resolution improvements. I suspect most people's eyesight is not good enough to appreciate the difference between 4K and 8K content. And in any event, adding to resolution makes content steaming too expensive. We just don't have the bandwidth to support that kind of resolution inflation.
Reply  |  Post Message  |  Messages List  |  Start a Board
Editors' Choice
Hot Topics