The Chromebit, created by Asus and Google, is the latest in a series of PC-on-a-stick devices that boast low prices and compact form-factors. This version will retail for $85.

Google and Asus announced way back in March that the two companies were planning the release of a computer-on-a-stick running Google's Chrome operating system. Now, eight months later, the Chromebit is finally hitting the market.

The $85 device, which is about the size of a pocket lighter, is powered by a quad-core ARM Cortex-A17 chip, which is based on the Rockchip 3288 system on a chip (SoC) design, and offers 2GB of RAM and 16GB of internal storage.

The idea behind Chromebit and other similar devices is to plug the stick into a standard television and turn it into an instant computer.

Users can do the same with a standard computer monitor, provided it has an HDMI port. Users will also need to provide their own keyboard. 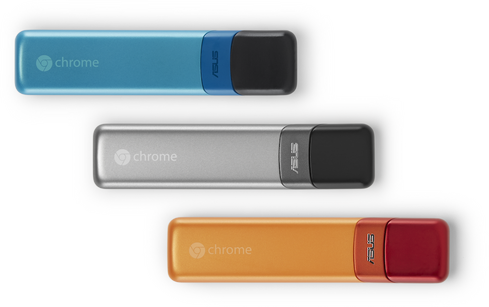 While the Chromebit isn't intended to serve as a replacement for a full-blown work PC, there are a number of potential business uses for the device, especially among small businesses, where cost is a key concern.

For instance, aging conference room PCs could be replaced with the Chromebit, which could very likely perform all the necessary duties businesses need from a conference room PC at a substantially reduced price, with a form-factor that makes it virtually invisible.

The Chromebit could also serve as an effective travel PC, thanks again to its small size and low cost.

These two attributes make it less nerve-wracking to travel with than a brand-new notebook, and because virtually all Chromebit content is stored and accessed in the cloud, it is less susceptible to malware than a traditional PC operating system.

The Chromebit is not the only PC-on-a-stick competing for marketplace attention. Asus itself is planning the launch of the VivoStick PC TS10, a similar, though slightly larger device.

The VivoStick will run Windows 10 Home, boast Intel HD graphics, 32GB of storage, and 100GB of free additional cloud space on the company's Web storage platform for the first year of use.

The 5.4-inch long device will also offer support for 802.11 b/g/n wireless networks, come equipped with Bluetooth 4.0 connectivity, and include two USB 2.0 ports and an audio jack for headphones or microphone control.

In June, Lenovo rolled out its first compute stick, the Ideacentre Stick 300, which is priced at $129. It transforms almost any HDMI-compatible TV or monitor into a Windows-based PC.

While all the devices mentioned can be picked up by American consumers, they might not be the target market.

Vineet Durani, Microsoft India's director for Windows Business Group, said in a June interview with The Economic Times of India that a stick might help improve penetration into emerging markets, where just 10% of households in the country currently have access to computers.

"We can position this stick PC as a cheap alternative to PC. In those areas, chances are that people might not have a PC but they certainly have a TV in their house," Durani told the paper.