The German automaker plans to offer energy storage units based on Mercedes technology to homes and businesses.

Daimler AG is pursuing Tesla into the home battery market. The company has begun offering energy storage units based on battery technology from its Mercedes-Benz subsidiary to residential and business customers in Germany.

Widespread adoption of batteries in homes and businesses has the potential to transform the utility industry because the ability to store energy -- solar or from other sources -- reduces the need to generate power on-demand, in real-time. Batteries in homes and businesses make electric vehicles easier to maintain and enhance the viability of distributed solar power generation.

Daimler's batteries, offered though its Deutsche Accumotive subsidiary, have a 2.5 kWh capacity and up to eight can be linked to create a 20 kWh unit. Industrial modules offer 5.9 kWh. The company is working with German utility Energie Baden-Wuerttemberg AG to bring the technology to market.

Daimler is demonstrating its battery technology at the Intersolar trade show in Munich, Germany, June 10-12. The company described its batteries as being both for industrial and private applications, specifically as a backup power supply and as a way to store renewable energy. 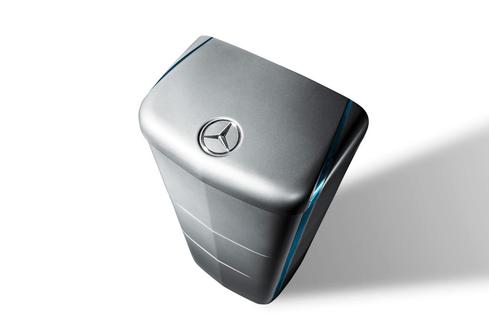 "With our comprehensive battery expertise at Deutsche ACCUmotive we are accelerating the transition to sustainable energy generation both on the road and in the field of power supply for companies and private households," said Harald Kröger, head of electronic development for Mercedes-Benz, in a statement. "The technology that has proven its worth over millions of kilometers covered in the most adverse conditions, such as extreme heat and cold, also offers the best credentials for stationary use."

Daimler said it expects battery deliveries to begin in September.

In February, Tesla Motors said it will offer batteries for residential and industrial energy storage and backup later this year. In May, CEO Elon Musk said his company had received 38,000 pre-orders for its Powerwall home battery, an expression of consumer interest that should translate into hundreds of millions in revenue.

Tesla plans to invest around $2 billion in to built its battery Gigafactory outside Reno, Nev.

Thomas Claburn has been writing about business and technology since 1996, for publications such as New Architect, PC Computing, InformationWeek, Salon, Wired, and Ziff Davis Smart Business. Before that, he worked in film and television, having earned a not particularly useful ... View Full Bio
We welcome your comments on this topic on our social media channels, or [contact us directly] with questions about the site.
Comment  |
Email This  |
Print  |
RSS
More Insights
Webcasts
Protecting Your Enterprise's Intellectual Property
Strategies for Success with Digital Transformation
More Webcasts
White Papers
A Technical Deep Dive on Software Exploits
Five Reasons to Protect your VPN with Multi-Factor Authentication
More White Papers
Reports
2021 Top Enterprise IT Trends
Special Report: Understanding Your Cyber Attackers
More Reports

I really like the current push for end user and enterprise produced and stored green energy. So many people seem to be pushing to generate their own power these days and move away from traditional grid dependance. It certainly seems like a more viable solution than expecting governments to tackle the growing climate change issues, many of whom continue to ignore the obvious.
Reply  |  Post Message  |  Messages List  |  Start a Board
Editors' Choice
Hot Topics