Gartner finds server shipments fell in the first quarter, but conditions are leveling off and Chinese vendors are on the rise.

The patient is still in intensive care, but his condition isn't as bad as it was until recently. That's the glass-half-full assessment Gartner used to sum up its worldwide server shipment and revenue report for the first quarter of 2014.

"After some challenges in 2013, vendors will be relieved to see 2014 get off to a relatively good start," said Adrian O'Connell, research director at Gartner, in a statement. "The demand environment is stabilizing but challenges remain. We are likely to see revenue growth in 2014, but the reality is that the market is operating from a significantly lower level than it was prior to the downturn in 2008."

The "challenges" that remain include continued declines in sales of non-x86 servers. RISC/Itanium Unix server shipments were down 19.9% while vendor revenues in this category fell 16.9% from Q1 2013. This continues a trend whereby defections to x86 servers have hit RISC/Itanium Unix server lines including HP Itanium, IBM Power, and Oracle Sparc. But here, too, Gartner says there's reason for hope.

"Platform migrations continued to be a factor, but the rate of these declines has slowed and the worst rates of decline may be behind us," said O'Connell.

IBM troubles have been compounded by a precipitous decline in hardware sales in China, where the company is widely seen as the victim of a growing dispute between the US and China. BusinessWeek reported Tuesday that the Chinese government is reviewing whether domestic bank reliance on high-end servers from IBM compromises the nation's financial security. The move comes in the wake of last year's revelations by former contractor Edward Snowden of large-scale National Security Agency spying programs.

Tech industry watchers say the spying revelations have crimped US vendor sales worldwide, but the new Chinese government review comes one week after American prosecutors indicted five Chinese military officers for allegedly hacking into the computers of US companies. Chinese agencies, including the People's Bank of China and the Ministry of Finance, are asking banks to remove the IBM servers and replace them with a local brand as part of a trial program, according to BusinessWeek. 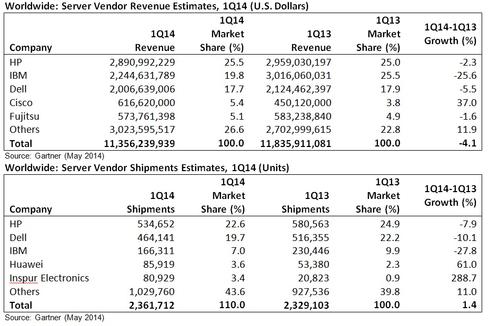 "Local" server brands in China include x86 server makers Huawei and Inspur Electronics, which were the only vendors among the top five in Gartner's report to show increased shipments in the first quarter of 2014, with growth of 61% and 288.7%, respectively. This is the first time Inspur made it into the top five in server shipments.

HP remains the worldwide server market leader, with $2.9 billion in revenue in the first quarter, but its market share was down 2.3% from the same quarter in 2013, to 25.5%.

Doug Henschen is Executive Editor of InformationWeek, where he covers the intersection of enterprise applications with information management, business intelligence, big data and analytics. He previously served as editor in chief of Intelligent Enterprise, editor in chief of ... View Full Bio
We welcome your comments on this topic on our social media channels, or [contact us directly] with questions about the site.
Comment  |
Email This  |
Print  |
RSS
More Insights
Webcasts
Making XDR Work in Your Enterprise - May 12
Multi-Cloud Data Management for Modern Applications
More Webcasts
White Papers
Improve your business with a Virtual CISO
Cisco Secure Email
More White Papers
Reports
2021 Application Security Statistics Report Vol.1
The State of Endpoint Security
More Reports

IBM started losing gound in China well before this week's Chinese Government review of the use of IBM servers in domestic banking. And the Gartner figures show that Chinese server vendors Huawei and Inspur gained significant marketshare in the first quarter of this year. Things look grim for continued sales to China, but banks can't always just swap out servers, as in many cases they're using software that was designed to run on mainframes or Unix boxes.

The bottom line here is that the NSA spying scandal is, once again, turning out to be very bad for U.S.-based tech vendors. No doubt some of that spying was aimed at discovering and thwarting hacking and IP-theft eminating from China. We clearly shouldn't tollerate that kind of hacking, but it's tough for U.S. vendors to thrive without sales to China.
Reply  |  Post Message  |  Messages List  |  Start a Board
InformationWeek Is Getting an Upgrade!