In the shadow of pending layoffs and the division of the company, HP on Wednesday announced improved 3D printing technology and an immersive computing platform.

Long a dominant player in the printer industry, HP aims to become a pacesetter among makers of 3D printers. The HP Multi Jet Fusion builds upon the company's print legacy and expertise in materials science to provide a device that can create 3D objects with varied physical characteristics. To do so, the device uses multiple liquid agents delivered through HP Thermal Inkjet arrays.

HP claims its system represents a breakthrough in terms of cost and speed when compared to selective laser sintering, an alternative 3D printing technique. "HP Multi Jet Fusion is designed to transform manufacturing across industries by delivering on the full potential of 3D printing with better quality, increased productivity, and break-through economics," said Stephen Nigro, SVP of inkjet and graphic solutions for HP, in a statement.

However, HP's foray into 3D printing, also known as additive manufactucturing, remains largely theoretical. The company plans to deliver its first HP Multi Jet Fusion units to businesses next year and plans wide distribution of its HP Print System in 2016. But no pricing or specific availability has yet been announced. Beyond the promise of a product, HP's announcement is a commitment to advance the state of the art in 3D printing.

[But what happens when printers get angry? Look at Cartoon: Hacked-Off Printer.]

HP also introduced a device that will be ready sooner, Sprout by HP, a Windows PC integrated with a scanning camera and spatial sensor that enables what the company refers to as "immersive computing." 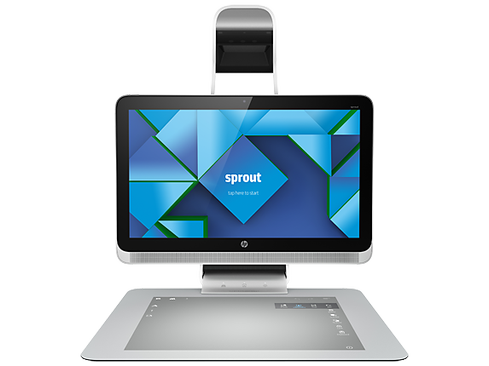 Sprout by HP turns scanning from a one-time event into ongoing, real-time interaction. The PC comes with a camera and a projection system mounted atop its touch-enabled screen. The device projects the user's screen desktop down onto his or her actual desktop, creating a touch-aware tabletop. Physical objects placed on this projected surface can be scanned and converted into digital 2D or 3D objects. The user can then manipulate these digital objects in a graphics app.

HP's device supports collaboration, so multiple users can interact and manipulate the same digital file, for work or entertainment. And when the HP Multi Jet Fusion printer becomes available, Sprout by HP will offer a convenient way to create 3D files for eventual 3D printing.

Starting at $1,900, Sprout by HP is now available for pre-order and is scheduled for release on November 9.

Thomas Claburn has been writing about business and technology since 1996, for publications such as New Architect, PC Computing, InformationWeek, Salon, Wired, and Ziff Davis Smart Business. Before that, he worked in film and television, having earned a not particularly useful ... View Full Bio
We welcome your comments on this topic on our social media channels, or [contact us directly] with questions about the site.
Comment  |
Email This  |
Print  |
RSS
More Insights
Webcasts
Protecting Your Enterprise's Intellectual Property
5 Steps to Solving Modern Scalability Problems
More Webcasts
White Papers
Two-Factor Evaluation Guide
The State of Threat Detection and Response
More White Papers
Reports
The Future of Multi-Cloud Networking 2020
The Drive for Shift-Left Performance Testing
More Reports

So joking aside, what I wanted to see was a video demo of the product. The link included in the article took me to one, and my only sadness was that I wanted to see more of the product and less of the Apple-style posturing. The product itself actually looks fascinating from a creative perspective. I wonder what other applications it could have outside the world of art and design? There has to be something... I'm all ears, cos this is some pretty cool stuff!
Reply  |  Post Message  |  Messages List  |  Start a Board

Please tell me the Sprout was launched at an event in Brussels. Pretty please?
Reply  |  Post Message  |  Messages List  |  Start a Board

I am curious to try the HP Sprout's tabletop projection capabilities. I can see possibilities for image editing, for example.
Reply  |  Post Message  |  Messages List  |  Start a Board
Editors' Choice
Hot Topics