IBM sees the future of quantum computing as having a major impact in the life sciences and chemistry fields.

Technology giant IBM announced two major breakthroughs towards the building of a practical quantum computer, the next evolution in computing that will be required as Moore’s Law runs out of steam.

Described in the April 29 issue of the journal Nature Communications, the breakthroughs include the ability to detect and measure both kinds of quantum errors simultaneously and a new kind of circuit design, which the company claims is "the only physical architecture that could successfully scale to larger dimensions."

The two innovations are interrelated: The quantum bit circuit, based on a square lattice of four superconducting "qubits" -- short for quantum bits -- on a chip roughly one-quarter-inch square, enables both types of quantum errors to be detected at the same time. 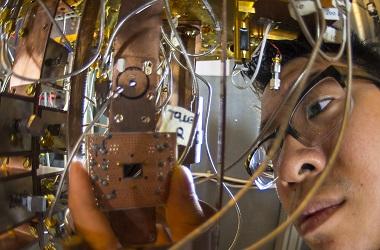 The IBM project, which was funded in part by the Intelligence Advanced Research Projects Activity (IARPA) Multi-Qubit Coherent Operations program, opts for a square-shaped design as opposed to a linear array, which IBM said prevents the detection of both kinds of quantum errors simultaneously.

Jerry M. Chow, manager of the Experimental Quantum Computing group at IBM’s T.J. Watson Research Center, and the primary investigator on the IARPA-sponsored Multi-Qubit Coherent Operations project, told InformationWeek that one area they are excited about is the potential for quantum computers to simulate systems in nature.

"In physics and chemistry, quantum computing will allow us to design new materials and drug compounds without the expensive trial-and-error experiments in the lab, dramatically speeding up the rate and pace of innovation," Chow said. "For instance, the effectiveness of drugs is governed by the precise nature of the chemical bonds in the molecules constituting the drug."

He noted the computational chemistry required for many of these problems is out of the reach of classical computers, and this is one example of where quantum computers may be capable of solving such problems leading to better drug design.

The qubits, IBM said, could be designed and manufactured using standard silicon fabrication techniques, once a handful of superconducting qubits can be manufactured quickly and reliably, and boast low error-rates.

"Quantum information is very fragile, requiring the quantum elements to be cooled to near absolute zero temperature and shielded from its environment to minimize errors," Chow explained. "A quantum bit, the component that carries information in a quantum system, can be susceptible to two types of errors -- bit-flip and phase-flip. It either error occurs, the information is destroyed and it cannot carry out the operation."

He said it is important to detect and measure both types of errors in order to know what errors are present and how to address them, noting no one has been able to do this before in a scalable architecture.

Nathan Eddy is a freelance writer for InformationWeek. He has written for Popular Mechanics, Sales & Marketing Management Magazine, FierceMarkets, and CRN, among others. In 2012 he made his first documentary film, The Absent Column. He currently lives in Berlin. View Full Bio
We welcome your comments on this topic on our social media channels, or [contact us directly] with questions about the site.
Comment  |
Email This  |
Print  |
RSS
More Insights
Webcasts
Building the SOC of the Future: Next-Generation Security Operations
ROI and Beyond for the Cloud
More Webcasts
White Papers
All In, Online Gaming & Gambling
Universal Internet Connectivity: Reality or Myth?
More White Papers
Reports
The Malware Threat Landscape
Email Security Threat Report 2020
More Reports