Posting mixed earnings, Intel tries to catch up in mobile while getting ahead in wearable tech and the Internet of Things.

Intel's fiscal fourth quarter indicates the PC market's ongoing slump might be slowing, but the chipmaker still posted mixed marks. Points of concern include Intel's modest presence in the mobile market as well as its lower-than-anticipated revenue from data center products.

The company reported Thursday that it earned revenue of $13.8 billion, which translates to 51 cents per share, for the quarter that ended December 28. Wall Street analysts surveyed by Thomson Reuters had expected per-share earnings of 52 cents on $13.7 billion in revenue. Intel earned $13.48 billion during Q4 of 2012.

For all of 2013, Intel reported a 1% decline in revenue, to $52.7 billion, as well as slightly larger drops in gross margin, operating income, net income, and earnings per share. The company finished the year with more than $20 billion in cash.

[What will happen to all those XP machines and their networks on April 8? Read Windows XP Won't Go Quietly.]

Intel CEO Brian Krzanich called the performance "solid" during an earnings call with analysts. He emphasized that the company has been investing to get its new line of Atom processors inside more mobile devices. He said its quad-core Atom chip will come to Android tablets in the second quarter.

"We made a shift [to Android]," he told analysts, reminding them that the chips were originally devised with only Windows in mind. 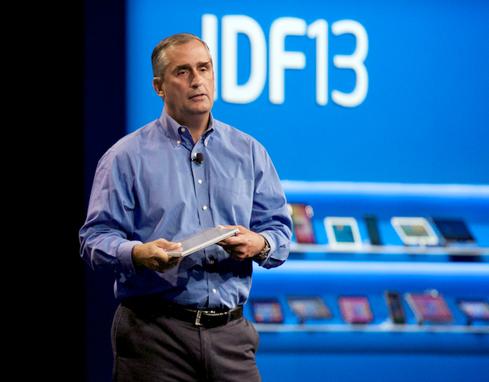 Krzanich said Intel's processors were in more than 10 million tablets by the end of last year, and that the company hopes to reach quadruple that volume by the end of 2014. He also promised dozens of new 2-in-1 devices will hit the market later this year.

Intel makes around two-thirds of its revenue from PC chips, and with the computer market tanking throughout the last year, the company has faced pressure to focus on smartphones and tablets. Time will tell if Intel can make headwind in the competitive mobile space, where most devices run on ARM-based chips. But in the meantime, it can take solace in indications that the PC market might be bottoming out.

Intel CFO Stacy Smith said the PC market is stabilizing. The company reported that desktop volume and average selling prices increased in the fourth quarter, and that it shipped a record number of its Core i7 chips.

With Windows XP set to lose support in April, some analysts expected PC sales would modestly rebound in Q4, as businesses replaced aging systems. But Smith said XP's impending retirement played only a minor role during the quarter.

Intel's chips for data centers performed below expectations. Krzanich indicated healthy demand for chips to power cloud servers but said sales for other data center products were softer than expected. The division posted an 8% year-over-year increase in revenue, but most of the gains derived from a slight uptick in average selling prices. Unit sales improved by only 1%.

Looking forward, Intel expects increased demand for server chips as the proliferation of mobile devices drive the adoption of cloud technologies. The company is also aggressively pursuing new technologies designed for wearable technology and the Internet of Things, both of which were major themes during Krzanich's recent CES keynote speech.

We welcome your comments on this topic on our social media channels, or [contact us directly] with questions about the site.
Comment  |
Email This  |
Print  |
RSS
More Insights
Webcasts
Securing and Monitoring Networks in the 'New Normal'
Strategies for Success with Digital Transformation
More Webcasts
White Papers
A Technical Deep Dive on Software Exploits
The Network for Whatever's Next; A CxO Guide
More White Papers
Reports
2021 Top Enterprise IT Trends
2020 State of Cybersecurity Operations and Incident Response
More Reports

I agree, while wearables (smartwatches etc) might get some traction in the mainstream consumer market, the real market for IoT or machine to machine will be for organizations who are looking to provide newer services and solutions to modernize current ones.  Personaly I can see a lot of growth in traditional areas like logistics, transportation, public services and retail.
Reply  |  Post Message  |  Messages List  |  Start a Board

14 years and a couple of jobs ago, I was designing a high end singleboard computer for a large scale embedded system.  The boss wanted a big-endian RISC CPU but I broght Intel in for due diligence.  They flat-out refused to show me a selector guide, and instead demanded to know exactly what we were building so they could prescribe a CPU and chip set.   Which would then be the only one we could get design info for.   The attitude was unbelieveable.  I was really rooting for the mobile pentium of the time, but Intel was too arrogant to work with.  We settled for IBM's PowerPC of the time, despite its non-existent support ecosystem and clueless field tech support.  Intel needed to learn back then it didn't have a monopoly any more, and start listening to its customers.  I hope they figure it out before they have to start laying off...
Reply  |  Post Message  |  Messages List  |  Start a Board

I'm thinking production environments Tom -- factories, warehouses, processing plants, refineries. The ROI comes from avoiding downtime, stockouts, bottlenecks, inventory failures. And that's where you might want just enough processing power at the point of collection to say "send data back only when its below ABC or above XYZ."
Reply  |  Post Message  |  Messages List  |  Start a Board

>Think Intel can cash in on that IoT opportunity?

I still have doubts the IoT will really excite mainsteam consumers. I see it being much more meaningful in cars and public infrastructure than homes for quite a while.
Reply  |  Post Message  |  Messages List  |  Start a Board

They're opening some of their factories to other companies too. And they axed the TV program and are going to do a small amount of staff reducing. Krzanich seems intent on making things leaner and more focused, even as he talks up a gameplan that's enormously ambitious.
Reply  |  Post Message  |  Messages List  |  Start a Board

Intel's ability to ramp up supply quickly for mobile products used to be a key advantage compared to rivals such as AMD. Today, Intel has more capacity than it needs. Intel just delayed opening a fab in Chandler, AZ in response to weaker demand.
Reply  |  Post Message  |  Messages List  |  Start a Board

Intel is a big supporter of Facebook's Open Compute Project. Don't be surprised if Intel chips start finding their way into several lines of commodity, white box switches that companies will use to build out software-defined networks. It is a small market now, potentially a big one.
Reply  |  Post Message  |  Messages List  |  Start a Board

It seems like many early Internet of things initiatives lean toward shipping all the data back for analysis. But some will take processing at the point of data collection, either for speed or to lessen the data transfer load. Think Intel can cash in on that IoT opportunity?
Reply  |  Post Message  |  Messages List  |  Start a Board
Editors' Choice
Hot Topics