will launch by the end of next year. He promised significantly improved computing performance, battery life, and power efficiency, and he said Skylake chips will be ready to go for everything from high-performance desktops to super-thin 2-in-1s. 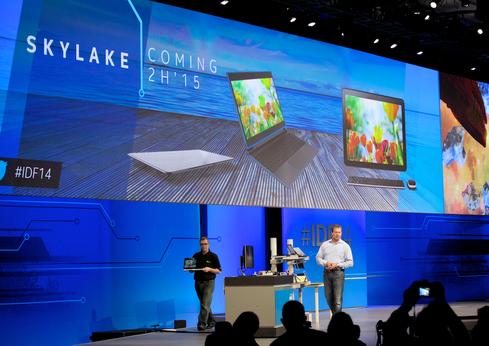 Intel said its "Skylake" chips, due by late next year, will deliver significant processing and battery life improvements.

Skylake will be the second generation of chips manufactured using Intel's 14-nm process. They follow the "Broadwell" families, which recently entered mass production and will begin shipping in devices next month. Skaugen said processors made from a 10-nm process, which would allow even more electronics to be placed on each unit, are already on the roadmap.

Intel doesn't intend to maintain PC demand through faster silicon alone; it also plans to change the way we interact with devices. Technologies such as the RealSense camera and 2-in-1 tablets already speak to this ambition, but Intel's full plan is grander.

For starters, the company wants to eliminate wires. Execs said that, starting next year, new computers will use technologies such as WiGig to connect wirelessly to monitors, storage drives, keyboards, and other peripherals. Intel will also push wireless charging with new technology that can be embedded in furniture and will send a charge through material up to two inches thick. A charging device could be mounted on the bottom of a coffee shop table to charge any gadgets set on top -- including laptops. Krzanich said support for wireless charging would be somewhat backward compatible, because the necessary components can be built into cases for current tablets. In an equally ambitious move, the CEO also said Intel wants to improve security by replacing passwords with biometrics and facial-recognition technology.

Until some of those new technologies come to market, Intel will rely on Broadwell chips to drive PC and 2-in-1 business, starting with the Core M variant that launched last week. The chips -- the most energy-efficient Core processors Intel has ever produced -- enable fanless designs and are aimed at a new breed of ultra-thin 2-in-1s.

Skaugen said Core M devices will deliver eight hours of HD video between charges. These devices will be unprecedentedly thin for their class, at less than 9 mm thick, but Skaugen said they will still offer triple the CPU performance and twice the graphics performance of those with Qualcomm's top ARM chips. He added that Core M chips offer seven times better graphics processing than those in computers released four years ago. 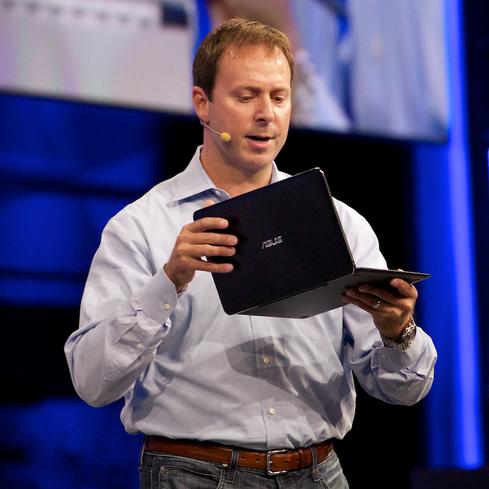 With its emphasis on tablet-laptop hybrids, Core M plays into the urgency Intel feels to gain share among mobile users. But Skaugen emphasized that the company is committed to innovation across the range of computing devices. He referenced an eight-core, 16-thread processor that Intel recently released for PC gaming systems, noting that there are more than 700 million PC games worldwide. He said other Broadwell devices, such as the beefier i5 and i7 chips that will appear in premium pro laptops, will begin shipping in volume before the end of the year. Devices that use those chips will still require fans but should boast better battery life and graphics performance than today's top notebooks.

I keep hoping Intel is right and they will get a toehold in the tablet market. I was at IDF yesterday and hoping to hear more about this, esp. tablets running Android on x86. However, as far as I can tell, most of the so-called tablets running on Intel CPUs are really slates -- that is, PCs running in a tablet form factor. That's a market segment that has been around for a long time and never gotten traction (cf. Surface). Until Intel gets into the tablet market with a popular entree, I think most its dialog on this is wishful thinking, rather than an reality.
Reply  |  Post Message  |  Messages List  |  Start a Board

Andrew, what do you think is missing from the ultra-thin device Dell showed at IDF?
Reply  |  Post Message  |  Messages List  |  Start a Board

Not sure anything is missing, but it has no adoption.
Reply  |  Post Message  |  Messages List  |  Start a Board
Editors' Choice
Hot Topics