IBM will shed its low-margin, low-end server business for $2.3 billion after more than a year of on-again, off-again negotiations with Lenovo.

IBM announced Thursday that Lenovo has agreed to buy IBM's x86 server business for $2.3 billion. The deal will get IBM out of a low-margin business in which revenue declined 16% last year.

The business Lenovo is acquiring includes System x, BladeCenter, Flex System blade servers and switches, x86-based Flex integrated systems, NeXtScale and iDataPlex servers and associated software, blade networking, and maintenance operations. IBM had hopes of selling the x86 business last year, but widely reported negotiations with Lenovo broke down, and IBM announced in May it would not realize what it hoped might be a $5 billion divestiture.

IBM will continue to develop its Windows and Linux software portfolio for the x86 platform. It will also continue to sell several systems based on x86 processors through its PureApplication and PureData appliances, high-margin products that also include IBM software. 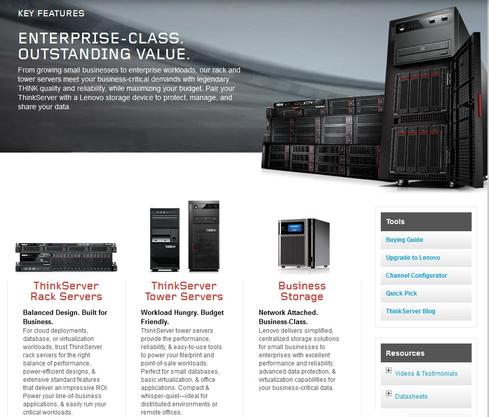 Lenovo's enterprise-class server business is about to expand.

Once the deal is closed, Lenovo will take over customer service and maintenance operations for the x86 business, though IBM said it will continue to provide maintenance delivery on Lenovo's behalf for "an extended period of time." Approximately 7,500 IBM employees in locations including Raleigh, N.C., Shanghai and Shenzhen, China, and Taipei, Taiwan, are expected to be offered jobs with Lenovo.

The deal with Lenovo comes nearly 10 years after Lenovo agreed to purchase IBM's PC business in 2005. Once again it's a case of IBM shifting out of a commodity business so it can focus on high-margin, high-value businesses. The company cited its just-announced $1.2 billion investment in its SoftLayer cloud business and its recent $1 billion investment to build a Watson cognitive computing business as cases in point.

Interop Las Vegas, March 31 - April 4, 2014, brings together thousands of technology professionals to discover the most current and cutting-edge technology innovations and strategies to drive their organizations' success, including BYOD security, the latest cloud and virtualization technologies, SDN, the Internet of Things, Apple in the enterprise, and more. Attend educational sessions in eight tracks, hear inspirational and industry-centric keynotes, and visit an Expo Floor that brings more than 350 top vendors together. Register for Interop Las Vegas with Discount Code MPIWK for $200 off Total Access and Conference Passes.

We welcome your comments on this topic on our social media channels, or [contact us directly] with questions about the site.
Comment  |
Email This  |
Print  |
RSS
More Insights
Webcasts
Making XDR Work in Your Enterprise - May 12
Multi-Cloud Data Management for Modern Applications
More Webcasts
White Papers
Ransomware Defense for Dummies
2020 Digital Transformation Report
More White Papers
Reports
Intelligent Outcomes Are Key to Business Resilience
Are We Cyber-Resilient? The Key Question Every Organization Must Answer
More Reports

I should clarify that the PureData and PureApplication System lines include both x86 and Power (AIX- Unix) based options. PureData System For Analytics powered by Netezza, for example, is a Linux-based system based on x86. Oracle, too, is all but out of the x86 server business, yet its Exadata and Exalytics "engineered systems" are based on x86. The real value and margin in both the IBM and Oracle appliances is in the prepackaged software bundle.
Reply  |  Post Message  |  Messages List  |  Start a Board
InformationWeek Is Getting an Upgrade!