After a month of hype, Microsoft's Surface Pro 3 hits stores on Friday. Consider these facts before you pull out your wallet.

Though some models won't ship until later this summer, the first batches of Microsoft's Surface Pro 3 hit stores Friday, a month after the company introduced the device at an event in New York. The newest Pro has earned better reviews than its predecessors. Praised features include its super-smooth digital pen, which is well integrated with OneNote; its form factor, which is thinner and lighter than those of previous models; and its bright, 12-inch, 2160 x 1440-pixel screen, which is both the biggest and highest-resolution display in the Surface lineup.

The Surface Pro 3 is Microsoft's most compelling hardware effort yet, and one of the better 2-in-1 devices on the market -- but is it right for you? Here are three things to consider:

1. Only the midrange models will be available at launch
Microsoft offers the Surface Pro 3 in a variety of configurations, but only those based on Intel's i5 processor are available Friday. The low-end model with an Intel i3 chip and the high-end models built around i7 processors won't ship until the beginning of August.

Microsoft says customers who pre-ordered and received email confirmation that their devices would ship on June 20 will receive their Pro 3s on schedule. Shipping dates for later pre-orders have slipped to June 30. Microsoft also says a limited number of i5 Pro 3s will be available in brick-and-mortar stores, though the company hasn't said how many units each location will have, nor how quickly depleted stock will be replenished.

Does that mean the Pro 3 is overpriced? Not necessarily-- see the next item. 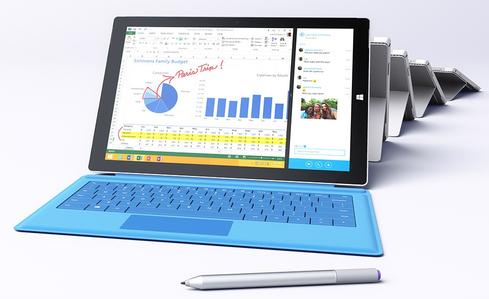 3. The Pro 3 is most valuable for its unique qualities, not its overlap with the MacBook Air
Almost every Surface Pro 3 review has compared the device to the MacBook Air. That's not surprising, given that Microsoft's advertising encourages this comparison, but it's also myopic.

With a Type Cover, the Pro 3 is a fine laptop -- but so is the Air. Whether one is better is pretty subjective. Do you prefer OS X or Windows 8.1? Clamshell designs or click-in keyboards? Does the Pro 3's extra screen resolution matter to you? Basically, if you want a nice laptop and don't care about hybridity, the Pro 3 is a good option, but it's not nearly as easy to justify the price.

If you do care about hybridity, on the other hand, the Pro 3 comes into its own. As a pure tablet, the device is a little large for one-handed use, but its 3:2 aspect ratio still makes it pleasant to hold two-handed. More importantly, the new screen dimensions make the device feel like a legal pad, which makes it natural to use the included pen. The pen could become a significant differentiator as optimized apps come online, and Microsoft has already done a nice job integrating the accessory with the Pro 3's out-of-box software. Ultimately, the device's value isn't in one use-case or the other, but in the user's ability to shift between them.

Michael Endler joined InformationWeek as an associate editor in 2012. He previously worked in talent representation in the entertainment industry, as a freelance copywriter and photojournalist, and as a teacher. Michael earned a BA in English from Stanford University in 2005 ... View Full Bio
We welcome your comments on this topic on our social media channels, or [contact us directly] with questions about the site.
Comment  |
Email This  |
Print  |
RSS
More Insights
Webcasts
SASE: The Right Framework for Today's Distributed Enterprises
Managing a Hybrid Cloud Infrastructure
More Webcasts
White Papers
The 2021 Threat Hunting Report
WhiteHat Professional Services Package
More White Papers
Reports
The Infoblox Q4 2020 Cyberthreat Intelligence Report
DNS Network Traffic Volumes During the 2020 Pandemic
More Reports

We'd love to hear from any of you who hit stores to play with the device this weekend.
Reply  |  Post Message  |  Messages List  |  Start a Board

Good point on the CPU speed. For what it's worth, I've found the Surface Pro 3 to be very speedy for general use, and quite capable for more advanced tasks, like editing photos. I'm curious, though, to see how far the i7 version can be pushed. I'm also curious how much more power future devices of this form factor might have (as opposed to just enery savings) with the upcoming Broadwell chips.
Reply  |  Post Message  |  Messages List  |  Start a Board

It's hard to know how big a deal pre-orders are. If you really want the device, pre-orders a big deal, since they're the only surefire way to secure a unit as soon as possible. But otherwise, tough to say.

Microsoft claimed certain Surface Pro 2 configurations sold out almost instantly-- but that was mostly PR spin. Now that the company's financials from that period are public record, it's clear Microsoft simply didn't make that many Surface Pro 2s to begin with. On the one hand, this strategy makes sense-- Microsoft produced more first-generation devices than it could sell, to paraphrase Steve Ballmer. On the other hand, a sold-out debut doesn't mean much if Microsoft artificially limits stock.

That brings us to the Pro 3. Shipping dates slipped for late pre-orders, which suggests decent initial demand. But again, we don't know much about Microsoft's manufacturing strategy, so it remains to be seen how much demand there actually is.

All that said, I wouldn't be surprised if this is the best-selling Surface by a big margin. It's certianly the best of Microsoft's tablets, and one of the best Windows hybrids.
Reply  |  Post Message  |  Messages List  |  Start a Board

If you have a chance to leave a comment later, after you've taken the device for a spin, I'd be curious to know how you like it.
Reply  |  Post Message  |  Messages List  |  Start a Board
InformationWeek Is Getting an Upgrade!