"You'll pay less, but you'll have to be willing to accept better performance."

That's the claim Oracle executive chairman and CTO Larry Ellison kept repeating throughout his unveiling of the fifth generation of Oracle Engineered Systems on Wednesday. It's the product line led by Exadata and other "Exa" products that feature software preintegrated with compute, storage, and networking hardware.

"We do the integration so you don't have to," said Ellison at the outset of a 45-minute keynote.

Oracle says it has shipped more than 10,000 Engineered Systems, and Ellison pointed to recent server shipment statistics as proof of success. Gartner's Q3 server revenue and unit shipment report from December actually shows that Oracle was flat on overall server revenue in Q3. But in the RISC/Itanium market, where Oracle offers M-series Sparc Servers and Supercluster engineered systems, Oracle had a 2% gain in Q3 revenue and whopping 6-point gain in market share. Rivals IBM (with Power servers) and HP (with Itanium servers) posted 29% and 10% declines, respectively. 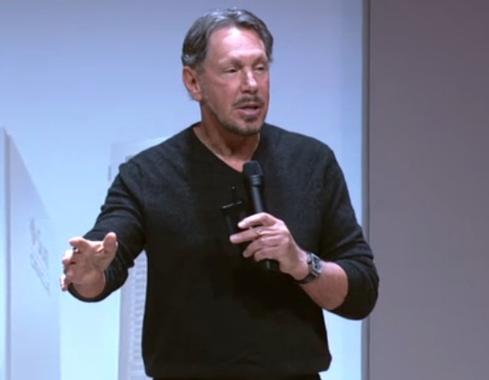 "We're right around half the cost of Cisco UCS ... and that's our list price compared to their discounted price," said Ellison dryly. "And we will negotiate and we will discount off of our list price."

The key point that Ellison kept returning to is that the "engineered" in engineered systems is about integrating and optimizing the software to work with the hardware. Oracle controls everything in this equation -- compute, networking selection (Infiniband), storage, and software (operating system and virtualization on the VCA) -- so it can integrate, optimize, and test everything in sync, eking out greater performance in the bargain.

Oracle didn't invent these preintegrated machines, Ellison granted, crediting Teradata for pioneering data warehousing appliances and Cisco with pioneering converged servers with UCS. But Oracle can beat these pioneers, he said, by delivering better performance at a lower cost. The lower-price claim is new to Oracle's strategy, Ellison said, and it's a tack it's taking because "we're tired of having the argument" that better performance translates into lower total cost of ownership.

Indeed, control over database, middleware, and plenty of applications does give Oracle huge advantages, and it's a key reason why IBM PureData systems have not matched the success of Oracle's Exa products. IBM lacks the applications and its databases are losing ground to Oracle and Microsoft SQL Server. (Warning: Would-be buyers should check the cost of licensing the software that comes with engineered systems, as that's not always included in Oracle price listings.)

Oracle, Gartner, and IDC don't really break out Oracle Engineered Systems with hard, public numbers, so we're left with squishy claims. Are those gains Oracle CEO Mark Hurd always trumpets tied to low-cost products, like the Oracle Database Appliance, or to high-end products like Exadata, Exalogic, and Supercluster? We can't really know for sure, but the move away from roll-your-own approaches and consulting and integration services is being validated by Cisco, HP, and others.

To Ellison's point, Oracle controls more software and, in many cases, more popular software, than its hardware competitors, so it's playing the right card in promoting engineered systems.

And, according to Mark Hurd, looking at latest financial statements, Engineered Systems represent 1/3rd of Oracle's hardware product sales and is growing at double-digit rates.  So while Oracle still sells individual servers, for those, what I call "legacy" BIY IT customers, the clear focus @ Oracle today is selling the value proposition of Engineered Systems, and as you can see by the reaction, and the growth, it's a clear growth market.

Looking at the last several quarters of reported results, its evident that Oracle is the market leader and that Cisco and/or VCE are behind. So while Oracle is #1, its clearly focused on staying #1, and that means attacking #2 and #3.

18 Dec 2014 -Third Quarter Revenue for Worldwide Integrated Infrastructure and Platforms Increased 28.1% Year Over Year to $2.3 Billion, According to IDC

25 Sep 2014 - Worldwide Integrated Infrastructure and Platforms Revenue Increased 33.8% Year Over Year to $2.4 Billion in the Second Quarter of 2014, According to IDC

26 Jun 2014 Worldwide Integrated Infrastructure and Platforms Revenue Increases 38.5% Year Over Year in the First Quarter of 2014, Surpassing $1.9 Billion in Value, According to IDC

"During the first quarter of 2014, the Integrated Platforms market generated revenues of $769.6 million, which represented an 8.3% year-over-year growth rate and 39.5% of the total market value. Oracle was the largest supplier of Integrated Platform systems with $369.0 million in sales, or 48.0% share of the market segment"

30 Apr 2014 Worldwide Integrated Infrastructure and Platforms Revenues Increase 45.6% Year Over Year in 2013, Approaching $7.6 Billion in Value, According to IDC

"The Integrated Platforms market generated nearly $3.6 billion in sales during 2013, which represented a 12.2% year-over-year growth rate and 47.3% of the total market value. Oracle was the largest supplier of Integrated Platform Systems with $1.4 billion in sales, or 39.1% share of the market segment"
Reply  |  Post Message  |  Messages List  |  Start a Board
Editors' Choice
Hot Topics