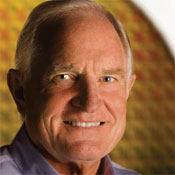 "We have Our Priorities A Little Bit Wrong" -- Craig Barrett

Craig Barrett is not only the renowned former chairman of Intel-he stepped down in May 2009 after a 35-year career at the semiconductor leader--but he's also a vocal advocate for reforming the U.S. education system and enhancing the country's technology-based competitiveness. Barrett recently talked with InformationWeek.com editor in chief Alexander Wolfe about the steps he thinks the U.S. must take to secure and bolster its tech leadership position.

InformationWeek: What's your assessment of where U.S. competitiveness stands today?

Barrett: The United States has moved from a period where we were really the only game in town to one of greater worldwide competition. The National Academies' report "Rising Above The Gathering Storm" lays out the challenge. It's education, it's R&D, and it's the environment in the United States to promote investment in innovation. Other people are making bigger investments and working harder than we seemingly have over the past couple of decades.

InformationWeek: Does this mean that national policy makers overseas are helping their domestic tech industries, and here in the U.S. companies such as Intel are on their own?

Barrett: I don't think it's so much tech policy as it is the recognition of what the 21st century is all about. The rest of the world recognizes that education is important, that investing in new ideas--R&D--is important. And then you need to have the right environment to get smart people together with smart ideas. That right environment is everything from corporate tax rates to Sarbanes-Oxley to the availability of venture capital and intellectual property protection. A lot of the world has recognized that smart people, smart ideas, and the right environment are the only three levers you can pull, and they're pulling them.

InformationWeek: You sound like you despair of the situation, so let me ask you: Is there any danger Silicon Valley could become the next Detroit?

Barrett: It's got a long way to go before it gets to Detroit. You've still got a couple of great universities--Berkeley and Stanford. They're spinning off smart ideas and smart people, and you've got lots of venture capital. So you've still got a catalytic environment there.

InformationWeek: When you talk about education, you seem to be alluding to the fact that our culture doesn't value intellectual achievement or point kids toward science and engineering.

Back Issues | Must Reads
White Papers
IT Careers: Tech Drives Constant Change
Data Protection: Verify Anything and Everything
6 Emerging Cyber Threats That Enterprises Face in 2020
Research Report: Rethinking Security for Digital Transformation
PWAs: Powering Next Gen Business on the Web