InteropNet Live: Behind The Scenes With NetBeez - InformationWeek

Interop is one of the largest trade shows for IT professionals. Each year, the organizers assemble a team of volunteers and vendor partners to build InteropNet, a state-of-the-art network that provides connectivity for the show's 12,000 attendees and 300 exhibitors.

Interop Las Vegas is showtime for the InteropNet NOC crew, which has to quickly fix anything that breaks so that organizers, attendees, and exhibitors don't have to think twice about network connectivity and performance.

The faster that affected users and locations are identified, the easier it is for the NOC team to triage the problem and resolve it.

NetBeez installed 42 agents at the two collocation data centers, the trade show, and in the cloud: 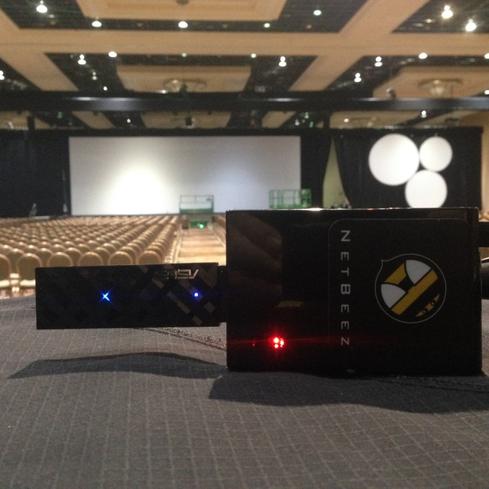 The following table summarizes InteropNet’s end-user monitoring requirements and the types of tests NetBeez configured to fulfill those requirements.

The excellent planning and testing that took place during Hot Stage resulted in a smooth setup of InteropNet in Las Vegas.

As expected, when thousands of attendees stormed the trade show during expo hours, the agents experienced increased time to fetch Internet pages, such as google.com, as shown in the screenshot. 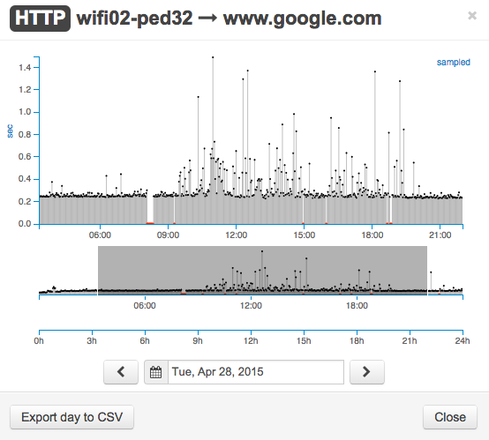 On the morning of Wednesday April 28, we came across an interesting performance alert that showed an increase in the latency time from the agents in Las Vegas to google.com.

The spike occurred at 3:30 am, happened pretty abruptly, and stayed constant after that. It was easily identified on the ping historical graph, as shown in the screenshot. 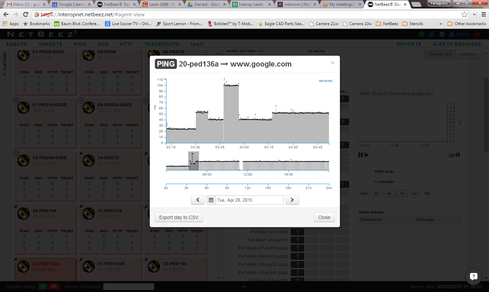 At the same time, there was an alert triggered on the traceroute tests targetting google.com. The historical showed that the number of hops went from nine to twelve, clearly indicating a routing change that caused the ping latency spike. 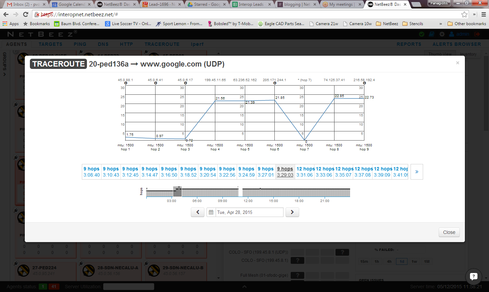 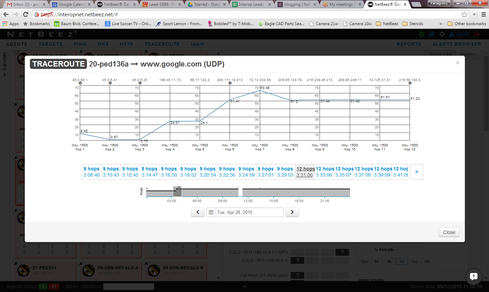 The good news was that this change was planned by the NOC and thus wasn’t a cause for concern. Nonetheless, it demonstrated  the role of proactive monitoring to identify network performance and connectivity issues.

InteropNet is built from scratch year after year to demonstrate the latest networking and monitoring technologies to the attendees of the show.

It's also a way for the NOC team to stay abreast of the latest developments and educate interns that volunteer for at least two weeks between Hot Stage and Interop itself. NetBeez is looking forward to next year's event!

Panos is a cofounder of NetBeez, a distributed end-user network and application monitoring tool. He developed parallel computing algorithms at Carnegie Mellon University before cofounding NetBeez. He is in charge of operations and of developing the perfect "Beez." View Full Bio
We welcome your comments on this topic on our social media channels, or [contact us directly] with questions about the site.
Comment  |
Email This  |
Print  |
RSS
More Insights
Webcasts
The Death of Network Hardware Appliances
How to Be Ready for Ransomware
More Webcasts
White Papers
Serial Console Servers
Digital Innovation: Opportunities, Risks, & Responsibilities
More White Papers
Reports
Consistent Data Protection Requires a New Approach to Securing Access
[Report] 2022 Rankings - IT Service Management
More Reports

More Informa Tech Live Events
How To Move Beyond Passwords: The first step into a passwordless futureScaling Up DevOps for the Full EnterpriseMaking E911 Work for Hybrid Work