InteropNet providers TSO Logic and ThousandEyes weighed in on their experience helping to run InteropNet, the custom-built production network that provides connectivity and wireless for attendees, exhibitors and staff at Interop Las Vegas.

According to a blog by TSO Logic, the average cost per wireless user was 2.30 cents, though that number jumped to as much as 40 cents per user during peak times. 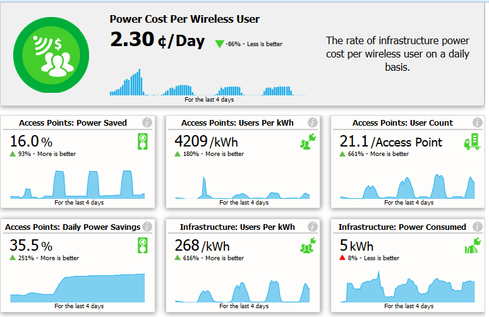 By using TSO Logic, InteropNet engineers also had the opportunity to save energy by powering down systems as usage dropped—and powering back up as necessary to meet demands.

Meanwhile, ThousandEyes pitched in on InteropNet to monitor performance and help troubleshoot performance problems. The company deployed six agents (running as virtual appliances) at key points in the network, including four VLANs for the exhibition space and conference rooms, and one each at InteropNet data centers in California and Las Vegas.

With agents in place, ThousandEyes ran a variety of tests to probe InteropNet services, including tests for the mobile app and registration servers. The company also monitored BGP routing.

One problem ThousandEyes noticed was a service interruption for Salesforce.com; during two separate periods, the site was unavailable from InteropNet. It turned out to be an issue at a peering point between CenturyLink, the InteropNet’s ISP, and Comcast.

Drew is formerly editor of Network Computing and currently director of content and community for Interop. View Full Bio
We welcome your comments on this topic on our social media channels, or [contact us directly] with questions about the site.
Comment  |
Email This  |
Print  |
RSS
More Insights
Webcasts
Tools for Better Network Monitoring and Observability
Digital Innovation: Opportunities, Risks, and Responsibilities
More Webcasts
White Papers
Run and Transform
The State of Encrypted Attacks Report
More White Papers
Reports
2022 IT Salary Survey
The Rise of the No-Code Economy
More Reports