AirWatch's Dominic Schmidt-Rieche says all the right ingredients are available, but data security is still a concern.

At Interop London this year, there’s plenty of discussion about the Internet of Things (IoT) and its impact on business growth and future innovation. But if you ask Dominic Schmidt-Rieche, sales manager at AirWatch, it’s really not a new concept. During his session, “Securing the New World of Smart, Interconnected Devices,” he said that IoT dates all the way back to the television remote, invented by Eugene Polley and Zenith Radio Corporation in the 1950s.

The reason IoT is only now gaining traction, Schmidt-Rieche says, is that all of the necessary ingredients are finally coming together. 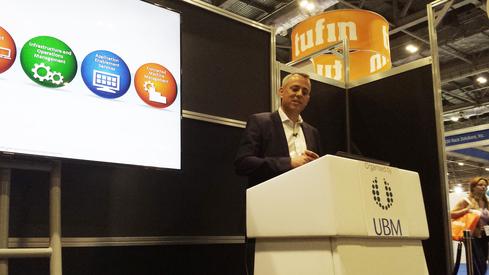 Schmidt-Rieche says that the same thing is now happening with IoT. The ecosystem, the applications, and the use cases have all come together to create the perfect storm, allowing IoT to explode.

The stats suggest he’s right. It is estimated that there are currently more than four billion devices with IP addresses, and Gartner expects that this figure will rise to 25 billion by 2020.

AirWatch envisages the mobile device becoming the television remote of the future, and as a leading mobile device management solution provider, is positioning itself to ride the impending wave.

Of course, there are still many questions and concerns that need to be addressed, Schmidt-Rieche says. The attention on data privacy and protection is becoming more acute. Society is slowly starting to wake up to the fact that their data is valuable. Even enterprises, which have always placed an emphasis on data protection, are re-evaluating their understanding of data protection for IoT.

In addition to the data security challenges, Schmidt-Rieche says there is still a lack of standardisation across chips, components, data communications, and data formats that need to be addressed, as well as the need for more automation in business for IoT to truly succeed.

Sean McGrath is a freelance IT writer, researcher, and journalist. He has written for PC Pro, the BBC, and TechWeekEurope, and has produced content for a range of private organizations. Although he holds a first class degree in investigative journalism, his dreams of being a ... View Full Bio
We welcome your comments on this topic on our social media channels, or [contact us directly] with questions about the site.
Comment  |
Email This  |
Print  |
RSS
More Insights
Webcasts
Disaster Recovery/Business Continuity in the New Normal
Multi-Cloud Data Management for Modern Applications
More Webcasts
White Papers
Top Serverless Security Risks and How to Mitigate
Ransomware Security Breach Summary: Food Production
More White Papers
Reports
The State of Endpoint Security
The Infoblox Q4 2020 Cyberthreat Intelligence Report
More Reports