The Interop Book Club debuts with "No Place To Hide: Edward Snowden, the NSA, and the U.S. Surveillance State" by Glenn Greenwald.

I’m launching the Interop Book Club with “No Place To Hide” by Glenn Greenwald. “No Place To Hide” details Greenwald’s encounters with Edward Snowden, the now-infamous leaker of NSA documents that detail many of the agency’s surveillance efforts, including programs that target American citizens.

Because I can’t have all of you in my living room to discuss the book (the snacks and wine alone would bankrupt me), I thought I’d try it online instead. You can participate by sharing your comments and questions below, and engaging with other participants both here and through social media.

I’ll post updates on the book as I read it to keep the conversation going. And if you happen to attend Interop New York this fall, I’ll host an in-person meet-up for book club participants (with snacks).

I chose the book because I’m alarmed by Snowden’s revelations. The NSA’s capability and willingness to gather huge troves of information on American citizens, often in concert with major telephone and Internet companies, should trouble anyone concerned with civil liberties and a free society. I wanted to find out more about Snowden and the information he exposed, and about the people Snowden chose to help him disseminate the documents.

Snowden and Greenwald are polarizing figures. Many have called Snowden a whistleblower, a patriot or even a hero. Others are repelled by Snowden's actions; venture capitalist Marc Andreessen called Snowden a textbook traitor in an interview on CNBC.

As for Greenwald, he fiercely believes that his efforts to share Snowden’s revelations, particularly around domestic spying, are unambiguously right and just. For Greenwald, the stakes are immense: 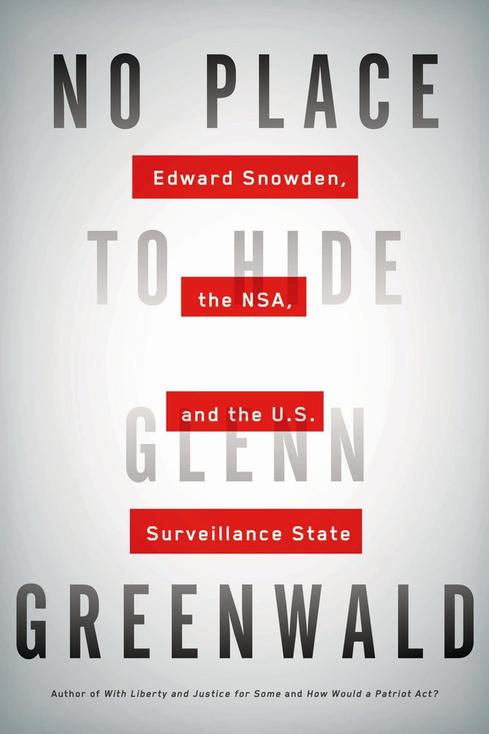 While I share Greenwald’s anxiety about the rise of a surveillance state, the fact is he can be bombastic and aggrandizing. Michael Kinsey, reviewing Greenwald’s book in the New York Times, writes “Greenwald seems like a self-righteous sourpuss… .”

But personalities aside, Greenwald’s book raises a host of compelling questions. I’ll kick off the book club with this one:

Should Edward Snowden come back to the United States to face the consequences of his actions?

I ask because there are several points in the first couple of chapters of the book where Snowden acknowledges the gravity of actions, and says he is prepared to deal with repercussions. According to Greenwald, Snowden wrote “I’m not afraid of what will happen to me. I’ve accepted that my life will likely be over from my doing this. I’m at peace with that.”

Greenwald says Snowden insisted over and over that he was at peace with the consequences of actions, be it “a lengthy prison term” or something worse.

I think Snowden could demonstrate the strength of his convictions by returning to the United States to face trial. His presence in Russia casts instant suspicion on his motives. Is he really an idealist who wanted to expose mass domestic spying, or just a spy?

Snowden certainly didn’t help his case by appearing on Russian television in April to ask Vladimir Putin if Russia spied on its own citizens. Putin, of course, gleefully answered in the negative. Snowden later defended his participation in what was clearly a Russian publicity stunt by claiming he wanted to get Putin’s lie on record. Snowden may have achieved this rather dubious goal, but at great cost to his own credibility.

If Snowden returns to the U.S., he dispels suspicions about his motives and demonstrates that he truly is willing to accept the consequences.

Certainly he would face trial and likely be convicted of a multitude of crimes. He would likely spend a very long time in jail. However, as a prisoner of conscience in the United States, Snowden becomes a much more potent figure. I think the gravity of his sacrifice would carry more weight with Americans who might otherwise dismiss what he’s done.

And what he’s done is expose, in detail, a surveillance apparatus that can reach into the most private corners of our lives.

Greenwald reports that Snowden’s greatest fear wasn’t capture. It’s that “people will see these documents  and shrug. The only thing I’m worried about is that I’ll do all this to my life for nothing.” Let’s hope not.

Let's unpack just a piece of that, this idea that "unbridled NSA surveillance of American citizens is vastly more harmful to our democracy than Snowden's exposure of it."

What's harmful to democracy is when we cease valuing the primacy of the rule of law.

The information the NSA is gathering is (to a significant degree) exactly what we happily give up to Google, Apple, Amazon, etc. The metadata on phone calls is stored by the phone companies, and the legality over ownership and expectation of privacy of data turned over to a third party is far from clear. Americans freely elected the politicians who enacted and expanded the Patriot Act, which as you may recall, expressly "allows government agencies to gather "foreign intelligence information" from both U.S. and non-U.S. citizens."

We got *exactly* the government actions we asked for via our elected representitives. If you don't like it, tell your representatives to repeal the Patriot Act or vote for the new "USA Freedom Act" seeking NSA reforms.

Had Snowden made these revelations in a limited and responsible manner, then stayed around and dealt with the fallout, he'd be a whistleblower -- civil disobedience, as Charlie says. He didn't. He stole vast amounts of data, broke his employment contract, fled the country, and damaged our national security by sharing reportedly very sensitive data with Russia and China. That makes him a criminal and a traitor.

Comparing this to civil rights struggles is insulting. I am not saying it wasn't good to have this conversation. But the ends do not justfy the means.
Reply  |  Post Message  |  Messages List  |  Start a Board

The relevant part of the definition is "the crime of betraying one's country" -- "attempting to kill the sovereign or overthrow the government" are examples, not limiters. He clearly betrayed the trust his country put in him when giving him access to Top Secret material by stealing that data and giving the Chinese and Russion intelligence services access to it.
Reply  |  Post Message  |  Messages List  |  Start a Board

To me Snowden actions smack more of a tradition of civil disobedience than traitorous activity. I have no doubt he meets the legal definition of traitor, but something more fundamental is at stake than whether he could be convicted on the charge. We have tolerated breaking the law up to a point when it had the possible outcome of resulting in a social good. (Martin Luther King was a traitor to J. Edgar Hoover.) To me, it's better for citizens to know the full scope of their government's surveillance than to know one violator has felt the full wrath of the law. Snowden shows signs of being, if not delusional, at least narcissistic, to me as well as Lorna, and he remains a very poor example to future generations. One of the rules of civil disobedience is that you stick around to take the consequences of your actions. Snowden didn't. But history is likely to conclude he struck a necessary blow to preserve individual freedoms, not undermine them.
Reply  |  Post Message  |  Messages List  |  Start a Board

The definition of treason is pretty straightforward, and he certainly meets it. He stole a vast amount of classified information after vowing to keep it secret, shared it with foreign governments, including geopolitical adversaries, and damaged US security and relationships. Anyone who didn't think the NSA was watching this data is naive -- the entire mandate of the agency is to intercept electronic communications. What lala land are people living in?

Wholesale dumping of classified information is illegal and puts all of us at risk. Our system offers legal options to disgruntled employees and contractors -- there are federal whistle-blower laws. They can go talk to their congressperson. They can even very selectively leak data to the press then have the integrity to stay around and take responsibility. He did none of those.

I think he could get a fair trial, and that he'd be convicted of treason. He has gone WAY beyond just exposing a few NSA programs. He broke the promise he made when he was granted a TS clearance and has given information to Russia and others that has damaged our ability to protect our citizens. From watching the recent Brian Williams interview, I think he's delusional and very, very taken with is own importance. I don't see him ever voluntarily returning to answer for his actions.
Reply  |  Post Message  |  Messages List  |  Start a Board