Facebook told my kids they were getting a snow day before their school did.

This week I had my first experience with a snow day that was mediated by social networking. I live outside Philadelphia and our region was caught up in the massive storm that blanketed much of the northeast this past week. My kids went to school as usual on Tuesday morning, but were sent home early in anticipation of the storm.

That afternoon, as we watched the road vanish beneath a torrent of flakes, the big question was whether school would be called off on Wednesday. My opinion, which was not welcome, was that the town had sufficient notice to prepare, and that plowing and salting would make the roads safe by morning.

Afternoon gave way to evening, and my kids’ anxiety level was rising. The inches were mounting up, but now and then the snow was splashed by the whirling yellow safety lights of salt trucks and snow plows.

My wife kept her tablet on hand to check a Facebook group for our town, where members post items of local interest. Contributors debated online about whether there would be a delayed opening or a full snow day.

Several Facebook contributors took it upon themselves to refresh the school’s Web page over and over, in hopes of getting to be the very first one to report the school’s decision. Others monitored TV channels, scanning for our district’s name among the closure notifications crawling across the bottom of the screen.

“Anything yet?” asked my sons approximately every two minutes.

One guy posted to the group that he’d just seen our school come up on the local CBS station, but was immediately corrected by several others, who said he’s misread the name. Duly chastised, the original poster issued a sheepish apology. My children howled for his blood.

“When I was a kid, we didn’t have all this Internet stuff,” I said. “We had to wait until morning and listen to radio while they read out the names in alphabetical order. Our school started with an “S” so the wait was excruciating.”

They had little sympathy for life as it was lived in the stone age.

“I’ve got something!” called my wife. A Facebook poster had announced that the school Web site was declaring a snow day for Wednesday. It took awhile to get official confirmation because so many people checked the school’s site at same time that it went offline for a bit.

Once the snow day was confirmed, there was much dancing and rejoicing and firing of Nerf guns into the air.

The following morning dawned as bright and peaceful as a Bob Ross painting, with our neighborhood buried beneath nearly a foot of white crystals. So delighted were my kids at the thought of a snow day that didn’t complain even once when I sent them outside, shovels in hand, to get to work on the driveway. 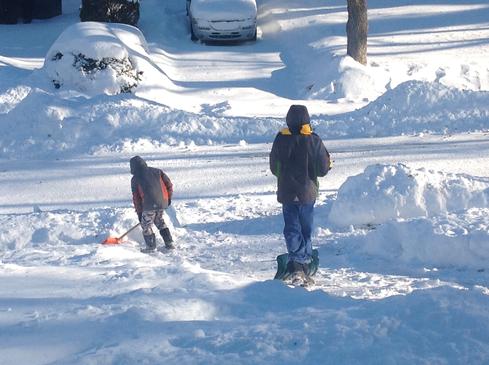 We welcome your comments on this topic on our social media channels, or [contact us directly] with questions about the site.
Comment  |
Email This  |
Print  |
RSS
More Insights
Webcasts
People Are The Most Important Part of Autonomous SOC
Nip Ransomware in the FUD: Detecting Attacks Pre-Encryption
More Webcasts
White Papers
The State of Endpoint Security
iPaaS Intrigue: A Faster Path to Digital Transformation
More White Papers
Reports
Trustwave Global Security Report
Improving Security by Moving Beyond VPN
More Reports

@mpardi949, technology is really shaping our lives in ways we never thought of before. Yes that is the inherent problem with information taken from social networking websites that we can never rely completely on that information. We have to wait for the official announcement. Social networking information is more like excitement exhausting platform. Official Facebook page for schools seem to be a workable option.
Reply  |  Post Message  |  Messages List  |  Start a Board

I could only imagine the curiosity of kids about their next day J We experienced this curiosity much more than today's kids as our times were not equipped with such technology. We had to wait much longer with our hearts pounding with mixed feelings of hope and disappointment at the possible announcement of off or working day ahead.
Reply  |  Post Message  |  Messages List  |  Start a Board

Drew, this story illistrates clearly how technology is impacting our everyday lives and in particular the education market.  The power of the sociai network to get the word out is cool - but what would be cooler is a sytem custom built for the school system to get the word out officially.  Should schools have a face book emergency page?  And sounds like the school could use a little more horsepower to suport surge in traffic (and why is the k-8 education industry typically slowest to adopt new tech??)  Hope the kids had a fun day!
Reply  |  Post Message  |  Messages List  |  Start a Board

Drew, I am completely jealous. We are drying up in California and SOOOO need rain days! :)

Growing up in NJ I remember 'delayed opening' days. Those were the worst!
Reply  |  Post Message  |  Messages List  |  Start a Board