Ladders are dangerous. Appelix wants to replace them with airborne robots for industrial applications.

According to OSHA, the most dangerous thing a worker can do is climb a ladder. In 2014, falls accounted for roughly 40% of all the deaths in construction, the most dangerous line of work in the US, according to the Department of Labor. That's why Appelix, an 18 month-old company based in Jacksonville, Fla., wants to replace humans on ladders with flying robots.

In a telephone interview, Bob Dahlstrom, Appelix's CEO and founder, told InformationWeek about the experience that brought the challenge of ladders home to him. "I worked my way through college painting houses," Dahlstrom said, so when it came time to paint a newly-acquired vacation home, he decided to do the work himself. A few dozen trips up and down the ladder to reach the second story had him thinking of better ways to get the job done, and the idea for the Appelix Worker Bee was born.

The Worker Bee is built of four main components, Dahlstrom said: the base station with a computer and store of materials, an umbilical cable, a quad-copter, and the software that ties the other components together. "Because my background is software, to me drones are software," said Dahlstrom.

The software and umbilical cable are what led Dahlstrom to call the Worker Bee a flying robot rather than a drone. "If you just call it a drone, you're missing the other components. It takes a while for the idea of the umbilical system to sink in," he explained. In the current iteration of the Worker Bee, the intelligence of the software helps a human being control the airframe as it delivers a liquid, such as paint, to a target. 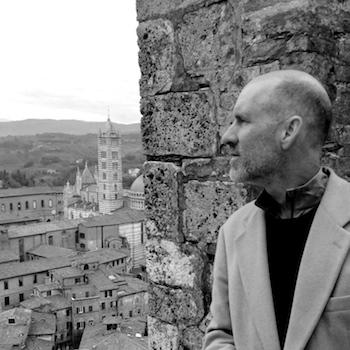 "The first [prototype] was a can of compressed air on the drone and a tank of paint, and it would go up to a wall and hit a target with paint," Dahlstrom said. "We were afraid that the nozzle sticking out would be a problem for navigation, but we corrected for that with software. Then we worried about the prop wash affecting the paint, but that turned out not to be such a problem."

Subsequent prototypes carried a garden hose, a hose from a 300 psi compressor, and finally a 3,000 psi high-velocity paint-sprayer system. It is this final version that is attracting potential industrial customers and partners.

One potential partner Appelix is in discussions with is Tokyo Power. "They put out an RFP for 'Innovative Technology for Coating Transmission Towers,'" said Dahlstrom. "We're one of the finalists for that, and if we get it we would partner with them to develop the specific application. The timeline on this should be a decision by the end of February."

One question that Dahlstrom can't yet answer is whether the umbilical cable means that the FAA will leave the Worker Bee alone, from a regulatory point of view. He said he talked to one lawyer who told him the umbilical would shield the system from regulatory scrutiny. Then, he talked to another lawyer who said that the fact that the system leaves the ground using propellers means that the FAA still has a lot to say. It's a question that Dahlstrom looks forward having answered in the near future.

Farther into the future, the question becomes how many applications Dahlstrom and his partners can find for the patent-pending system. In conversation, Dahlstrom quickly turns toward de-icing airplanes, painting high structures, and delivering dangerous chemicals, like herbicides and pesticides, as near-term applications. Then he warms to the subject and goes a bit deeper.

Looking even further ahead, Dahlstrom said he sees potential humanitarian uses: "Think of the drone as a 3D print head. You'd have [a] rail-less 3D print system. We've been invited to join Roboticists Without Borders. We've had a drone with a tether that can spray expanding foam in a circle, go up, and in smaller circles, so it basically prints an igloo. The idea is that [it] ultimately prints emergency housing."

Then there's the software component. "The other thing we're looking at doing is automating the drone so it doesn't need any human intervention for painting a building," Dahlstrom said.

He is excited about the prospect of removing human decision-making from industrial processes. "We're also looking to replace human judgment with automation," he said. "Now, for example, instead of using a person for de-icing [a plane] you can have four drones that use big data from environmental sensors to formulate the de-icing fluid and minimize the environmental impact, while keeping a person out of the hazardous zone."

Out of the hazardous spray and off ladders -- that's where Dahlstrom thinks humans should stay.

Curtis Franklin Jr. is Senior Analyst at Omdia, focusing on enterprise security management. Curtis has been writing about technologies and products in computing and networking since the early 1980s. He has been on staff and contributed to technology-industry publications ... View Full Bio
We welcome your comments on this topic on our social media channels, or [contact us directly] with questions about the site.
Comment  |
Email This  |
Print  |
RSS
More Insights
Webcasts
Bolstering Your Enterprise Cyber Risk Assessment
Disaster Recovery/Business Continuity in the New Normal
More Webcasts
White Papers
Zero Trust Guiding Principles
The State of Malware Threats
More White Papers
Reports
Enabling Enterprise Resiliency Through Cyberthreat Detection
Gartner Market Guide for Insider Risk Management Solutions
More Reports