Michigan police are working with university researchers to re-create a dead man's fingers. The goal is to use the digits to unlock his smartphone and uncover information that may help catch his killer.

Michigan police are taking an unusual tactic to solve a murder case. In hopes of revealing his killer, they're working with a university to create 3D copies of the victim's fingers in order to unlock his smartphone.

The victim's fingerprints were already on file with the police department from an earlier, unrelated incident. However, the prints alone are not enough to unlock the phone. The victim's own fingers cannot be used, for reasons that will make you cringe. So, according to a report in the Daily Mail, police are working with Michigan State University to recreate the victim's fingers using the university's 3D printing lab.

The desire by law enforcement to access a locked smartphone has come up before, most notably in the high-profile case involving San Bernardino terrorist Syed Farook. In that case, FBI officials sought to unlock his iPhone. Farook, however, did not have a fingerprint reader, or Touch ID, on his iPhone 5C.

[What you need to know about Apple and the FBI. Read Apple, FBI, Congress: 5 Burning Questions.]

As a workaround, Michigan State University Professor Anil Jain and his PhD student Sunpreet Arora have been able to create 3D copies of the victim's fingers with a thin layer of conductive metallic particles coating the plastic digits. This metallic material is designed to emit an electrostatic charge, the Daily Mail reported. Currently, the 3D fingers are being tested in the lab, and the results are not known. 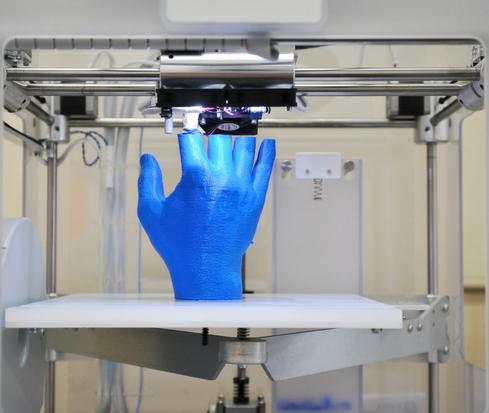 3D fingers are the only the latest effort to potentially fool a fingerprint scanner. Other techniques have been used with more primitive materials, The Verge reported. Unlike Apple's more recent iPhones, older versions of smartphones reportedly do not necessarily need the presence of an electrostatic charge to unlock a phone.

Even as the technology advances, legal precedent about unlocking devices in the event of a criminal case continues to evolve. For example, a recent court case in Los Angeles came down in favor of the FBI, which sought to compel a woman to use her fingerprint to unlock an iPhone. The court ruled that doing so would not violate the Fifth Amendment, which is designed to protect individuals from self-incrimination.

There will likely be no opposition to the use of the deceased victim's fingerprints -- either from the courts or the victim. Dead men don't talk, after all.

The real question is what this means for the privacy of the individuals whose personal details, communications, and other information might be contained on the victim's phone. Does finding his killer override the expectation of privacy for those who communicated with him? Tell us what you think in the comments section below.

Dawn Kawamoto is an Associate Editor for Dark Reading, where she covers cybersecurity news and trends. She is an award-winning journalist who has written and edited technology, management, leadership, career, finance, and innovation stories for such publications as CNET's ... View Full Bio
We welcome your comments on this topic on our social media channels, or [contact us directly] with questions about the site.
Comment  |
Email This  |
Print  |
RSS
More Insights
Webcasts
Making XDR Work in Your Enterprise - May 12
How the Rapid Shift to Remote Work Impacted IT Complexity and Post-Pandemic Security Priorities
More Webcasts
White Papers
Ransomware Defense for Dummies
2020 Digital Transformation Report
More White Papers
Reports
[Tech Insights] SASE's Pandemic Boost Likely to Stick
Enabling Enterprise Resiliency Through Cyberthreat Detection
More Reports