GE spent several years trying to effect its own digital transformation; now it's issued a playbook on how it's done.

Everybody talks about digital transformation, but GE has actually done it. Or rather, GE is still in the process of doing it. And it's put out a white paper, GE's Digital Industrial Transformation Playbook, on what the process is like.

With inexpensive sensors being placed on more industrial machines, machine-learning algorithms can gather meaningful information without constant human intervention. The GE authors said the first use case for the industrial Internet is in reducing the unplanned downtime of key industrial assets, such as electricity generators, mining equipment, windmills and other heavy equipment. But the goal is beginning to expand beyond that.

GE has been a leader in the field, putting sensors on its windmills and jet engines, and tracking their operational activity to closely match maintenance efforts to actual needs. GE has also been a pioneer in coming up with the concept of a digital twin, where an asset's digital information is compiled together with the opportunity to do test runs and what-if scenarios on its longevity.

The result, it says, is to "increase the high resolution view of the future behavior of critical assets" and also give a company the ability to obtain "a system view" of the entire enterprise operation. Such a system view can lead to business model innovation and result in "everything as a service," the authors said. The paper was written by Akanksha Manik Talya, director of GE Global Foundry strategy and operations, and Matt Mattox, VP of industrial solutions.

Want to learn more about the concept of a digital twin? See GE Doubles Down on Digital Twins for Business Knowledge.

A rapid spread of digital innovation will "reboot industrial productivity growth." Industrial firms are entering a period of "explosive value creation," they predicted. The GE authors cited a McKinsey & Company estimate that the industrial Internet of Things will create $7.5 trillion in value by 2025. The creation of that value is as inevitable as city and farm electrification was in the early 1900s, they said.

At the core of an industrial company's transition is its ability to create a digital twin out of design plans, operating data and sensor data that is collected over a period of time. Machine intelligence analyzes the data pertinent to either a machine or a process.

On top of a digital twin, or multiple digital twins, industrial managers can build a "digital thread" that links the asset's design and the data from the twin's operational model. Feeding data into the continuous digital thread allows a "virtuous loop" leading to improvements to the asset, new data-driven products and cost savings to customers. 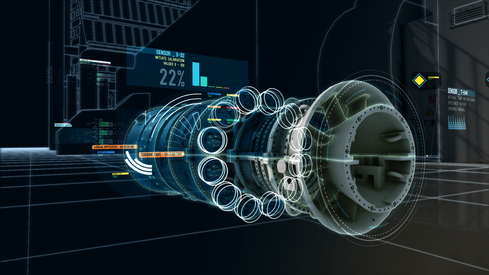 GE began to gain a holistic view of industrial asset operations and a view of the Internet of Things as a foundation technology, not just a tech trend. "The result was we moved from a defensive to an offensive market position" and GE became less focused on defending its hardware service contracts and moved instead into a growth orientation, the GE white paper said.

GE began its digital transformation with itself, leveraging its digital industrial capabilities in data collection and analytics to drive its own productivity. The transformation will affect 400 GE factories around the world. Phase two focuses on customers, where the technologies, workflows and productivity techniques that were hardened inside GE are made available to customers as packaged applications.

While GE uses its own Predix analytics system to power the transformation, it also makes Predix available to partners and customers to create their own systems. Any company in any industry may make use of it, the authors wrote.

GE has abstracted the transformation into five components.

An enterprise needs to abstract what differentiates its business, its core competencies and the tools and processes involved. Then it must decide what's needed to succeed as a world-class digital company in its field. It may also be necessary to identify capability gaps and plan on filling them. "The key is to find that elusive balance between aiming for horizontal scale and vertical specificity," the authors said.

"The connective tissue" pulling capabilities together is the Chief Digital Officer, one for each business unit, who is responsible for making the organization structure to work and who reports to the line of business leadership and GE Digital leadership, according to the white paper.

Establishing a data infrastructure for the Industrial Internet or industrialized Internet of Things is more expensive than many implementers think, the GE writers said. "Before you start building applications, you must take on tasks such as setting up the infrastructure, integrating software stacks, deploying and collecting sensor data, managing data and meta data, staffing world-class software and data science talent, building out industrial-grade IT and OT security, and defining user models." You can do all that, they suggest, or you can adopt GE's Predix, they say, perhaps not surprisingly. GE has made Predix open source code. Do-it-yourself or adopt Predix, either way the Industrial IoT calls for built in data collection and analytics.

You can't do it on your own, Talya and Mattox warn. A partner ecosystem will allow "co-innovation" with independent software vendors and developers, who didn't used to get included. Simplifying the on-boarding of new partners will help expand your ecosystem and keep it growing, they advised.

Getting the right talent may be the most important step, but it's important to realize upfront that digital transformation "requires us to think and lead differently." Part of that was rebuilding its culture around rapid decision-making, learning from failure and a willingness to compete for people in the technology space. "We had to look and feel like a fast-moving technology company," they wrote.

Your company culture must thrive on innovation. "What you sell as the vision needs to feel real to employees," they noted. Agile software development at GE combined with lean manufacturing   lead to GE FastWorks, or faster iteration in product development and a more entrepreneurial spirit. With many products needing a software component, "We needed more software DNA -- from both an engineering and commercial perspective," they wrote.

5.Business Model Innovation
GE drove the digital changes through its organization before attempting to revise its business model. Changing the business model requires operational agility as a base. Achieving digital transformation will usher in savings that can be used to finance the next step of the company's transformation and help produce new services. These efforts should find internal champions, who are recognized and help spread the transformation.

Start sharing your company's internal improvements by showing customers how they can do the same. As your firm gains credibility as an innovator in the digital economy, start modifying the business model to take full advantage of your ability to produce digital goods and services.

Charles Babcock is an editor-at-large for InformationWeek and author of Management Strategies for the Cloud Revolution, a McGraw-Hill book. He is the former editor-in-chief of Digital News, former software editor of Computerworld and former technology editor of Interactive ... View Full Bio
We welcome your comments on this topic on our social media channels, or [contact us directly] with questions about the site.
Comment  |
Email This  |
Print  |
RSS
More Insights
Webcasts
Securing and Monitoring Networks in the 'New Normal'
Making Cybersecurity Work in Small and Medium-Sized Businesses
More Webcasts
White Papers
Improving Your Enterprise's Protection With Cyber Resilience
The Essential Guide to Securing Remote Access
More White Papers
Reports
Assessing Cybersecurity Risk in Todays Enterprises
Email Security Threat Report 2020
More Reports

GE is treading a new path as it makes Predix open source and attempts to induce more of the advanced industrial world to come onto its Industrial Internet platform. It's drawn key lessons from the way open source code software works, which seems a fit for a future that will be dominated by softeware.
Reply  |  Post Message  |  Messages List  |  Start a Board
Editors' Choice
Hot Topics