At its Minds + Machines conference in Paris, GE revealed how a new suite of applications helped it restart A2A Group's Chivasso power plant in Northern Italy. GE's Digital Power Plant for Steam is one of the first application suites to sit atop GE's Predix machine data analytics platform and yield practical industrial results.

GE unveiled a machine data system for power plants it claims can increase a facility's efficiency of operation by 1.5%, reduce carbon dioxide emissions by 3%, and reduce coal consumption by 67,000 tons for each megawatt of electricity produced.

GE's Digital Power Plant for Steam suite was introduced at the Minds + Machines conference in Paris June 14, where GE executives also revealed the results of a hardware and software upgrade using the technology at the Chivasso power plant in Northern Italy. The plant, run by A2A Group, was restarted in November 2015 after a three-year shutdown.

Digital Power Plant for Steam is one of the first application suites to sit atop GE's Predix machine data analytics platform and yield practical, industrial results. The reference to "steam" in the product's name reflects the fact that gas and coal-fired power plants produce steam to drive the turbines that generate electricity used in households and industry in most societies.

[GE offers Predix for the industrial Internet, where machines will generate most of the data. To learn more, see GE Predix Cloud: Industrial Support for Machine Data.]

The Chivasso plant is one of many in Europe more than 25 years old. By using Coal Analyzer, an operator of an aging plant can tune both combustion and exhaust gas management. Doing so can reduce carbon dioxide emissions by 1%-2% and nitrous oxide emissions by 10%-15%, according to a GE statement.

A fourth application in the suite, Smart Start, concentrates on matching a plant's output to the power needs of the grid, reducing inefficiencies that consume fuel and shorten the life of equipment.

According to GE, the software can collect data from 10,000 sensors in a power plant and interpret it for streamlined operations. In addition to the other gains, doing so will result in a 5% reduction in downtime.

Power plants worldwide are motivated to meet emissions goals set forth by the Paris COP21 agreement.

A2A plans to refurbish its Cassano and Sermide power plants in Northern Italy with the GE technologies, said Valerio Camerano, CEO of the firm, in a prepared statement. The plants appear to run a mix of coal and gas-fired turbines.

Coal-fired electrical plants are the world's second largest source of energy, and are in particularly high use in developing economies, such as India, China, and Africa. The demand for electricity is expected to grow by 50% over the next 20 years, according to GE's statement.

A2A had been forced to shut down Chivasso three years ago because of its inability to be managed effectively in response to grid needs. "Thanks to GE's hardware and software solutions, we can now react more quickly to market conditions while reducing operating costs," Camerano said in the statement. GE's Operations Optimization was the app primarily responsible for the more effective running of Chivasso, he added. 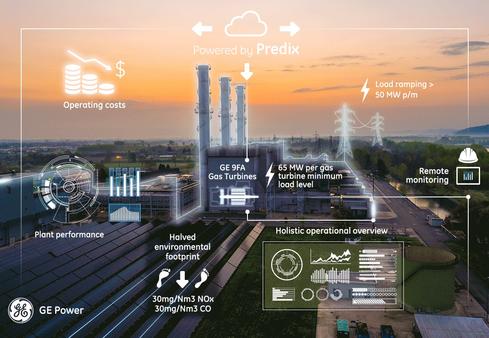 GE's relationship with the Chivasso plant goes back to 1952, when it started operating with the first GE steam turbine installed in Italy. In the upgrade, GE replaced three turbines, installed new combustion controls, and replaced its aging Alstom boilers. The latter move was aided by the fact that GE acquired Alstom in November 2015.

The upgrades, along with the GE software, "are breathing new life into power plants previously believed to be unsustainable," said Paul McElhinney, CEO of GE's Power Services business, in a prepared statement. The new technology enabled A2A to reinvent an aging asset and bring it back on line, he added. One measure of the improvement in Chivasso's efficiency was its ability to ramp up 50 megawatts per minute to meet demand, 2.5 times the normal rate.

The Chivasso story is one that could win recognition for machine learning, and Predix analytical applications using machine data.

Charles Babcock is an editor-at-large for InformationWeek and author of Management Strategies for the Cloud Revolution, a McGraw-Hill book. He is the former editor-in-chief of Digital News, former software editor of Computerworld and former technology editor of Interactive ... View Full Bio
We welcome your comments on this topic on our social media channels, or [contact us directly] with questions about the site.
Comment  |
Email This  |
Print  |
RSS
More Insights
Webcasts
Data Protection 101 - 12/10 @ 11am EST
Succeeding With Secure Access Service Edge (SASE)
More Webcasts
White Papers
Driving Immediate Value with a Cloud SIEM
Securing Our Life on the Edge
More White Papers
Reports
Evolution of Ransomware Gangs
2020 Threat Hunting Report
More Reports

The old plants need sensors and instruments, particularly on their coal fuel supply, to achieve the optimum utilization. Some of those instruments, I suspect, are still being invented.
Reply  |  Post Message  |  Messages List  |  Start a Board

The infrastructure is already in place for this power plant, it works, it just doesn't work optimally.  Enhancing older systems to perform optimally is a great use for new technologies.  Rather than trying to re-invent the wheel help smooth out the road.
Reply  |  Post Message  |  Messages List  |  Start a Board
Editors' Choice
Hot Topics