Startup uHoo begins taking orders for an IoT device that tells users via their smartphones what's in the air they breathe.

In Beijing, air quality is a matter of major concern to residents. Elsewhere in the world, pollution may not be such a visible presence, but it can still affect people's health.

Nearby, in Singapore, a startup called uHoo plans to begin taking orders from customers worldwide for an IoT device that bears its name, based on the premise that people should know more about what's in the air they breathe.

The uHoo device, a small $99 concave cylinder samples the air to detect carbon dioxide (CO2), carbon monoxide (CO), ozone, air pressure, volatile organic compounds, temperature, dust, and humidity, each through a dedicated sensor. Available for preorder on Tuesday, it communicates with a mobile app (Android or iOS) to provide data about the air in the area in real-time.

uHoo won't make the air better, but the first step toward air quality improvement is knowing whether there's a problem to begin with.

"We can help you lead a healthier life," said Dustin Jefferson Onghanseng, CEO and cofounder of uHoo, in a phone interview. "There are a lot of allergens and toxins in the air, and we just can't see it." 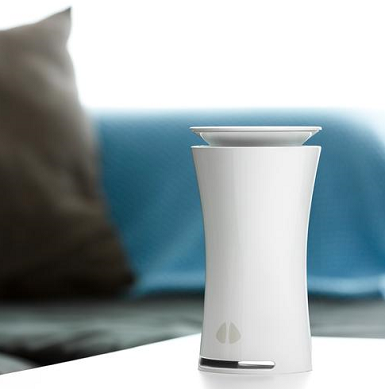 Those dealing with conditions like asthma or seasonal allergies may not need convincing that data about local air quality could be helpful. Others, untroubled by the unseen, could require evidence that monitoring what's in the air is worth the trouble.

At it happens, there is evidence to that effect. In 2014, the World Health Organization estimated that in 2012 approximately 7 million people died -- one in eight of total global deaths – as a result of air pollution exposure. The organization attributes about 4.3 million deaths that year to indoor air pollution, largely in households cooking over coal, wood, and biomass stoves.

While that sort of food preparation may be less common in industrialized nations than elsewhere, there are still plenty of potential problems with air quality in cities in the US.

The US Environmental Protection Agency estimates that we spend about 90% of our time indoors, and that 72% of toxin exposure occurs indoors, often from household cleaning products, paints, varnishes, pesticides, and similar products.

"Indoor air levels of many pollutants may be 2-5 times, and occasionally, more than 100 times higher than outdoor levels," the EPA says.

The air in offices can affect worker performance. A study published last year in Environmental Health Perspectives found that in "green" buildings, where ventilation was better and exposure to volatile organic compounds and carbon dioxide was less than "traditional" buildings, workers scored 61% higher in cognitive function testing. There have been also numerous instances of "sick buildings" related to air quality.

According to the EPA, poor indoor air quality costs tens of billions of dollars annually in lost productivity and medical care.

"When you make the air quality better, people generally can feel it," said Onghanseng.

uHoo's sensors have uses beyond health. The device also has potential to reduce utility bills for businesses. uHoo conducted a pilot test in a Singapore hotel, said Onghanseng. Based on the data, he said, "We could save the hotel $12,600 [over two days] in energy bills if they knew what to do." The savings, he said, would come from running the HVAC system in accordance with occupied areas, rather than throughout the hotel at all times.

Onghanseng said uHoo is also conducting pilot tests with hospitals in the US, India, and Thailand.