IT Burns Through The Fog Of War - InformationWeek 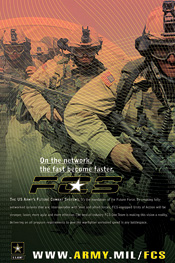 We've got eyes on, the enemy does not know squat," the officer tells his subordinates as he draws up battle plans on a hardened handheld touch screen in this video demo of the Army's forthcoming Future Combat Systems. Meanwhile, soldiers in a tank survey the scene via a heads-up virtual battlefield touch screen display.

FCS is a networked system of systems--including software and hardware for soldiers, commanders, equipment, and vehicles--that will increase the military's on-the-ground intelligence and mobility and decrease the need for personnel. Every foot soldier is connected to a secure, wireless high-speed network and can see a computerized environment on a drop-down eyepiece built into the helmet.

Smart sensors, RFID chips, and unmanned vehicles provide the data the system needs to identify and label allies in blue with information such as name and rank; enemies show in red. Materials and munitions are automatically delivered when sensors send alerts over the high-speed network. A variety of interoperating back-end applications keep everything coordinated. And when the going gets tough, armed robots can be deployed to provide cover fire and deliver equipment,

The Army estimates it will need $161 billion to turn this vision into reality. The program, an early version of which was started in the 1990s, is picking up speed, with a 7,619-square-mile test range opening last month in the New Mexico desert. But questions remain about whether it ever will be reality. The Government Accountability Office has released numerous reports criticizing the project's feasibility and costs. Information security, interoperability of systems, logistics, and cost overruns all have been raised as issues. To underscore the challenges, the Congressional Budget Office published a report in August--which the Army disputes--that analyzed the program's feasibility and affordability, concluding that pieces of it should be cut to help it meet deadlines and cut costs.

FASTER, STRONGER, DEADLIER
FCS aims to make military units faster, stronger, deadlier, and more sustainable by tracking everything that can be tracked, analyzing the data backward and forward, and interspersing it with other types of mapping and intelligence data.

"If I can say where I am, where my enemy is, and where my buddy is, I can fundamentally change the tempo of the battle," says Daniel Zanini, the FCS deputy program director and a senior VP at SAIC, one of the project's lead integrators along with Boeing. "Every soldier is a node on the network, ... sharing data, passing it to separate systems in the network."

The effort includes 18 new types of manned and unmanned vehicles and weapons systems, a stable and secure wireless network, and a host of applications designed to give commanders and fighting men alike deep insight into what's happening on the battlefield and more control over how the battles are fought. "Forces without the FCS would not have the situational awareness and joint interoperability so critical to effectiveness on today's battlefield," Claude M. Bolton Jr., assistant secretary of the Army for acquisition, logistics, and technology, told the House Armed Services Committee in March.

NETWORK IN THE MIDDLE
One of the military's primary goals is to move to a network-centric warfare model, and that's the most critical part of FCS. "The network is what ties all this together," SAIC's Zanini says. A $25 billion project called Joint Tactical Radio Systems and another effort called Warfighter Information Network-Tactical, both of which are separate from FCS, will bring all the disparate battlefield information to and from soldiers and equipment.

There are four main elements to the networked applications in FCS: a common operating environment based on the Linux operating system that includes embedded training capabilities; battle command software--with interfaces reminiscent of the game of Risk--to help plan, command, and execute missions; mobile communications and network management software; and an array of sensor-enabled applications like virtual maps to provide soldiers with real-time intelligence about themselves and the enemy.