50%
Tweet
AOL's CEO built a compelling case for the true Internet that followed. 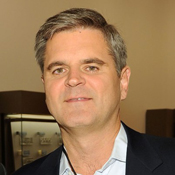 Steve Case
The book AOL.com by Kara Swisher starts with the funeral of Bill von Meister, the man who understood what an online world was before there was an online world.

Such a lovable curmudgeon was von Meister. He had the unique ability to see around corners.

I met von Meister when he ran a company called TDX, which promised cheap phone calls. He then started one of the first electronic mail companies, and sold it to Western Union. Then he started a company called The Source, which gave customers access to The New York Times' database, and he later sold it to Readers Digest. His co-investor, Jack Taub, wound up getting rid of von Meister and suing him for mismanagement. Then von Meister started a funny company called the Home Music Store, which delivered new music tapes over the FM sub-channel, avoiding the record store. (This idea cratered because Warner Music refused to play.)

Von Meister's ideas were great, but just a little bit ahead of their time. He started companies about as often as people change their socks, and he usually left behind a series of burned out investors and piles of bills as he either began another new company or pivoted the old company into a new direction. Von Meister's investors would too often forgive him his transgressions and double down on his next great idea. I know. I was one of them.

One of these companies was Control Video, which provided the GameLine modem technology for the Atari 2600, which itself was a pivot from Control Video's initial business plan to offer music on-demand. In the backroom of that company was a clever young guy named Steve Case, who was known to some of us as "lower case" because his older brother, Dan, was the supposedly brighter one, a crack investment banker who ran Hambrecht & Quist, an early San Francisco firm that bankrolled a number of hot tech companies. (Hambrecht & Quist would handle the IPO for Netscape, viewed as the starting gun for the Internet Age.)

Control Video morphed into Quantum Computer Services, and Case jumped to VP of marketing. He had experience at Pizza Hut developing pineapple pizza, which was about all the experience you needed in the pre-Internet era.

Case is the most unlikely of geniuses in our "20 People Who Changed Tech" series. When Control Video was going down for the count, seemingly unable to raise funds, it fired all but 12 employees. Steve Case was one of the 12 saved, maybe because his brother had provided $100,000 in seed capital and maybe because the CEO at the time, James Kimsey, saw something in Case.

In 1985, the new company, Quantum, launched a service called Q-Link, which let Commodore home computer users chat as well as access news, sports and games for $10 a month and $0.06 a minute. Oh, it was available only from 6 p.m. to 10 p.m. The first night, 24 users signed on. A few days later, the service crashed because ... 60 users had logged on. Truly an inauspicious start.

Quantum realized that hitching its star to just Commodore computers was too risky, so it cut a deal with Apple to sell its AppleLink online service and one with Radio Shack. Apple wanted control of its name back, so with only 75,000 subscribers, in 1991 Quantum changed its name to America Online. IBM agreed to ship the AOL service with its PCs.

Even at its beginning, AOL was fun, fun, fun. It was easy to install, had great graphics and every day offered something new. Paul Allen bought 25% of the company at its public offering, and Bill Gates made its management a Godfather offer: Either let me buy you or I will go do this myself and bury you.

By now, Case was running the show. He turned down Gates' "offer" and went for the gold. His genius was in programming. Case had a "golden gut" and knew what customers wanted before they did. Chat and email built a walled garden around people. You would get an email account just because you wanted to talk with your new friends. America Online built communities, and no one complained about the slow speed because no one knew any better. By 1993, Case had flooded the world with a quarter of a billion (!) free-trial disks. If you had stacked up all of those free-trial disks, they would have reached 500 miles into space. 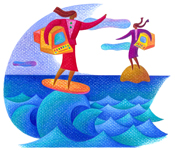 And amazingly, that strategy worked. AOL crossed the threshold of 1 million subscribers in 1994 and never looked back.

Well, yes it did. AOL's growth so outpaced its capacity that its "service" suffered. I use that word advisedly. Availability cratered to a point that the company was called "America On Hold," but its customers put up with it. AOL's publicly traded stock reached the stratosphere, and so it bought a gaggle of companies for stock and made some of the sellers billionaires (for awhile, and if they were able to sell).

Why was the stock so high? For one reason: AOL was seen as the stand-in for the Internet. There really weren't very many pure Internet plays, so those who believed in the Internet could back their insight only by buying stock in ... AOL. Microsoft Network had come onto the market, as Gates had promised, but by this time AOL was lapping the field, adding a quarter of a million users per month, almost as many as Microsoft Network had in total.

Steve Case built AOL as the online service company for computer owners who were afraid of computers. He took its online gaming heritage and built an online community around its walled garden, which at one time had 30 million members. AOL charged for its service, retreated from online gaming and by 1996 was fetching a flat $20 a month. Its free-trial discs were distributed in everything from airline seatbacks to monstrous direct mail campaigns. Most people's first email account was probably an AOL one; a whole generation of teenagers lived on Instant Messenger. AOL offered private rooms, conference rooms and a variety of information, games and connections. In the end, AOL was just fun -- exciting, interactive and very sticky.

AOL's competitors at the time were the likes of CompuServe, which was by techies for techies, and which died a slow death. AOL was different. It was a service for people interacting with other people.

By 2000, AOL was on fire, and Time Warner absolutely, positively had to have it -- so much so that the guppy swallowed the whale. AOL, with a fraction of Time Warner's revenue and profit, became the dominant partner, though Time Warner CEO Gerald Levin was named CEO.

But AOL was dial-up, which meant it was slow. How slow? s...l...o...w. It was training wheels for those who would one day demand faster and true Internet.

So I have made an executive decision: It's not steve case, it's STEVE CASE.

I don't know whose idea it was but you kind of glossed over the one thing that made AOL such a success, in my opinion. The other folks, CompuServe, Prodigy, etc. saw themselves as something they weren't. They all thought of themselves as selling software and service. AOL decided that software was a commodity but the monthly service fee was the goldmine. So they gave away the software, the others were aghast. But it worked. As you indicated AOL flooded the market with diskettes and then later CDs. Give away the software, and give everyone a free month of service and let them see how great it is. Like you said they took over, for awhile.
Reply  |  Post Message  |  Messages List  |  Start a Board
Editors' Choice
Hot Topics