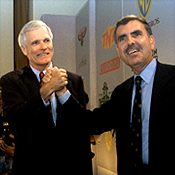 Ya gotta love Ted Turner. He gets points for:

-- Getting kicked out of Brown University for having a woman in his room. (Go, Ted!)

-- Realizing that by buying transponders on a geosynchronous satellite, he could create a Superstation. The cable industry would carry his signal of old movies, baseball games … and advertising … for free -- and in doing so would upset the balance of power in television from the Big Three networks into a free-for-all. Time magazine named Turner its Man of the Year in 1991.

-- Starting Cable News Network and the idea of news anytime, anywhere, around the world. And then starting CNN Europe, Japan, Russia, Africa and about a dozen others I can't name.

-- Offering a refund to ticket holders when his Atlanta Braves played poorly one day. The baseball empire was appalled: "Apologize? Apologize? We are the owners! We never apologize." Turner was Mark Cuban before Mark Cuban was Mark Cuban. Once, Turner got so upset with the Braves manager that he sent him on a "scouting" trip and managed the team himself. The Baseball Powers That Be weren't amused, so Turner promised to behave. (P.S.: He didn't mean it.) 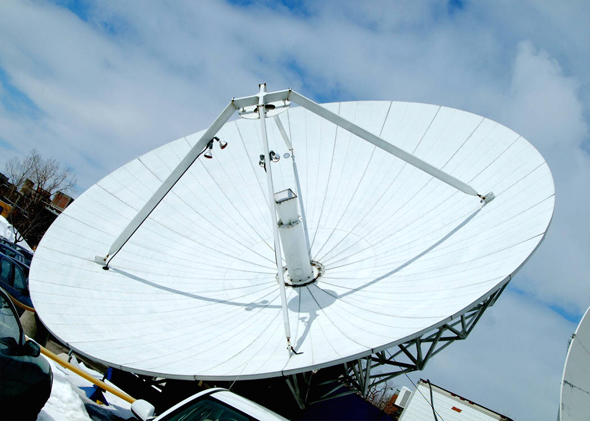 -- Founding the Good Will Games in an attempt to build his own programming while politicking for world peace. Turner realized that "sponsoring" the Olympics would mean paying higher and higher fees every four years, but by owning the Good Will Games, he could cap his costs and have the world's attention every two years when America and Russia duked it out for bragging rights as the most vigorous nation. And so he created first-rate programming, on his station and available only through your local cable company. While the Olympic Committee held the Big Networks hostage every four years, Turner figured a creative alternative. Take that, CBS, ABC, NBC!

-- Giving a $1 billion gift to the United Nations Foundation … and then keeping his pledge when his own financial stockpile went straight down. Man of his word. 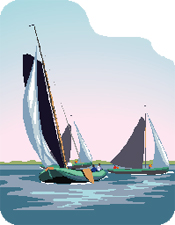 -- Winning the America's Cup, even though he often got seasick. Turner made the cover of Sports Illustrated on July 4, 1974. Along the way, Turner and Rupert Murdoch picked classic fight after classic fight with each other over everything from politics to whose boat was bigger, faster and more expensive. They had a hate/hate relationship. Turner once compared Murdoch to Adolph Hitler, and not favorably.

-- Being probably the No. 1 environmentalist in America. With more than 2 million acres, almost three times the size of Rhode Island, Turner is one of the biggest private landowners in the U.S. John Malone is No. 1, which I guess shows that size does matter.

-- Trying -- and failing -- to buy his own TV network, CBS. Turner then bought MGM's film library, then sold it, etc.

I could go on. We hear that God protects children, drunks and sailors, and Turner has been all three. But his greatest single strength is action and a slight case of dyslexia, which allowed him to see opportunity where others didn't. (Ever hear about the agnostic dyslexic insomniac? Man stayed up all night wondering if there was a Dog.)

If Turner had a flaw, it was his attention disorder. He often put his company at risk by piling debt onto debt to fund idea after idea, to the point that the cable industry had to bail him out and put him on an "allowance." John Malone's company acquired 21% of Turner's media companies and Time Warner another 19%, so Turner, for the first time, couldn't make decisions unilaterally; his new "minders" could veto the wildest of his ideas. It's not that he didn't have good ideas -- he had great ones. But before one new idea was fully operationalized, Turner was on to the next one or flying off to Cuba to plant the CNN flag next to Castro's front door.

Turner's genius was that he could pull together programming, package it, sell it, pull it apart, sell it again, fight with the FCC, win and trade some assets for an even better hand of assets. He not only looked like Rhett Butler; he was Rhett Butler. And while he was doing all this work, he would fly off every weekend and race his yachts. (Hey, Larry Ellison, want to go two out of three?) And he had the most amazing fun doing it, flying so very close to the sun.

At a certain point, Turner tacked to leeward (a nautical term, you landlubbers) and sold his companies to Time Warner, in 1995. He didn't want to sell, but better Time Warner than Rupert Murdoch. He had lots of money, but he lost the things he loved most: the action, the excitement, the leading every parade. Turner was the biggest shareholder of Time Warner, so when the stock spiked he was wealthy beyond wealth, but when it cratered, he was The Biggest Loser, seeing his stake lose $7 billion. My father used to ask me if a man with $10 billion is happier than a man with $5 billion. Remind me to ask Ted sometime.

Meantime, the other man who led the media and entertainment parade, Jerry Levin, was the man who took Turner out of his operating role at Turner Broadcasting. Turner got even when he helped Steve Case dethrone Levin, but that was in the future.

Turner was an idea guy, but was not so good at operations. Levin, who succeeded the legendary Steve Ross at Time Warner, had two loves: technology and strategy.

Levin was more than a gearhead in love with every advancement. He conceived of a plan five years before to turn Time Inc. into a media conglomerate, first by acquiring Warner (music and movies) and then by acquiring Turner. With Time's interest in cable systems and Home Box Office, he had two parts of the puzzle, and now he had two more. Levin made one serious mistake and one minor one.