Research In Motion still has strong products and a coveted enterprise position, but it must move quickly against more innovative competitors.

If ever a company were black and blue, it would be Research In Motion, but it hides its bruises well.

At its big event this month in Orlando, Fla., co-CEO Mike Lazaridis was smiling in a giddy run-up to the introduction of Microsoft CEO Steve Ballmer, Adobe CEO Shatanu Narayen, and 3D application demos that showcased RIM's recent acquisition of The Astonishing Tribe.

Ballmer was the biggest surprise, and he promptly rewarded his host by pimping Windows Phone 7. "I love Windows Phone," he belched like a rude houseguest after dinner. "But I won't talk about that today." God love him, he doesn't even know he does it.

Ballmer was there to overstate the humdrum announcement that Microsoft's Bing would be the default search engine for the BlackBerry. Unfazed by Ballmer's belch, Lazaridis continued with some crowd-pleasing tricks like running Android applications on the PlayBook, announcing that Angry Birds is coming soon (the mobile industry's new rite of passage), and then, for the grand finale, gave away a PlayBook to each of the 6,000 attendees. One day soon, it may serve them all well.

The main criticism was that BlackBerry World lacked jaw-dropping news. One week later at Google I/O, clear across the country in San Francisco, Google unleashed several new products, some of them in typical experimental form, and without apologies. In stark contrast to RIM, Google portrayed a future, albeit a lofty one, where its mobile devices sit at the center of a universe of wirelessly connected and controlled appliances and services. All Google I/O attendees got a free, unreleased Samsung Galaxy 10.1 tablet, a 4G Verizon Mi-Fi, and a Samsung Chromebook.

Now all eyes turn to Apple, which will host its Worldwide Developer Conference June 6 to 10, also in San Francisco. Don't expect any giveaways, but by the time summer hits, RIM may simply have been forgotten. Already, RIM watchers have latched onto the company's struggles:

At BlackBerry World, Lazaridis barely acknowledged these struggles, stumping instead about the company's successes--for instance, the 14 million BlackBerry smartphones sold in the first quarter of 2011, its 370,000 registered application developers, and its 250,000 instances of BlackBerry Enterprise Server (BES) installed. One CIO said he was at BlackBerry World mostly to check on his investment: After all, of the company's market woes, what does its future look like, this CIO wanted to know, especially as end users are bringing in Apple and Google-based devices in droves. 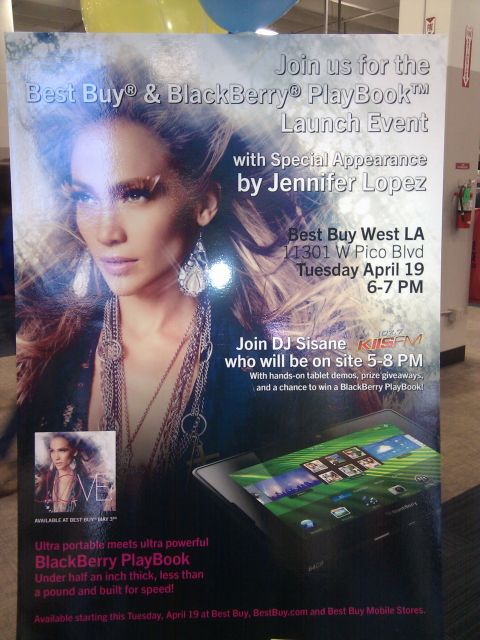 It's unclear whether CIOs will see any benefit in RIM's use of Jennifer Lopez in its PlayBook launch, even if she delivered each of them personally, so RIM had better get back to more important things, like these:

1) The Phone. Whereas every other smartphone manufacturer seems hell-bent on being a better iPhone, RIM just keeps making its addictive phones. Not everyone will like them, but the security of BES, the brilliant BlackBerry keyboard design, and now the touch interface that will find its way onto every new BlackBerry make these devices stand out.

Todd Wood, RIM's VP of industrial design, said his team makes dozens of prototype devices to get the user interaction just right. Unfortunately, it took that team until late last year to get a touch interface right with the Torch (after the forgettable Storm), and even in doing so the Torch is noticeably underpowered. At BlackBerry World, the company produced

RIM has always been the leader in mobile device management. The company claims to have hundreds of pre-built policies, and BlackBerry devices are often the only choice in places like the federal government and financial services, where security, control, and compliance are vital.

But plenty of new companies have emerged to unseat RIM as the king of mobile device management--from AirWatch to Sybase to Mobile Iron to Tangoe, and a dozen or so more, all boasting the ability to do everything from manage and control devices through to the enforcement of policies. Most of them support multiple platforms. AirWatch CEO John Marshall said that it's not just about policies, that most companies only use about 50 at a time, not hundreds; they want to set up their own app stores, even across divisions, and they want to do so using LDAP servers for authentication and self-service provisioning.

RIM saw the writing on the wall here, and purchased Ubitexx, and now says it will also offer multiplatform mobile device management, all in a single view. Just in time, but we'll have to see if this is just a duct tape job, or whether those hundreds of RIM policies will find themselves in the hands of IT professionals management Android, Apple, HP, and Microsoft devices.

3) PlayBook SDKs. End users want applications, whether those are personal or work-related, whether they are for entertainment or productivity. Without them, the tablet is worthless. Apple's gigantic lead was predicated not just on being first to market, or the mysticism of Steve Jobs and team, but because Apple did a great job of courting developers (even while making parts of the process arduous). Google is doing the same (including the arduous part).

RIM, on the other hand, has always struggled here. Its catalog of smartphone apps, while growing, is meager at best. RIM will argue--perhaps rightly so--that its catalog doesn't reflect thousands of in-house applications that corporations have built for end users. Its BlackBerry Enterprise Application Middleware (BEAM), now in beta, could help the enterprise extend existing corporate client/server applications to BlackBerry platforms. The company hasn't made any commitments about doing so for the BlackBerry PlayBook; in fact, it said the PlayBook won't support BEAM for now.

One of the things that could make the PlayBook more compelling for developers is support for a variety of programming tools, from Adobe AIR and HTML-specific SDKs (WebWorks), to the forthcoming C++ and Java SDKs. Developers (consumer and corporate) will have plenty to choose from. C++ and Java SDKs still aren't available, however, and the looming notion that BlackBerry smartphones will eventually move to QNX (which runs the PlayBook) could further complicate development choices.

Repeat after me: More BEAM, more SDKs, no fragmentation; less J-Lo. (Did I really just write that?)

Universal Minds, which develops applications for use across many platforms, said that it has had lots of success writing PlayBook apps using RIM's AIR SDK for QNX, and that the major advantage of doing so is that developers can target three devices--PlayBook, Android, and iOS--and that these applications run consistently across all devices. Company officials also said that the support for multiple SDKs means that they can take existing code libraries and quickly turn them into apps.

For the enterprise, applications are coming. Citrix will provide its "Receiver" client for the PlayBook in the second half of the year. IBM is bringing products like Lotus Connections and Symphony to the PlayBook. SAP demonstrated an analytics application, and CSC showed applications for claims adjustment and a healthcare app called Patient In Your Pocket. I've been playing around with Adobe Connect on the PlayBook, and Igloo is bringing its social enterprise software to the platform as well.

4) Android. My colleague, Andrew Binstock, editor-in-chief of Dr. Dobbs, recently said that RIM's PlayBook support for multiple languages, namely running Android apps in an emulated environment, smacks of desperation. RIM claims to have stumbled upon the finding that Java-based Android apps will run on the PlayBook (that is 88% of Android applications, according to RIM). Regardless of how it came to pass, RIM makes it sound as if the simple task of repackaging Android apps for BlackBerry App World approval is a quick, button-pushing affair, and it obviously believes it will give PlayBook users a much bigger library of apps very soon.

The company has also announced that existing BlackBerry smartphone apps will run on the PlayBook.

Note that Android and PlayBook apps will run in virtual environments. They will not be optimized for QNX, they will not take advantage of any operating system integration features. For example, some BlackBerry smartphone applications can become part of the user experience, much the same way that BlackBerry notifications (weather, Facebook updates, new Twitter messages) appear, or that Bing will become integrated into the phone experience. Emulated application environments won't get such privileges.

Despite these limitations, many will see these extra applications as a benefit.

The best RIM could do was demonstrate some of these at BlackBerry World. No word on timing yet. Better get that here soon. Sorry, but Angry Birds can wait.

5) Collaboration. Microsoft has made a bold play in acquiring Skype. Although RIM has been successful with its BlackBerry Messenger (BBM), it still only works among BlackBerry users. The same goes for the PlayBook's video chat application. Companies use technology like WebEx and Adobe Connect, Microsoft Lync, and a variety of unified communications tools from the likes of Cisco and Avaya. RIM would do well to think about opening up BBM and working with companies like Microsoft and others on a universal way to enable communication.

Virtualization can hide performance issues from traditional tools. This report provides guidelines to help you understand the hurdles that virtualization puts in front of APM, and how to get over them. Download it here. (Free with registration.)