50%
Tweet
The work is part of a company wide effort to use sensors, wireless, and GPS to track and trace equipment. One in a series of profiles of InformationWeek 500 innovators.

When the Deepwater Horizon oil rig exploded and sank last year, killing 11 people and spewing oil into the Gulf of Mexico for 87 days, BP faced one of the industry's biggest and costliest cleanup efforts ever.

In managing that cleanup, BP leveraged a wide-ranging IT initiative it had launched the previous year, under which the oil giant introduced smart tags and other supply chain and asset management technologies across its global operations. Because of that work, "when the Macondo incident did happen, we were able to respond very, very quickly," says John Baumgartner, chief of staff in BP's chief technology office.

BP calls the effort Track and Trace, and it involved deploying a web of networked sensors across key assets and field personnel. Its goal was to improve safety and compliance, and also save money--by reducing by hundreds of millions of dollars BP's asset loss and theft, employee downtime, and material waste. "The economics are quite compelling," says Baumgartner.

In the Gulf, BP introduced Wave Gliders (self-powered automatons that float around collecting data on air and water quality) and tagged skimmers and other key assets across four states so that spill responders knew what they had to work with and what shape the equipment was in.

Track and Trace relies on a wide range of sensing technologies that have been used for years in commercial applications--from RFID tags to cellular phones and GPS devices. BP's challenge was to obtain custom versions that were safe to use around oil and gas and could survive harsh conditions--from arctic chills to desert heat to Gulf humidity. For instance, BP worked with a vendor partner to develop a GPS tracking device for pipeline inspectors, who often work alone in hazardous, remote conditions. The vendor shrank its standard device by one-third, changed the emergency notification from U.S. 911 to international SOS, and shielded the device so it wouldn't emit sparks, making it safe for use around combustible materials.

Track and Trace technology also had to be practical on a huge scale--impacting operations of a company that has about 80,000 employees at thousands of facilities around the world and owns millions of pieces of field equipment, from pipelines to bulldozers. Just one aspect of the program, an effort to tag all flanges and blinds at the company's Gelsenkirchen (GSK) refinery in Germany, shows what BP was up against.

To perform routine refinery maintenance, GSK technicians must work section by section, sealing off one area before proceeding to the next. To do that they use what's called a blind to close off pipe ends at the flange. Blinds must be inserted and removed in a precise sequence. At GSK, BP tagged more than 100,000 blinds with RFID transmitters, which are then tracked by engineers with handheld readers. The data feeds into SAP and Control of Work software to automatically determine which flanges should be blinded, and when. 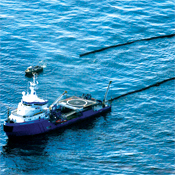 Another project under Track and Trace saw BP outfit oil trucks in Alaska with GSM-based equipment that transmits data to BP through the AT&T cellular network or, as a backup, through Iridium's satellites. The system monitors driver activity and sends alerts through email and text about a suspected accident or unsafe activity such as speeding or hard braking. Monitoring about 900 trucks, the system generates roughly 500,000 messages per week.

So what does BP do with all this data? There isn't a single location that receives and responds to all Track and Trace input. Information from the truck sensors goes to a team in Connecticut, for instance. But the company hasn't ruled out establishing a centralized, mission-control-style setup for handling all Track and Trace data.

BP also is in the early stages of developing or acquiring software to help managers extract insight from all that data pouring in. "The next step is, how do you take all that data and help people make decisions?" says Baumgartner. "It's early in the road map, but it's something we might be doing next."

We welcome your comments on this topic on our social media channels, or [contact us directly] with questions about the site.
Comment  |
Email This  |
Print  |
RSS
More Insights
Webcasts
Cloud Security Threats Enterprises Need to Watch
Building an Incident Readiness and Response Playbook
More Webcasts
White Papers
NetFlow vs Packet Data
Definitive Guide to Securing DevOps
More White Papers
Reports
Can You Spare 10-12 Mins to Help Us Out with a Survey on Tech Trends?
Got 7 Minutes? Dark Reading Needs Your Help With Our Survey on Incident Response
More Reports