How UPMC Plays To Win In Healthcare IT - InformationWeek

UPMC, the No. 1 company in the IW 500 ranking, expects tech to improve patient heath, cut operating costs and also be a revenue source.

Information technology has two broad roles at UPMC. First, it must improve the operations of the company's hospitals and health insurance plan, improve the care of patients, and drive down the company's costs. Second, technology should make money for UPMC -- it's not just a cost center.

At most companies, that second goal is a nice-to-have if things work out that way. But under the leadership of CIO Dan Drawbaugh, UPMC is explicit that its IT organization will develop unique technologies that it can sell to other healthcare providers and insurers.

A clear example of the two roles coming together occurred in March, when electronic health records vendor Allscripts acquired dbMotion, which makes software that helps healthcare providers share medical information across software platforms. UPMC was the largest shareholder in dbMotion; it bought a stake in the company in 2006 and then helped develop the software for its own and others' use. UPMC's take from the Allscripts acquisition: $67.8 million, on an original investment of $30.5 million.

UPMC (formerly University of Pittsburgh Medical Center) is one of the country's largest integrated healthcare companies, a nonprofit with fiscal year 2013 revenue of more than $10 billion. It operates more than 20 hospitals and 400 physician offices and outpatient sites in Pennsylvania, and it's also one of the state's largest health insurance plans with more than 2.1 million members. In its role as both provider and payer, it takes an aggressive approach to implementing and developing technology to make healthcare more effective and efficient. For its track record of executing on that IT strategy, InformationWeek chose UPMC as the No. 1 company in this year's InformationWeek 500 ranking.

A Haven For New Development

Observers can see UPMC's technology ambitions in action at its Technology Development Center, a tech incubator/lab located in a hip area of Pittsburgh. (TDC is housed in the same renovated bakery building as Google's Pittsburgh office. Look for the yellow, red and blue picnic umbrellas on the roof.)

There, about 120 employees -- it plans to hire 80 more over the next two years -- search for the next dbMotion. "Everything we do here is done with an eye to bringing a product to market," says TDC president Rebecca Kaul.

UPMC's model is to first try to use off-the- shelf technology to meet the needs of its clinicians, insurance teams and other business groups. It uses EHR systems from Cerner and Epic, for example. But if it can't quite find the technology it needs, TDC will look to develop it, often in a joint venture with a large vendor or by taking a stake in a startup, in which case UPMC can influence development.

For example, TDC is developing a telemedicine platform called Virtual Care Collaboration. By combining videoconferencing with medical records, UPMC is hoping it can kick-start the much-discussed but little-used practice of telemedicine. For UPMC, that initiative could add revenue if more rural Pennsylvania residents -- people who wouldn't have braved the congested bridges and tunnels around downtown Pittsburgh for an in-person visit -- use UPMC specialists for video consults.

The pieces of the browser-based VCC system aren't unique, but TDC thinks it can bring them together in a unique way. VCC so far is used in two UPMC hospitals and several of its clinics.

The big obstacle to telemedicine isn't the technology, Kaul says. It's the business model. Health insurance plans often won't pay for telemedicine consultations, and licensing rules can prevent doctors from treating patients across state lines. But UPMC Health Plan and some other insurers are starting to cover telemedicine appointments. 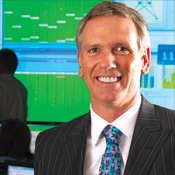 Drawbaugh wants IT as a revenue generator

As for UPMC's business model for VCC, Kaul is undecided. Is this a technology platform it should sell? Or is VCC part of a telemedicine service that lets UPMC sell its clinical services to new markets?

Cloud software and infrastructure aren't very popular in healthcare because they require patient data to leave the healthcare provider's own data center. But having done the math, UPMC CIO Drawbaugh is pretty sure that providers have to get over their cloud fears.

UPMC has about 5 PB of data today, and that volume is doubling every 18 months. So in about three years, it will have 20 PB of data, including medical images, genomic data and remote patient monitoring data. Drawbaugh doubts that UPMC can afford to build enough conventional data center capacity to cope with that data. "My gut is we have to partner," he says.

Partnering means UPMC buying infrastructure-as-a-service from vendors such as Amazon Web Services, Hewlett-Packard, IBM or Oracle so it doesn't have to spend tens of millions of capital dollars on data centers. Any of those vendors can provide the underlying hardware, Drawbaugh says. "Then you look at the value add."

That's when UPMC's entrepreneurial IT tendencies kick in. Can UPMC help one of those IaaS vendors build a cloud infrastructure tuned to the needs of healthcare providers and insurers? Drawbaugh's on the case.

It's very rare to see an IT organization so committed to commercializing the ideas that result from meeting the company's internal needs. Most see tech development as outside their core competency and not a big enough opportunity to pursue. And for most companies, that's probably right.
Reply  |  Post Message  |  Messages List  |  Start a Board

Analytics is an up-and-coming area at UPMC. They're starting to look at genomics and electronic medical records, for instance, to ensure personalized care. This is huge in areas such as breast cancer, where some cancers respond to chemo and some don't depending on the genetic makeup of the cancer and the patient. You obviously don't want chemo treatments unless you know it's going to do you some good.
Reply  |  Post Message  |  Messages List  |  Start a Board

InformationWeek has followed the truly innovative IT work of UPMC and its CIO, Dan Drawbaugh, for many years. First-class operation and first-class guy.
Reply  |  Post Message  |  Messages List  |  Start a Board
InformationWeek Is Getting an Upgrade!