HP To Oracle: The Gloves Are Off - InformationWeek

50%
Tweet
The two companies' feud over Itanium is coming to a head with an HP lawsuit. Customers can only watch in disgust.

It has all the makings of a bad episode of Desperate Housewives. Once best pals Oracle and HP have elevated their backyard spat over Itanium support to an all-out, in-the-street catfight.

HP today filed suit in Santa Clara Superior Court seeking damages and other remedies from Oracle for what it claims is a "failure to live up to a clear and simple promise to work with HP in the interests of both companies' mutual customers." The heavily redacted document spells out at length the once tight relationship between the two companies that eroded into acrimony since Oracle's statement in March that Itanium is all but dead and that it would no longer develop for the chip and for HP systems based on it.

The Desperate Housewives story line is made richer by the fact that former HP CEO Mark Hurd, ousted by the board almost a year ago, was swept into the arms of Oracle chief Larry Ellison, who reportedly thought Hurd had been mistreated. But the blood started to turn bad well before the Hurd saga, when Oracle acquired Sun Microsystems in April 2009, moving Oracle from a platform-agnostic player to one with a vested interest in its own hardware systems.

HP signaled its intention to sue Oracle days ago, telling anyone who would listen that it had sent a letter to Oracle spelling out its position. Oracle, no stranger to the courts, has a legal machine so well oiled that InformationWeek received its initial response to HP's suit even before HP had provided us with a copy of its complaint.

In that press release, Oracle claims that HP knew all about Intel's alleged plan to kill Itanium well before Oracle said it would be pulling support. That's a claim Oracle says it can back up in court and is a primary reason it's discontinuing its support for HP's Integrity Itanium servers. For its part, Intel denies it has any intent to end Itanium development, pointing to a new chip, codenamed Poulson, that sports an updated architecture Intel says will take the chip well into 2015. 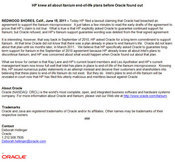 Oracle Press Release
Oracle has gone beyond simply saying it won't develop new versions of its software for Itanium. HP alleges that Oracle pushed what would normally be bug fixes in current versions of the software into new versions, thus forcing the migration issue for customers long before they'd otherwise need to decide to move off existing hardware or adopt new versions of Oracle's software. And when they do make that decision, Oracle is reportedly offering big discounts. If those tactics are proved true, it's hard to see how Oracle can claim to have the best interests of anyone but itself and its shareholders at heart. If such is the case, Oracle would be poisoning the water for HP sales, and it'll be up to the courts to figure out whether it did so legally.

In its statement, Oracle says HP asked it for long-term commitments to Itanium as far back as September 2010, and it claims that at the time HP had known about end-of-life plans for Itanium. What Oracle doesn't say is how it knows all this. The wording of Oracle's statement is interesting in that it insists there's a plan to kill Itanium, but seems careful not to say that HP and Intel had actually agreed to put the plan into action. 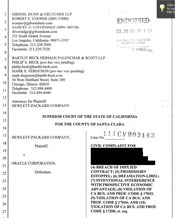 HP Complaint Filed Against Oracle
(click image to download PDF)
It would certainly be reasonable for Intel to have any number of contingency plans for its products. The company could simply be trying to understand the risks and benefits of investing in or sun-setting the product. So the existence of such a plan would hardly imply intent.

One can find merits and believability on both sides of the dispute. If HP and Intel really did or do have plans to end Itanium's life, they'd be as tight lipped as possible right up until they had a solid plan for migrating those Itanium/Integrity customers. The issue isn't so much about having other viable hardware platforms; this and next-generation Xeon chips will perform on a par with Itanium. The issue is supporting customers that want to continue to use the HP-UX and VMS operating systems, which HP still supports on Itanium. Those customers now find themselves in a position to doubt HP and its stated plans for what is a shrinking market. In that sense, Oracle has done its damage, and probably done so in a way that HP can't rectify. Customers will simply look at this catfight and wisely decide to do anything they can to get out of the way of it.

On the other hand, it's downright laughable that Oracle would claim to have only the best interests of HP's customers at heart. This is a play for those customers in a pure, plain, and ugly way. Oracle is making those customers face a hard choice to move to a hardware platform they probably don't want far sooner than those customers would normally want to make that decision. It's the bare knuckles business Oracle is known for. For the vast majority of those customers, the choice isn't going to be to jump to Solaris on Sun hardware. It's a chance to simplify their operations, move to all Xeon-based hardware, or if Unix is a critical component, strongly consider IBM or another Unix player.

Oracle's stance on entry-level and midrange Unix systems hasn't been clear, and indeed the future of those systems should be questioned at least as much as the future of Itanium. Itanium systems are at least profitable for HP.

The bottom line is that there won't be a winner here -- except, possibly, HP, should it choose to take its lawsuit all the way and get awarded lost income from all this disruption. Customers will have to move before they wanted to; they'll have to buy new systems before they'd budgeted for them; and the ill will all that generates will most likely be aimed at Oracle. Oracle, then, will lose some customers for its hardware and software; HP will end up with a hole in its offerings, at least for a while; and both companies will suffer after enjoying a tight relationship that had brought them billions of dollars in business.

Art Wittmann is director of InformationWeek Analytics, a portfolio of decision-support tools and analyst reports. You can write to him at [email protected].

To find out more about Art Wittmann, please visit his page.

More than 100 major reports will be released this year. Sign up or upgrade your InformationWeek Analytics membership.

The Optimized Enterprise, a unique virtual event, will feature presentations and discussions on the key topics related to creating a more competitive and efficient financial services organization. It happens June 23. Register now.