Union Pacific, the nation's largest railroad company, is a choice place to assess the gap between the dream and the reality of what's commonly called the "Internet of things." Like a lot of technology movements, the Internet of things is easy to describe but hard to execute. It means putting sensors on all manner of machines to collect data, linking them over wired and wireless networks, and then applying data analytics to assess when a train's wheel needs replacing, a power plant needs fixing, a soybean field needs watering, or a patient needs reviving.

Union Pacific and other companies are doing some of that kind of analytics today. Companies that succeed in the future will have to do much more of it, so it's critical to know the barriers and constraints--which brings us to Union Pacific headquarters in Omaha, Neb.

UP has been in the same business for 150 years, hauling railcars full of coal, grain, manufactured goods, and people across the plains and mountains of the Western U.S. To run the railroad of the future, it's putting more emphasis on a new skill: predicting the future.

[Union Pacific CIO Lynden Tennison is among the IT leaders speaking at the InformationWeek 500 conference. Register to attend Sept. 10. ]

For example, UP would like to be able to predict when a wheel is going to fail weeks before it causes a 1.5-mile-long, 20,000-ton coal train running at 70 miles per hour to derail, risking lives, causing delays, and losing the company money. UP has been using technology to predict and prevent derailments for well over a decade. It has placed infrared sensors every 20 miles on its tracks to take about 20 million temperature readings of train wheels a day to look for overheating, a sign of impending failure. It has trackside microphones to listen for growling bearings in the wheels. For its biggest and heaviest coal trains, it even shoots ultrasound images--like those used to see a fetus in the womb--to look for flaws inside wheels. 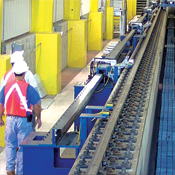 Data is sent via fiber-optic cables that run alongside UP's tracks back to its Omaha-area data centers. There, complex pattern-matching algorithms flag the outliers, letting experts decide within five minutes of taking a reading whether a driver should pull a train off the track for inspection, or perhaps just slow it from 70 to 35 mph until it can be repaired at the next station. Using all of these technologies, UP has cut bearing-related derailments by 75%.

But the railroad isn't content. Slowing a train to half speed slows the entire network, since the trains behind it on the tracks must slow as well. Stopping a train at a station midroute is a lot better than stopping it out on the track, or having a derailment, but it still bungs up the network.

CIO Lynden Tennison would love to someday get rid of all of those wayside sensors and instead put tiny sensors, called motes, directly on the wheels, bearings, door locks, and more, and collect the data wirelessly. That way, UP could predict weeks out when most repairs are needed and do them when a train is between deliveries and at a major hub. But there's a long list of obstacles to achieving this dream network:

Wireless coverage isn't everywhere. Sensors are too expensive. Unlimited data can't be instantly analyzed, even by today's computers. Algorithms can't replace human judgment. Location data is incomplete. Batteries are too short-lived. "Those are all things that will come," Tennison says.

Until then, he and his team of 2,000 IT pros keep pushing today's technology to make UP a smarter railroad, testing the limits of the Internet of things as they go.