But worries continue about offshoring of tech jobs and innovation, state of STEM education.

Two years ago, under the moniker Innovation Mandate, InformationWeek fielded a survey and conducted scores of interviews to gauge whether U.S. IT pros and the industry at large think this country is declining as a global technology leader--and if so, what we can do about it. When asked to describe where the U.S. stands in the global IT industry, 63% of the 624 business technology pros who responded to that 2010 survey characterized the U.S. as "a strong player, but losing its lead on a global scale," while 5% saw the U.S. as "a former leader whose best days are behind it." Only 32% of respondents still saw the U.S. IT industry as "a global leader positioned to grow its influence."

How have views changed in two years? We fielded an updated survey in April (download our full, updated Innovation Mandate report), and the results are in: IT pros are slightly more optimistic about the state of U.S. technology leadership, though their opinions about the most pressing priorities and competitive threats, as well as which IT vendors and nations are taking the mantle of leadership and which are falling behind, have shifted a bit in two years.

Responding to our latest survey were 552 business technology pros at a range of U.S. companies, educational institutions, and government organizations. The same percentage as in 2010--63%--think the U.S. is a strong IT player but losing its global lead. The percentage who are more optimistic--who think it's a global leader positioned to grow its influence--rose slightly, to 34% from 32%. Only 3% of respondents think the U.S. is a former IT leader, compared with 5% two years ago.

As for the main factors preventing the U.S. from growing as a global IT leader, the results of the recent survey are pretty consistent with those from 2010. Still topping the list of concerns is "shortsighted decisions that are shipping tech jobs and ultimately innovation abroad," selected as one of the most important three factors by 67% of the 362 survey respondents who think the U.S. is a former technology leader or is losing its lead, compared with 66% two years ago. Likewise, the No. 2 and No. 3 factors thought to be limiting U.S. technology leadership are the same in the 2012 survey as in 2010: "failure of the educational system to produce workers who excel in STEM" and "lack of leadership at the federal policy-making level" (see chart below).

The biggest shifts since 2010 have to do with intellectual property and perceptions about U.S. IT worker productivity and ambition. In the 2010 survey, only 18% of respondents cited "failure to protect intellectual property developed in the U.S." as one of the top three factors holding back the U.S. IT industry. But that percentage jumped to 28% this year, as more technology R&D and design work gets farmed out to companies in other countries, or as news surfaces that foreign companies and governments are trying to steal that U.S. IP. Meantime, 21% of the IT pros we surveyed in 2010 worried about "a corporate culture where tech workers no longer are 'hungry' enough to out-innovate counterparts based abroad," but only 15% see that as a top concern today. 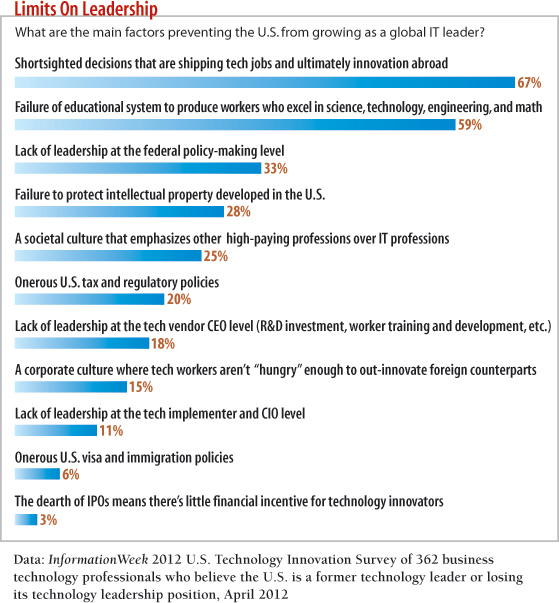 Our Innovation Mandate report, packed with 20 charts, is free with registration.

Vendors on the steepest decline - RIM (Maybe BB10 will fix that, but I wouldn't bet the ranch on it and I don't see them making a dent in the iOS vs. Android wars), HP (muddled confusion about which direction the company is going in, spending millions to acquire Palm and produce a line of products that it scuttles less than a week after launch)...

As to Apple soaring - is that because the iPad 3 came with the nifty hand warmer function?

Which makes another opinion poll result published by Dell/Intel (Mr. Matt Stansberry) all the more disconcerting, "Technical certifications continue to lose merit with respondents: 55% don't have any certification, versus 46% last year. The number of respondents who say certification doesn't matter in their raise or bonus structure increased from 77% last year to practically 90%." The again, what's the old adage about opinions? Not surprisingly, the basis of the survey (market sector, no. of respondents, etc.) was not specified in the paper. Point is in numbers, it is always important to separate statistical data from opinion data and consider the composition or base of either.
Reply  |  Post Message  |  Messages List  |  Start a Board

I think that it is normal for a potential employer to have the perspective employee sign a contract, and most contracts contain a portion about intellectual property and how the company owns any ideas you come up with while working there. I would also agree that the group that voted the government should support basic an applied research at the college level. I believe that University research should be supported, simple case and point, the internet. This was a part of Advanced Research Projects Agency (ARPA) or aka ARPANET; this was the communication between 4 different universities, Stanford, UCLA, USCB, and University of Colorado. Just a quick example of technology that the Government supported and was successful with great results.
The IT field is highly competitive and if you are not willing to keep up with the current trends than you will become a dinosaur in the IT field. It is a large part of the IT professional to keep up to date with technology regardless of whether or not their country is a global IT leader.
Not surprising that we are number one in the social networking category!
Paul Sprague
InformationWeek Contributor
Reply  |  Post Message  |  Messages List  |  Start a Board
Editors' Choice
Hot Topics