50%
Tweet
Work-life balance is a myth, risk-taking is vital and other lessons women (and men) must learn.

"Risk is the key element around planning successful careers," said Wal-Mart CIO Karenann Terrell. Thus began one of the most candid, practical career-advice discussions you'll ever hear for women in the IT field and the executives responsible for developing and retaining that talent.

The panel was the highlight of an event on Monday organized by the Michigan Council for Women in Technology. It was sponsored by Detroit's Big Three automakers, General Motors, Ford and Chrysler, and featured a discussion with the CIOs of those three companies. I served as emcee of the event.

Given what these leaders have achieved, their career moves don't look very risky. If you end up as the CIO of Wal-Mart or Boeing, your choices look pretty smart in retrospect.

But these leaders shared how their journeys came with moments of deep doubt about whether they had made a disastrous move or even gotten in over their heads. "Those moments, driving in your car and thinking 'What have I really done?'-- I've had those moments," Boeing's Hammonds said.

Jordan recalled nine months after leaving Disney for Cisco, how she came out of a marketing meeting so overwhelmed by the new industry jargon that she thought, "Oh my gosh, they don't speak English. What are they talking about? I used to be smart." She urged the 500 or so attendees, at least two-thirds of them women, to "be patient with yourself" and to trust that you'll learn your new environment just like you did your last one.

Van Kralingen, who leads IBM's 100,000-strong consulting army, urged the audience members to "make sure you go for the hard jobs," such as those with revenue and profit responsibility and front-line management involving customers. 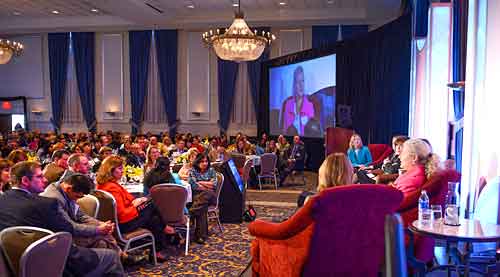 While the career advice messages were aimed at women, I found plenty in here for men as well -- and for any business leader to use in thinking about how to recruit, develop and retain tech talent. Here are some highlights:

Work-life balance "is a myth created to make us feel a bit guilty," Jordan said. It's unrealistic. Has any parent of a 2-year-old and a 4-year-old felt in balance every day, whether they're working or not? So Jordan strives for work-life integration, blending work as part of her life so there isn't a sense that working is depriving a personal life. All the panelists embraced this idea of integration rather than balance.

If a manager or executive works in a client-facing, high-intensity role, there will be "weeks or months" where work dominates your time, van Kralingen said. "None of us is going to push back that tide," she said, so you must carve out time for what's important. Flexibility means you might not be home by 7 every night, but it's perfectly OK to leave in the middle of the day for a child's preschool music concert.

Said Hammonds: "It's all about blending, and it's about getting peaceful with that blending."

It's OK to give up what you're great at. Too often, women stay in roles where they've thrived instead of taking a risk on a role where they're no longer the expert. Van Kralingen trained as a psychologist, so she faced this fear when she was asked to move from doing organizational development to managing large-scale reengineering and cost-reduction consulting jobs. "When you get really good at something, it's hard to give it up," she said. "... What I've seen in many women's careers is they hang onto something too long in order to be expert." IBM addresses this by pushing people to do what it calls "lily-padding" -- moving people to a lateral area outside their expertise.

Women might need a push forward. "Women have networks and very, very often have mentors," Terrell said. "They need sponsors." She didn't stop there, challenging business leaders to take action: "Do you have a woman, whether you're a man or woman, you actively advocate and sponsor for?"

Boeing's Hammond said that for women and men, sometimes it takes a "double promotion" to move them through the talent pipeline to a challenging position for which they might not have all the career-track boxes checked. "We take risks on people," Hammond said.

Take credit for what you do. "There's a strange dynamic of credit deflection that takes place with women," Terrell said. Even when she asks women directly about their contributions to a project or other initiative, they'll default to discussing the team. "There's a feeling of dirtiness that exists with women about taking credit even when directly asked about it," she said.

That deflection can lead managers to conclude that maybe those women didn't do more than facilitate. Terrell suggests the following tactic: Ask your people to fill in the blank: I'm really proud of _______.