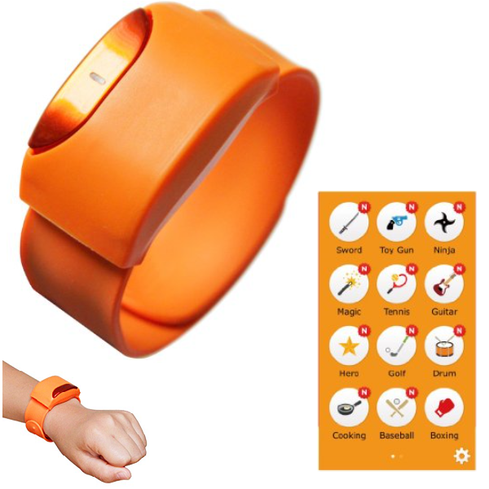 Moff Band
Finally, a wearable for kids! OK, maybe parents haven't exactly been clamoring for a wristband gizmo for their tech-savvy progeny, but the clever Moff Band ($55) may change that. When worn on the wrist, the Moff Band senses motion and adds sound effects to playtime activities. The companion iOS app includes a variety of sounds, such as "Ninja," "Magic," and "Boxing," which it plays from the speaker of an iPhone or iPad. (Android support is coming, the company says.) A single iPhone/iPad supports two Moff devices, thereby allowing Moff-wearing kids to interact by adding sound effects to a mock sword battle, for instance.

The Ozobot seems like a neat toy for curious kids (at a reasonable price). Does anyone have experience with it? What kind of coding does it actually teach?
Reply  |  Post Message  |  Messages List  |  Start a Board

I would say the Leap Pad is better suited for 2 to 4 year olds. They have it listed as 3 to 9 year olds. That's a stretch! The robots look interesting, the prices are very high though. I think the kids will love the drone with the camera.
Reply  |  Post Message  |  Messages List  |  Start a Board

Plenty of kids did without a leapfrog and survived, yes. Thanks for chiming in here, readers.
Reply  |  Post Message  |  Messages List  |  Start a Board

Some of these, like the helicopter and the speaker are fine and cool gifts in their way. To be honest,  though, I consider most of the toys on this list to be a mixed bag (or worse). On the one hand, we have devices that seem too one-off for their pricetag - for 350 you'd be better of shelling out a little more and getting the child a brand-new PC than some lego robots, and don't get me started on that 'smart' watch - and on the other hand you have gimmicky stuff that, as Chris says, seems like it won't really get kids into STEM while boring them at the same time. The orb robot is cool in theory, but I wonder how much mileage you can really get out of it, and again, you have no idea what the interface and functionality is like until you get the box open and it's already too late.

For me, nothing says it better than the Leapfrog VS Amazon Fire shown here. You can get a child something chintzy that they'll likely hate (leapfrog was the stamp of crap even when I was young enough to be excited about things in Toys R Us) for a hundred dollars (what a steal!) because it's 'educational', or for just fifty more you can get them something top of the line, that will continue to teach and inspire (not to mention be useful to) them for years to come.  Chris & others have the right idea - if you have a child that's really into tech stuff for their age, don't be afraid to get them the serious stuff, and if you don't... don't force it.
Reply  |  Post Message  |  Messages List  |  Start a Board

"I thought the basic reason was to be out of money. Who knew?" LOL @Mak63. I believe you're right. If they just run out of ideas, they can give cash or its inferior substitute, a giftcard.
Reply  |  Post Message  |  Messages List  |  Start a Board

If the tablet breaks within two years, Amazon will replace it for free -- no questions asked.

I'm glad some companies here are caching up to the European counterparts; where 2 years warranty is the norm.

half of gift givers find it hard to buy presents for a very basic reason: they run out of ideas.

I thought the basic reason was to be out of money. Who knew?

I really like the Sky Viper Camera Drone, not for a kid, but for me. Looks neat and affordable.
Reply  |  Post Message  |  Messages List  |  Start a Board

I think the sooner we get kids to get into robotics the better.  Since robots will be managing all of manufacturing in the future.  The toys that I liked the most are the tablets.  Ipads really take a pounding by kids.  Amazon new tablet is great, if it breaks, you get a free one. Next time, computer companies realease a new tablet, give it to a bunch of kids for a month, if it doesn't break, it good to go into the market.
Reply  |  Post Message  |  Messages List  |  Start a Board

It's worth noting that Raspberry Pi is not open source hardware, due to its reliance on a Broadcom ARM processor.
Reply  |  Post Message  |  Messages List  |  Start a Board

I think it would be a good gift for a kid interested in robotics. There are plenty of interesting arduino projects for robot enthusiasts (http://www.adafruit.com/blog/2012/12/17/new-product-make-lego-and-arduino-projects/).
Reply  |  Post Message  |  Messages List  |  Start a Board

Arduino, and it's many variants, are good at interfacing with hardware (sensors, LEDs, small motors, etc.). While a Raspberry Pi is good for teaching the software side of things and has limited hardware connections. They can actually be made to work together with just a USB cable connecting them.

There are some downsides to each. For Arduino there's a slew of other components that are needed to accomplish any project, the most important being a breadboard otherwise everything would need soldering. Arduino is fairly open to canibalizing whatever AC adapter you have laying around though. Raspberry Pi doesn't cost much, but the things that are required (monitor, keyboard, mouse, AC adapter, SD card) quickly add up unless you've got an old computer you're not using and the SD card will need a bit of work to get the Pi OS on to it.

Raspberry Pi has the Python programming language running on it which is very easy to use though a bit slow. While Arduino uses a subset of C/C++ which is less readable but a core language for future programming.