Guess who's coming to dinner. Do robots need their own place settings?

Thanksgiving dinner works best as an intimate affair. It's a time to be around friends and family, if you're lucky enough to have them.

But as a thought experiment, let's imagine everyone in the technology community eagerly awaiting an invitation to your Thanksgiving table, for intriguing conversation, great food, and impromptu soldering. Call it Techsgiving. Whom would you invite to share the evening?

There are two rules.

First, your guests must be living. Of course, we all want to see Nikola Tesla toast a turkey with a Tesla coil, but your living guests probably won't appreciate corpses as dinner companions. What's more, the dead won't enjoy your cooking.

Second, you must try to invite both men and women, with some thought to diversity. Too many technology events tend toward the pale and male, at least in the Bay Area. The guest list needn't be a rainbow coalition that covers every culture and ethnicity, but it should be more inclusive than Apple's 2012 executive team. The goal is to assemble a group of varied people doing interesting things who'd contribute to lively conversation, to the evening's cuisine, and to fixing the appliances if any should break down.

[Can you cook your turkey with heat from servers? Read Heating Your House With Cloud Computing.]

My list begins with Mark Zuckerberg, founder and CEO of Facebook. In 2011, Zuckerberg challenged himself to eat only meat from animals he'd killed. Having dispatched a pig and a goat, I feel reasonably sure he could terminate a turkey. Zuckerberg is also ideally suited to handle the Facebook invitations. With any luck, he'd do something embarrassing and we could capture it all on video, in order to help him understand that some things shouldn't be shared and that privacy matters. 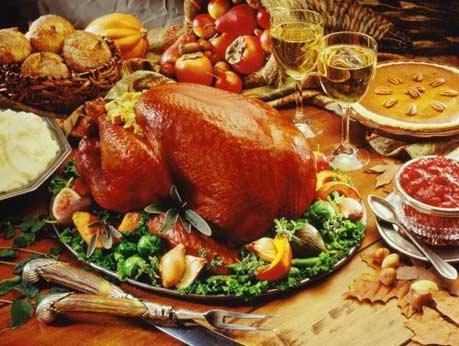 Yahoo CEO Marissa Mayer would receive an invitation. An engineer by training, she's sharp and amiable -- at least she was when I interviewed her in 2011. I'd keep a Rubik's Cube ready for her in case she decided to offer any helpful suggestions about running the event more efficiently -- her focus on design at Google and her willingness to shake things up at Yahoo tells me she has definite opinions and the will to implement them. You want to keep people like that busy, or you find yourself out of a job (at least you'd have your golden parachute). Given Mayer's willingness to end telecommuting for Yahoo employees, I could ask her to take on the task of ensuring that invited guests actually show up.

Next up, Tim Cook, Apple's CEO. Cook's mastery of logistics would be indispensable for assembling the evening's guests. Chances are the meal would arrive on-time, on-budget, and looking great under his supervision. The primary downside would be his schedule. Said to awaken around 3:30 or 4:00 a.m. daily, Cook might find it challenging to remain engaged as the revelry went into the night. But The Wall Street Journal claims his stamina is "inhuman." So who knows? Maybe he'd drink us all under the table. In any event, plying him with wine would probably be the only way to get him to stop speaking in superlatives like "amazing" and "incredible." Either that, or hand him an Android phone.

Of course I'd invite Laurie Anderson. While not an engineer, Anderson has a long history of using technology for performance art. Her violin bow that used magnetic audio tape in place of horsehair was a hack of genius. "Technology is the campfire around which we tell our stories," Anderson once said. And I can't think of a better storyteller.

I'd invite William Kamkwamba, from Malawi. In 2002, after dropping out of school as a teenager for lack of funds, Kamkwamba built a windmill to generate electricity from scrap parts by teaching himself using two science books. The windmill provided light for his dorm, and its success led to donations so he could build another windmill to power lights for the home of his parents. "When I was making all these, some people were mocking me that I was going mad, but I had confidence in what I was doing because I knew if it was written in the books then it was true and possible," Kamkwamba told Malawi's Daily Times in 2006. That's a hacker; that's someone using technology to make meaningful change. (It's also the archetypal "they laughed at me at the academy" speech that supervillains use to explain their motivation for conquering the world.) In any event, the next time you read a story about an Internet-connected fork or a social network for dogs, check Kamkwamba's blog to see what a real technologist is doing.

Neuroscientist Molly Crockett heads the Crockett Lab in the department of experimental psychology at the University of Oxford. Remember tryptophan, the amino acid in turkey (and other foods) that's dubiously associated with post-Thanksgiving exhaustion? Well, Crockett has studied it. She's the co-author of papers such as "Effects of acute tryptophan depletion on prefrontal-amygdala connectivity while viewing facial signals of aggression." She did an experiment that reduced people's tryptophan levels and found that it reduced their mood-sustaining serotonin. The experiment showed that low levels of tryptophan increased people's likelihood of taking revenge when they believed they were being treated unfairly. Somehow, I feel this would encourage my guests to eat lots of turkey, to keep things civil.

Even though Julian Assange might benefit more from some time out on the town -- the Ecuadorian Embassy is a nice prison, but a prison nonetheless -- Edward Snowden seems like he'd be better dinner company. Thanksgiving dinner in Russia just isn't going to be that much fun. However, Snowden's habit of asking people to store their cellphones in the refrigerator might present a problem given how full it tends to be at Thanksgiving. You wouldn't want someone fetching food from the fridge to jostle the cranberry sauce, causing it to drop on Tim Cook's iPhone 6 Plus and voiding the warranty. Then you'd have Cook interrogating Snowden about the source of the leak, and that just wouldn't go well.

Regina Dugan,VP of engineering at Google's Advanced Technology and Projects group, is a mechanical engineer and former head of the Defense Advanced Research Projects Agency. Chances are she'd have plenty to talk about with Snowden, like the military robots at companies Google has acquired and whether any ties remain between Google and the NSA. Of course as a seasoned politician, she'd say none of it. But I'd be sure to ask her to talk about Project Tango.

Next on the guest list, Sir Tim Berners-Lee, inventor of the World Wide Web. It's always nice to have a nobleman around to class things up. Having both Berners-Lee and Crockett at the same table would mean a double dose of Oxford, which has the potential to become an insufferable credential fest. But it's a risk worth taking for the opportunity to chat with someone who changed the world. Plus, it would surely be great fun to pester Berners-Lee with stupid tech support questions. "Sir Tim, I think my Web is broken. See this link. It doesn't work. Could you take a look at it? After you finish chewing would be fine. I can just move your plate and put the laptop where you can see it better..."

Finally, I would invite Heather Knight. There's the obvious synergy with Berners-Lee -- "You're a knight? So am I!" -- but more significantly, Knight makes awesome robots. She's working on her doctorate at Carnegie Mellon's Robotics Institute while also running Marilyn Monrobot Labs, "which creates socially intelligent robot performances and sensor-based electronic art." While Google's robot companies figure out military applications for their bots, Knight is working on entertainment applications. I'd make sure to encourage her to chat with Dugan, in the hope that Google might decide to make its robots like Atlas less threatening. At the same time, think how awesome would it be to see Knight projects like the cuddly Sensate Bear turned into a military killing machine that gallops like Boston Dynamics' Big Dog. (I'm kidding, of course -- it would be too evil to weaponize cuteness. We're still trying not to be evil, right?)

So there it is, a rather eclectic group. But it would be an interesting evening, if they actually showed up. No one would be more surprised than me.

Thomas Claburn has been writing about business and technology since 1996, for publications such as New Architect, PC Computing, InformationWeek, Salon, Wired, and Ziff Davis Smart Business. Before that, he worked in film and television, having earned a not particularly useful ... View Full Bio
We welcome your comments on this topic on our social media channels, or [contact us directly] with questions about the site.
Comment  |
Email This  |
Print  |
RSS
More Insights
Webcasts
Fintech at SaaS speed: Navigating the scale & security challenge
4 Practical Tips for Building a Data Lake
More Webcasts
White Papers
Best Practices Guide to Containers/ Kubernetes Security
Guide to Enabling 5G Deployments
More White Papers
Reports
Future Proofing Your Network for 5G
Cortex XDR Rides the Forrester Wave as a Leader
More Reports

>I would invite Steve Ballmer.

You'd need to give him a hat so as not to confuse him with the turkey. ;-)

@Thomas: If there's still room at the table, I'd like to bring along:

Stephen Hawking - imagine hearing his theories through a haze of triptophan?

Brian Eno - a music techie beyond compare, he could set Stephen's words to song

This year I'd invite Michael Dell. He must have great stories to tell about what he can do now that the company is private again. Maybe he can bring some barbeque, too.
Reply  |  Post Message  |  Messages List  |  Start a Board

I would invite Steve Ballmer. He's guaranteed to bring conversation and energy to the dinner table. Maybe too much energy. But even if he goes into sweaty yelling mode, at least the tryptophan would sedate him.
Reply  |  Post Message  |  Messages List  |  Start a Board
InformationWeek Is Getting an Upgrade!