While other CIOs struggle to align technology with "the business," Tim Stanley has made the two indistinguishable at Harrah's Entertainment.
J. Nicholas Hoover
Senior Editor, InformationWeek Government
December 08, 2007
CHIEF INTEGRATION OFFICER
Harrah's has grown more than fivefold since the mid-1990s, mostly by gobbling up properties including Imperial Palace Hotel and Casino, Barbary Coast, Horseshoe Gaming, and its biggest prize, Caesars Entertainment. Along the way, Stanley has played a hands-on role. "One of the things Tim was able to do quickly was accomplish pretty complex integration challenges," former Harrah's CEO Phil Satre says.

When Harrah's began buying properties and companies, the technology integration process tended to be drawn out--one property at a time. Harrah's would convert a casino to fit into its IT infrastructure, then another and another. "If that had to be the process when we bought Caesars, we'd all die of old age before we finished that," Loveman says.

Rather than having to rebuild at every step, Stanley's team created an architecture based on Tibco Software middleware to connect systems at new properties to those at Harrah's. It integrated all of Caesars' dozen-plus properties with those of Harrah's in about a year, less time than it took to integrate one Atlantic City property in 1998. The integration was especially meaningful to Stanley because it validated the company's investment in sophisticated CRM capabilities. When Harrah's asked IT team members at Caesars if they wanted to keep their own budding customer-rewards program, they decided against it. The reason? They told Stanley that they'd been trying to replicate the Total Rewards program for years without violating the company's patents on it.

Looking ahead, Stanley expects to apply his experience and skills as Harrah's expands internationally. "I'm heavily involved in not only thinking about where we are and where we're going, but the approaches we're going to use to bring new developments or third parties into the fold in terms of how we operate," he says.

Will he be successful at parlaying lessons learned in Vegas to venues around the world? The odds are in his favor. 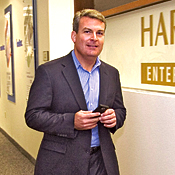 Photo by Kim Kulish
Big Thinker
"If you are to be successful, you should be a thought leader in terms of advocating a point of view as well as rounding out the broader company strategy."

My Role
"Part of it's evolving into a CTO role where you're actually thinking about or developing the products for customers. In an increasing number of cases, ours are heavily technology-driven."

Make Acquisitions Happen
"I'm heavily involved not only in thinking about where we are and where we're going, but when we've made decisions, going after certain markets, the approaches we're going to use to bring new developments or third parties into the fold. ... In almost every case, part of the value proposition has been putting our capabilities and systems into it."

New Ideas
"I generally subscribe to this approach: Let's get in the game, work a little bit, and through the course of that we'll figure out what the opportunity and the challenge are."

What Keeps Me Up At Night?
"Clearly, security, data privacy, and such are the top two or three topics that I'm concerned about. One can never be too focused or too cautious in this area."

Data Churn
"Our data warehouse is somewhat on the order of 20 Tbytes in terms of structure and architecture, but the level of turn of that information is many, many, many times that each day."

Think Small
"I challenge my team and myself to think small. I like to maintain a personal and team dynamic and a cultural sense of nimble, small, collaborative, and interactive."