Nanoengineers (yes, that's a thing) from UC San Diego have created microscopic fish powered by hydrogen peroxide that use magnets to steer themselves. Here's how they can help keep us healthy.

They might be the best fish you put into your body since Pepperidge Farms made rainbow cheddar goldfish. They're microscopic robot fish that are 3D-printed and used to remove toxins from your body or deliver medicine. And they're real.

Nanoengineers (yes, that's a thing) from UC San Diego have created microscopic fish powered by hydrogen peroxide that use magnets to steer themselves. They are among the first microrobots made from more than one material, and they have a complex shape and design. Most previous designs have been cylindrical or spherical in nature and had difficulty propelling themselves.

The fish are made from platinum and iron oxide particles, which particles can remove toxins from water and maybe one day from our bodies. They're 30 microns thick. Compare that to a human hair, which is about 75 microns across, depending on the person.

The "fish" are powerful enough to swim through your bloodstream, removing toxins or bringing medicine directly to crucial parts of your body, as cells in your blood stream do. Given enough time, the fish could be used to deliver drugs directly to cancer tumors or parts of your body that are too fragile for surgery. Cancer, hepatitis C, and Parkinson's have all been considered prime candidates for targeted cures from such a technology.

The best part of the fish is that they are 3D-printed, so you can print out hundreds of them per second. You can easily produce whole armies (should I say schools?) of robotic fish to fight off a toxin. Here they are glowing red from ingesting a toxin in a test solution. 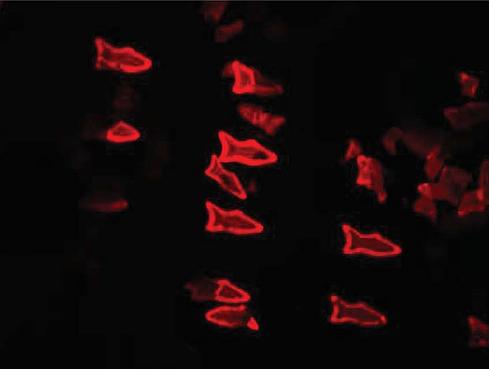 Because the fish are 3D-printed and the process digitized the engineers can produce an endless variety of shapes rather quickly. They've also experimented with sharks and rays. Of course, the engineers picked hydrodynamic shapes like fish because the robots move in liquid. But technically you could make one look like a house or horseshoe if you wanted. It is possible certain shapes will be required for specific diseases in the future.

Nanobots have long been thought to be the path to curing diseases that are otherwise difficult to cure. Ray Kurzweil has famously predicted that nanobots are potentially the cure to death. They could run through our bodies correcting the errors in our DNA. Until recently, we had no ability to make a robot like this useful.

In January, UC San Diego was also the first school to implant a nanobot into a person and have it deliver a payload. Those nanobots were less sophisticated than the fish. Technically the fish are microbots, but realistically they might be small enough to get Kurzweil's vision accomplished. It shouldn't be too long before we can make them even smaller.

Combine the payload delivery of the earlier experiment with the mobility of this current experiment and you are really on to something, especially if the fish can shrink in size.

Of course, nanobots are often the source of speculation about the death of all humanity. There is the "grey goo" theory that one day nanobots will learn to self-replicate and quickly eat everything organic on the planet in a never-ending urge to procreate.

There are several explanations about why this couldn't happen, including the fact that we could stop it with a fairly simple electromagnetic pulse. But it is fun to think that with this step toward a viable 3D-printed microscopic delivery device we are either one step closer to curing all the diseases of mankind or one step closer to just destroying ourselves entirely. Or both.

What do you think? Do you believe one day microscopic schools of fish will keep you alive forever, or at least cure your cancer? Or would you rather eat Pepperidge Farm goldfish? Comment below.

David has been writing on business and technology for over 10 years and was most recently Managing Editor at Enterpriseefficiency.com. Before that he was an Assistant Editor at MIT Sloan Management Review, where he covered a wide range of business topics including IT, ... View Full Bio
We welcome your comments on this topic on our social media channels, or [contact us directly] with questions about the site.
Comment  |
Email This  |
Print  |
RSS
More Insights
Webcasts
Monitoring the Invisible - Digital Experiences in a Zero Trust World
Leveraging Infrastructure as Code to Streamline Security & Operations
More Webcasts
White Papers
Privileged Account Management for Dummies
How Secure Are Your Endpoints?
More White Papers
Reports
SANS 2021 Cloud Security Survey
Why You're Wrong About Operationalizing AI
More Reports