The BrainYard - Where collaborative minds congregate.
Venkatesh Rao
Contributor
January 28, 2009
I promised in December that I would share a social media capability maturity model that I've been sketching out, so here goes. Capability maturity models (CMMs) are a standard part of our conceptual vocabulary when talking about organizational change, but applying the idea to social media presents some special problems which I need to discuss first. It is not a simple matter of drawing a little evolution curve and labeling some arbitrarily chosen levels of competence. In other words, if you are thinking in terms of a diagram like this (with indicators like "Level 1.2: some employees blog; Level 1.8: many employees blog, most people twitter"), STOP! 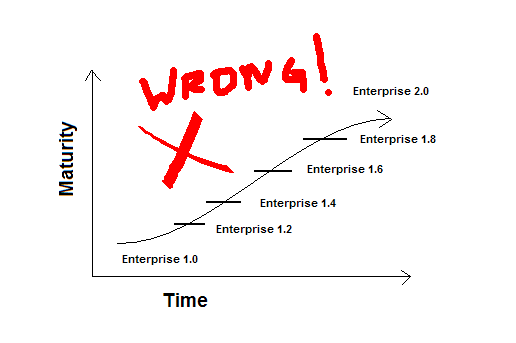