Acura, the luxury division of Honda, has started testing a hybrid sedan named the RLX Sport Hybrid SH-AWD, which offers self-driving capabilities. The company is gearing up to release a version of it by 2020.

Acura, the luxury car division of Honda, took the wraps off its second-generation autonomous vehicle, a test sedan called the RLX Sport Hybrid SH-AWD. The unveiling kicks of the company's plans to introduce self-driving vehicle functionality by 2020.

Developed by the Honda Research Institute USA (HRI-US), the RLX features a new suite of radar, Lidar (a surveying technology that measures distance by illuminating a target with a laser light), a camera, and GPS sensors.

As part of the May 18 announcement, the company disclosed that it would begin testing and honing its autonomous driving systems at the GoMentum Station -- a 5,000-acre testing ground for connected and autonomous vehicles at the former Concord Naval Weapons Station in Concord, Calif. 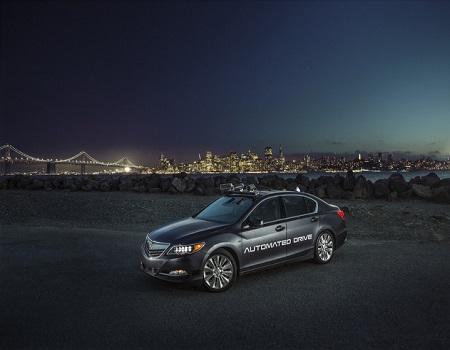 Using a concept called sensor fusion, where the vehicle fuses overlapping information together from various sensors, test engineers can validate information from each signal with a higher degree of accuracy than could be obtained from any one sensor independently.

The test vehicle comes equipped with radar sensors and other technology Acura has already applied to its commercially available cars through its AcuraWatch safety and driver-assistive suite.

Acura faces some stiff competition in the race to bring autonomous vehicles to public roads. Google has had test vehicles on the road in California and Austin for more than a year now, and may soon start tests in London.

[Read about Apple's China investment and whether it's a prelude to Project Titan.]

Recently, Google announced that it is looking for candidates in and around Phoenix to test its self-driving cars. These people will be responsible for operating a driverless vehicle for six to eight hours per day, five days a week.

In addition to the race to the production line, there's also been some serious jockeying for talent. The high-stakes race to develop mass-market electric vehicles and the technology behind self-driving vehicles, has spurred a fierce battle for top minds at Apple, Google, Ford, and Tesla Motors.

As part of a series of events marking BMW's 100th birthday, CEO Harald Krueger announced plans to release an electric self-driving car in 2021 called the i NEXT that will serve as the company's flagship model.

BMW has been making strides towards autonomous vehicles during the past decade. In 2006, a company test vehicle autonomously completed a lap of the Hockenheimring racetrack, and in 2011 a BMW drove on the A9 autobahn from Munich towards Nuremberg without any driver intervention.

Nathan Eddy is a freelance writer for InformationWeek. He has written for Popular Mechanics, Sales & Marketing Management Magazine, FierceMarkets, and CRN, among others. In 2012 he made his first documentary film, The Absent Column. He currently lives in Berlin. View Full Bio
We welcome your comments on this topic on our social media channels, or [contact us directly] with questions about the site.
Comment  |
Email This  |
Print  |
RSS
More Insights
Webcasts
The Experts Guide to Ransomware Response
Multi-Cloud Data Management for Modern Applications
More Webcasts
White Papers
Intelligent Outcomes Are Key to Business Resilience
A Decade of Passive DNS
More White Papers
Reports
Intelligent Outcomes Are Key to Business Resilience
The InformationWeek 2021 State of ITOps and SecOps Report
More Reports