Amazon has been given a license by the FCC that will allow it to test drones in a way that will be completely useless.

My wife can get her baseball bat ready, because Amazon has received a special FAA license to test drone use for package delivery. This idea is Geekend-approved, but not everyone is happy. One survey showed a whopping 88% of consumers were ready for drone delivery if it meant they got their stuff in an hour. Opposers, however, like my wife who threatened to bat down any drones coming our way even if they were delivering stuff for me, have visions of drones crashing to Earth like great fireballs.

If you want a serious discussion on why drones may not be the best way to deliver packages, read the article in which I interveiwed logistics expert Maria Haggerty. If you want to talk about a futuristic sky full of drones or flaming wreckage, hang out here. That's what we do on the Geekend.

Here's the thing about the FAA ruling. It is boring. Yawn. Boring. All the agency is giving Amazon permission to do is test drones during the daytime, no higher than 400 feet, and always within the view of the pilot. Really, all it approved is for Amazon to pay people to fly RC helicopters for fun. I want this job. It is going to look something like this:

OK, I'm sure the drones are more sophisticated. I bet they can lift the whole tub of popcorn. And that's the real problem. While it seems like a big deal, this is such a small test that it will not assess the limits of drones, Amazon, its pilots, or even the idea of package delivery.

[ Want to know what's in store for IoT? Read 8 Ways IoT Will Change IT Forever. ]

In reality, the only way Amazon makes this test work and still follows the rules is if it puts a bunch of drones in the back of a van with some packages. Then the pilot will pull up near someone's house and fly one of the drones off the back of the truck to the porch. That's it. All it saves is the muscle it takes to move the package to the steps. And frankly, I think it probably takes more time for the drone to fly there and land softly than it takes a person to drop the package. The fun part will be getting the drone to ring the doorbell.

To do this right, Amazon needs to be allowed to do some honest-to-goodness 21st century Jetsons-like stuff. It needs to be able to launch a self-flying drone (or at least one flown remotely by camera) from the warehouse to the front steps. Anything else doesn't take the van or the driver out of the equation. It just adds a pilot.

Without getting to do it for real, it isn't a real test. Sure, maybe this is considered step one, but it is really like a baby step before a real step. A half step. A real step would be picking a suburban area without much air traffic or major skyline to deal with and letting the drones deliver packages by remote in that town. Without that, Amazon might as well try this:

The company should have the right to at least try to fail like this:

What are we really afraid of? Accidents? A car accident means tons of steel ramming into each other at highway speeds. This happens every day. A drone accident means a few pounds of plastic and Styrofoam and a very light cardboard box just might land on someone. Sure, it will happen eventually, but think of the odds. In a suburban setting there are millions of square feet and a handful of people. What are the chances it really lands on someone?

Sure, I'm minimizing it. But really, we're worried about drone crashes when there will be a couple hundred in the air? About 20,000 jet airliners are in the air at peak hours, and we don't sit and worry about one of them crashing on our heads.

I'm more concerned that some drone operator uses his cameras to look in on the neighbors taking a shower than I am about drones falling from the sky. I'm sure the site will be called Amazon Prime Viewing. But hey, I'd show the world my tush for quicker package delivery if I thought it wanted to see it. And so would 88% of consumers. Well, that wasn't in the survey, but it is an educated guess. 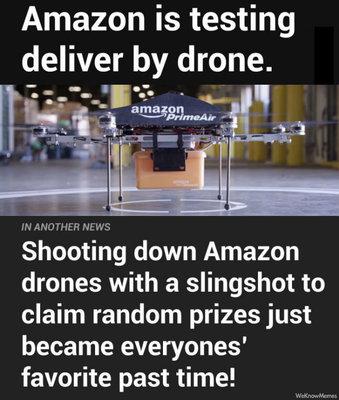 OK, so I'm not taking it very seriously. But with this test, why should anyone? Here's the real question: Which would you rather have — more trucks on the road or some drones in the sky taking trucks off the road? The future of travel is three dimensional. We've got no more 2D room. We can't widen the roads in most cities any more than they are. The only way to go is up. If we can't do that, we're slowly going to grind to a halt.

Flying cars aren't ready. Flying packages might be if we give them the chance. We'll never know if we don't get to really try.

David has been writing on business and technology for over 10 years and was most recently Managing Editor at Enterpriseefficiency.com. Before that he was an Assistant Editor at MIT Sloan Management Review, where he covered a wide range of business topics including IT, ... View Full Bio
We welcome your comments on this topic on our social media channels, or [contact us directly] with questions about the site.
Comment  |
Email This  |
Print  |
RSS
More Insights
Webcasts
People Are The Most Important Part of Autonomous SOC
Nip Ransomware in the FUD: Detecting Attacks Pre-Encryption
More Webcasts
White Papers
How to Build Your Incident Response Plan
Anatomy of a Modern Phishing Attack
More White Papers
Reports
Gartner Market Guide for Insider Risk Management Solutions
How IT Security Organizations are Attacking the Cybersecurity Problem
More Reports

@Dave    I agree. This testing make little sense. It was a fun option to consider months ago when the idea was only a twinkle in the eye of Amazon's CEO.

But adding more conjestion to cities already heavy with it just doesn't seem to be too practical. I am glad your wife is ready to smack them out of the air ( even if it is for you ) - I was going to ask if I could borrow the bat. But she probably will need it.

@greenthoughtsco: Maybe? Since FAA was dead set against any drones for that matter because it had too many vulnerabilities.
Reply  |  Post Message  |  Messages List  |  Start a Board