Amazon Echo Wants To Talk With You - InformationWeek

With its invite-only beta phase behind it, Amazon Echo will be available for sale in the US next month with several new features, including connected-home options, Google Calendar, and Audible Audiobooks.

After an invite-only beta period that began late last year, Amazon Echo is ready to ship to US customers on July 14. While the "smart home" product is initially designed for consumer use, its long-range voice detection capabilities and improved voice recognition could spawn applications for enterprise, government, and healthcare workers, especially in areas where hands-free functionality is required.

The product was initially introduced with handsfree voice control for music, information from Wikipedia and the web, weather, timers and alarms, news, and shopping/to-do lists. It's been described as a "microphone and speaker system that lets you talk to Amazon's cloud and get answers, news, and music." It's what Apple's Siri or Microsoft's Cortana might look like if those services weren't embedded in your smartphone. 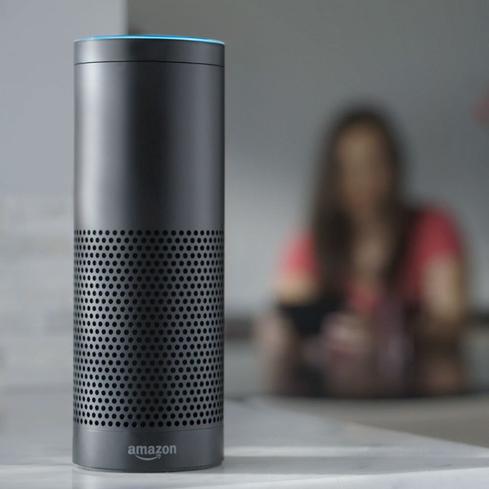 Since its beta phase began in November, several additional services have been added, including the ability to access Google Calendar, Audible audiobooks, and to act as a hub for connected home devices.

Amazon Echo, which has a list price of $180, looks like a small cylindrical speaker, and has a 2.5-inch bass reflex system and a 2-inch tweeter stuffed in there. The seven microphones at the top are present to listen to voice commands that start with the activation phrase "Alexa" (I wonder if Billy Joel's daughter gets a cut?). Once the voice commands are parsed, they are sent out to the cloud – specifically to Amazon Web Services. Echo supports 802.11a/b/g/n WiFi networks, but does not support connecting to ad-hoc (or peer-to-peer) WiFi networks. Power comes from a plug-in power supply, so the device is always on standby.

Content from mobile devices that meet the Bluetooth Advanced Audio Distribution Profile (A2DP) standard can be streamed by Echo, but not devices controlled by Mac OS X. This Apple snub extends to music streaming, which is generated by Pandora, along with the TuneIn and iHeartRadio services. Of course, the Amazon Music Library will be available to Echo.

Though Amazon said Echo needs an activation phrase, some privacy advocates have wondered about this kind of product (along with GoogleNow and Smart Barbie) monitoring conversations while it is in standby mode waiting for its activation phrase. Amazon has not yet issued any comments precluding such monitoring, though its press statement said: "Echo uses on-device keyword spotting to detect the wake word. When Echo detects the wake word, it lights up and streams audio to the cloud, where it … recognizes and responds to your request." If the wake word detection is done inside the device without a cloud connection, it would limit the possibility of being a monitor.

Echo may be a way to bring voice control into the consumer mainstream. It has some useful but limited functionality, and a price point to match its capabilities.

Larry Loeb has written for many of the last century's major "dead tree" computer magazines, having been, among other things, a consulting editor for BYTE magazine and senior editor for the launch of WebWeek. He has written a book on the Secure Electronic Transaction Internet ... View Full Bio
We welcome your comments on this topic on our social media channels, or [contact us directly] with questions about the site.
Comment  |
Email This  |
Print  |
RSS
More Insights
Webcasts
Bolstering Your Enterprise Cyber Risk Assessment
4 Practical Tips for Building a Data Lake
More Webcasts
White Papers
Why You're Wrong About Operationalizing AI
VPN Risk Report
More White Papers
Reports
Future Proofing Your Network for 5G
2021 Application Security Statistics Report Vol.2
More Reports

Quite so. One small step, but in the right direction.
Reply  |  Post Message  |  Messages List  |  Start a Board

Well, maybe it can send a control signal to some smarthome device via a remote.

But the niche seems to me to be local use via speech recognition. It's just do easy to do that. Don't have to power up the computer or phone. Just say what you want it to do
Reply  |  Post Message  |  Messages List  |  Start a Board

Well, that's the business models of "freemium" games isn't it? Get them in the door and charge for the upgrades. This boosting of AWS is a really smart and strategic move for them though, since Google's Cloud Platform is starting to take off.
Reply  |  Post Message  |  Messages List  |  Start a Board

I think that they hope Echo will lead you to their door when you shiop.
Reply  |  Post Message  |  Messages List  |  Start a Board

Amazon is trying to build a new platform. I wrote a story yesterday (which got lost in email, but should be up soon) about how it is unbundling Alexa from Echo. This is an exciting move in many respects. Yes, you have to use the Amazon cloud (its free for the first year) but its the start of using voice control for consumer products beyond a smartphone.
Reply  |  Post Message  |  Messages List  |  Start a Board

What I know for sure, I put in the peice. Amazon did let out an SDK for developers that they blithely assure will lead to new functionality, but I have heard this before. We all have. Let's see what someone comes up with, and how they are going to be able to make any money off their efforts.
Reply  |  Post Message  |  Messages List  |  Start a Board

Amazon really really hopes you do love that. For them, it's a way around all the other shopping choices you have--bricks-and-mortar and internet-- that opens only to their front door.
Reply  |  Post Message  |  Messages List  |  Start a Board

That kind of ubiquitousness is exactly what they were shooting for. Voice control of an item can be very addicting because we are used to talking. No learning curve to it.
Reply  |  Post Message  |  Messages List  |  Start a Board

There is a "gee whiz" factor here that may appeal to the broad, less sophisticated consumer. It's like talking to the Star Trek computers. If you have never had any of the other gizmos that are so prevalent today, this may be your gizmo.

Although Amazon promises new functinality will be coming from developers, what they have now is all that people can count on for sure. And while there is definite functionality present, other devices have the same abilities as well.
Reply  |  Post Message  |  Messages List  |  Start a Board
Page 1 / 2   >   >>
InformationWeek Is Getting an Upgrade!

IT Leadership: 10 Ways to Unleash Enterprise Innovation Lisa Morgan, Freelance Writer,  6/8/2021
White Papers
Why You're Wrong About Operationalizing AI
Research from STL Partners and Vertiv Reveals Why Telcos Should Prioritize Efficiency and Sustainability in 5G Network
Why Energy Management is Critical to 5G Success
Future Proofing Your Network for 5G
VPN Risk Report